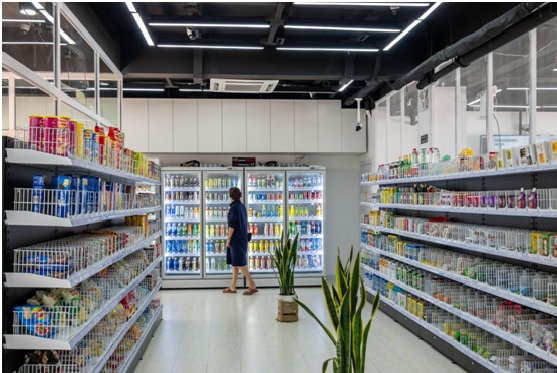 The Chinese retail sector, especially the supermarket business, has been severely impacted by the COVID-19 pandemic since early 2020.

However, convenience stores bucked the trend.

The sales of Chinese convenience stores have maintained a rapid growth of more than 10 percent for three consecutive years, according to a recent report jointly released by the China Chain Store and Franchise Association and KPMG.

Compared with bigger-sized supermarkets and department stores, convenience stores feature longer operation hours and a high degree of automation. They are very popular in densely-populated megacities where large numbers of business districts and office buildings are constructed.

They have played a critical role in the supply of consumer goods since the outbreak of COVID-19, thanks to their wide distribution and mature supply chain. The report said consumers prefer brick-and-mortar retailers that are close to them and less crowded due to the pandemic, and that’s why convenience stores have come into favor.

Besides, convenience stores also enjoy many advantages in the new retail model of one-click ordering. They are able to deliver food, beverages, fruits and vegetables, groceries, as well as medicines to the doorsteps of consumers within an hour through third-party deliverers or their own logistics systems.

According to statistics, in the first seven months of this year, convenience stores saw a year-on-year growth of 39 percent in orders on Meituan, a Chinese shopping platform for locally found consumer products and retail services. One-click ordering has become a new choice for consumers.

In May last year, the Ministry of Commerce said the country would build 15-minute community life circles and introduce more convenience stores into neighborhoods. It also encouraged major enterprises to give a boost to the sector in terms of branding, standard-setting, management and services. It also stated that major enterprises shouldcooperate with local governments and communities to further integrate themselves into urban public services.

Beijing is seeing an accelerated and integrated development of consumer services. According to an official with the Beijing Municipal Commerce Bureau, the Chinese capital had over 90,000 providers of consumer services at the end of last year, including convenience stores and barbershops. They covered almost all communities in Beijing.

In Nanjing, east China’s Jiangsu province, large numbers of charging poles, convenience stores and wet markets have been built, which not only smooths the “micro cycle” of the urban economy, but also facilitates the life of the citizens.

Insiders believe that convenience stores, seeking high-quality development, will go beyond the scenarios of traditional retailing and become a “generalist” in consumer services.