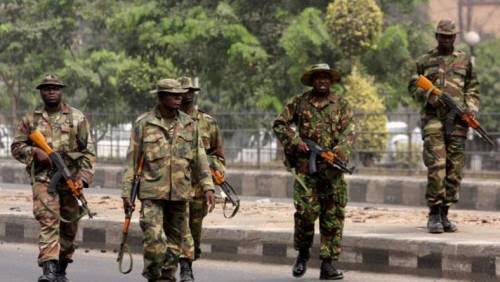 The Save Human Advocacy Centre (SHAC) has hailed the Nigerian Army for another timely intervention in a crucial period to save Nigerians from impending collapse to the dreaded Corona virus.

The SHAC believes the Army’s proactive response to enforce the stay-at-home order could ultimately be the game-changer as the country edges towards victory over the pandemic.

Coronavirus has swept across the world, killing thousands and forcing millions into quarantine. Several nations have activated armed forces to help combat it.

The U.S., French and Moroccan armies have set up field hospitals, and Russian President Vladimir Putin ordered the army to carry out drills to increase its readiness.

Led by Chief of Army Staff Lieutenant General T.Y Buratai, the Army is ensuring that Nigerians adhere to President Muhammadu Buhari’s lockdown order in Abuja, Lagos and Ogun; doing so within the ambit of the law.

In a statement signed by Executive Director, Dr Grace Gyang, SHAC praised the Army Chief for going a step further to set up up toll free lines and help desk to checkmate suspected human rights abuses.

According to the group, Lt. Gen. Buratai has again proven that he is after the protection of the lives of Nigerians whether in war situations or on public health issues like now.

“ By the figures SHAC monitored on April 5, 2020, through a special website called ‘Worldometer,’ Nigeria’s Covid-19 cases are 224; we have recorded 5 cases of deaths and 32 recoveries in nearly two months since the first case was discovered. NCDC has tested over 4,000 cases. This is not time to joke with our lives! It means God Almighty is very merciful to us and we are obligated to appreciate Him through our actions and conducts,” the statement said.

“At this point, SHAC is commending the Nigerian Army in safeguarding Nigerians in this precarious time by enforcing the stay-at-home order. We are also pleased by the Army’s initiative of setting up toll free lines and desk to checkmate suspected abuses of Nigerians by any of its personnel in implementing the lockdown to prevent the spread of Covid-19.

“SHAC is infinitely proud and appreciative of the leadership offered by the COAS Lt. Gen. TY Buratai. For the umpteenth time, Gen. Buratai has proven to Nigerians that he is after the protection of the lives of Nigerians whether in war situations or on public health issues like now.

“We endearingly salute the proactive initiatives by Gen. Buratai, which actively responded to the genuine concerns raised by well-meaning Nigerians on restriction of movement to tame the spread of Covid-19. Or else, by today, and without the action of the Nigerian Army, Nigeria would have been in the same ditch of mess over Covid-19 with countries like Italy, Spain and America among others. We live in a panicked world now!.”

SHAC, however, welcomed the COAS’ resolve to investigate alleged human rights abuses against his officers and soldiers.

The group advised Nigerians, though, to allow the Army investigate and punish those found wanting within its laid down laws while they also do their best to ignore fake news.

“ SHAC is appealing to the understanding of Nigerians that in every organization or institution, there are deviants. The COAS is not unaware of the few cases where some soldiers abused or violated the human rights of some Nigerians in the course of enforcing the stay-at-home order as directed by the FGN and state Governments,” it said.

“ The issues are on his desk. And Gen. Buratai has ordered and arrested the suspected soldiers for unprofessional conduct as he has always done even in instances before now. The soldiers are currently subjected to military interrogation to ascertain the veracity of the claims and culpability of the soldiers.

“ And if found wanting in the reported cases of abuse of civilians, the trusted Gen. Buratai will not be hesitant to discipline or punish them in accordance with laid down Military laws. We again appeal for calm and understanding from all Nigerians. We all need our supports in this difficult period.

“ Perhaps, before we conclude, the general public must be watchful about the activities of fake activists who are out to blackmail the military and Nigerians. These emergency or contracted activists are unto their usual business by dusting up old pictures of soldiers’ brutality of civilians and doctoring them to tarnish the image of the Nigerian Army.

“ These pictures and videos have gone viral on social media platforms to poison the minds of Nigerians against soldiers. But we must be clear-eyed to discern the fakeness and ensure that we are not misled by such dubious elements and their gimmicks.

“ SHAC is disclosing to the public that Nigerians who have difficulties reaching the Nigerian Army Human Rights Desks nation-wide can reach us over their problems in this period. We have equally launched a situation room to monitor issues of human rights abuses by all security agencies participating in the Covid-19 lock down across the country and not just the Army. We are concerned; all Nigerians are concerned.

“ Finally, we enjoin all Nigerians to support the federal and state governments by observing the stay-at-home order. We should resist the temptation of being used by dubious elements to disturb the peace of the country through Covid-19. We are just trying to overcome Boko Haram and as a nation, we cannot afford another round of mass deaths in whatever guise.”