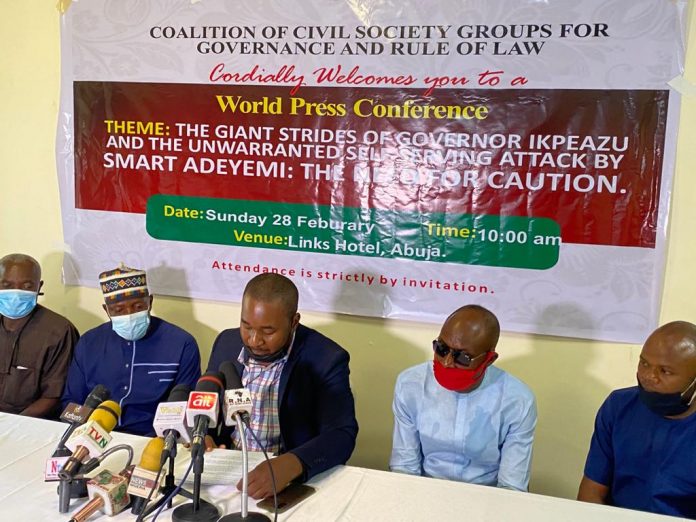 The Coalition for Good Governance and Rule of Law (CGGRL) has advised Senator Smart Adeyemi to apologise to Chief Okezie Ikpeazu over his recent attacks targeted at the Abia State Governor.

The coalition described Sen. Adeyemi as an extremely and suitably opportunist in the Senate, tumbling with verbal diarrhea.

Recall that the lawmaker representing Kogi West Senatorial District had, on Tuesday, during a plenary session described Ikpeazu as a drunkard.

However, the CGGRL at a press conference on Saturday in Abuja by its leader, Chief Isaac Ikpa, said Adeyemi and his state governor, Yahaya Bello are no match for Ikpeazu.

Chief Ikpa noted that Adeyemi has no known legacy in his constituency to showcase for his three tenures in the National Assembly to commensurate with the billions of naira he has received.

Ikpeazu, on the other hand, according to the group is one of the shining lights of modern leadership in Nigeria today.

Instead of look the way of Ikpeazu who has excelled in developmental projects, the group charged Adeyemi to criticise Yahaya Bello for his indebtedness of salaries and pensions in Kogi state.

The coalition, therefore, warned the lawmaker that failure to publicly apologise would “compel us to take further steps to test the liberty of freedom of speech in the Nigerian parliament in the judiciary”.

Let us specially welcome you to this unique Press Conference in the name of Almighty God, our guardian and protector.  Nigeria and all of us are protected by His unalloyed grace!

Its unique in the sense that this is the first time the Coalition of Civil Society Groups for Good Governance and Rule of Law (CSOGGGRL) would come out and rise unanimously to caution the irreligious mouthing of a serving Senator of the Federal Republic of Nigeria in the National Assembly (NASS), identified as Sen. Smart Adeyemi. We pardon him, if he ever grew up in some slums. But he should not export such ghettoish mentality or desecrate our parliament.

We were dismayed that this Senator threw decency to the dogs in our hallowed chambers to puke nonsensically at Gov. Ikpeazu, defying the sanctity of the hollowed chambers and its operative regulations on the executive Governor of Abia state, His Excellency, Chief Okazie Ikpeazu.

CSGs has never imagined that the Senate Chambers of Nigeria by today is a meeting ground for hooligans and miscreants with borrowed political garbs, to abuse the plenary session or NASS complex’s immunity by insulting other leaders as done by Sen. Adeyemi.

We interpret Sen. Adeyemi’s comments, tarnishing and libeling Gov. Ikpeazu as a “drunk” very uncomplimentary and derogatory.  But we have no reason to blame Sen. Adeyemi, because in life, he believes it’s all about the “cut and join” certificates he has paraded over the years to become the National President, Nigerian Union of Journalists (NUJ) in the Obasanjo Presidency.

So, it’s understandable that Sen. Adeyemi has no secured self-personality or public clout outside his small world of fakes. Adeyemi is perpetually threatened when formidable leaders are concerned and its perpetual with him over the years.

Adeyemi’s only delight is castigating and maligning those he perceives as enemies like he has done to the solid personage of a leader like Gov. Ikpeazu, who properly brought up himself, as a biochemical pharmacologist with an academic doctorate degree. But we don’t fault Sen. Adeyemi because his upbringing is clearly defective.

If Sen. Adeyemi has to pair up himself with Gov. Ikpeazu today, would Smart be telling Nigerians that he never went to a known primary or secondary school, but catapulted first to a post-graduate diploma in Public Relations, diploma in Law, advanced diploma in Mass Communication, and master’s degree in Public Administration from Federal University of Technology, Owerri, when he became a Senator, probably from a satellite campus?  People like him would never respect talents as embodied by Gov. Ikpeazu.

Thus, Smart, as he prides his name, became a journalist (or broadcaster) and jiggled his way into Journalism, rising through his crooked ways to become NUJ National President.  He left NUJ in the worse posture as we find it today, by leading journalists on what he termed nation-wide tour and verification of  “democracy dividends,” in the Obasanjo Presidency.

Sen. Adeyemi amassed a lot of wealth for himself and when his tenure expired as NUJ national President, he pushed the illicit monies acquired on the field into contesting Kogi West Senatorial district in 2007. Like Sen. Dino Melaye, like Sen. Smart Adeyemi, the constituents’ of Kogi West senatorial districts are unfortunate to always have wayward Senators representing them at NASS.

As we speak today, Sen. Adeyemi has no known legacy in his constituency to showcase for his three tenures in NASS commensurate with the billions of naira,  he has received as constituency funds;  just like his predecessor, popularly known as “Dino.” The idea of leadership known to these fellows is personal enrichment against the people and expect every one to become a cheer-clapper in the crowd of sycophants around them.

Therefore, when genuine leaders like Gov. Ikpeazu deliver leadership to their people, its natural that the likes of Sen. Adeyemi would get offended and classify them “drunkards.”  The mindset of Adeyemi is that every leader of the people in Nigerian today should be deceptive like him and he finds Gov. Ikpeazu an automatic enemy for trying to transform Abia state. Only God Almighty knows when Sen. Adeyemi would become Governor of his home state of Kogi.

We now understand why Sen. Smart supports his state Governor, Alhaji Yahaya Bello, who is variously and consistently rated by Nigerians as Nigeria’s worse Governor after Benue’s Gov. Samuel Ortom.  But we wish to appeal to Sen. Adeyemi that no one is at war with him at the moment.

So, he should discard his penchant for uncomplimentary comments about the Governor of Abia State and other leaders in that state or elsewhere in Nigeria. Sen. Smart Adeyemi is a three-tenured Senator in NASS and still serving, but no bills to his pride. We challenge him to disprove us. We cannot silently accept his descent into barbarism, animalism and insults on the concept of parliamentary sovereignty all over the world; much less on Gov. Ikpeazu.

In our considered and vetted opinions, we perceive the Governor of Abia state, Chief Ikpeazu as one of the shining lights of modern leadership in Nigeria today. It’s expected that anti-progress adversaries like Sen. Adeyemi must hate him. But Gov. Ikpeazu is a true patriot and servant-leader of his people to the core, whose leadership model should be copied and emulated by all Nigerians.

We advise Sen. Adeyemi to speak to his Governor, Alhaji Yahaya Bello to clear his indebtedness of salaries and pensions in Kogi state before he looks the direction of Abia state, where Gov. Ikpeazu has excelled in developmental projects. It’s not about salaries or pensions, we are talking about now. It’s about the people’s development!

Finally, CSGs demand an immediate apology from Sen. Adeyemi to Gov. Ikpeazu. Failure to publicly apologize would compel us to take further steps to test the liberty of freedom of speech in the Nigerian parliament in the judiciary. Only after the court’s verdict, we shall know whether parliamentary immunity includes the sort of hogwash or defamation, Sen. Adeyemi hurled at Gov.  Ikpeazu.

We thank you for your audience and journey mercies.