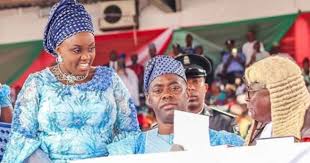 Governor Seyi Makinde of Oyo State, on Tuesday inaugurated his wife, Tamunominini Makinde as the chairman of the Oyo State Agency for the Control of Aids alongside others who constituted the board.

This was contained in a statement by the Chief Press Secretary to the Governor, Mr Taiwo Adisa.

Adisa also added that one Dr Lanre Abass was the Executive Secretary.

Adisa stated that Governor Makinde administration focuses on the health sector most especially the  HIV/AIDS. it has also ensure that people had access to relevant information, HIV testing services and access to treatment, care and support for people living with the virus.

Makinde noted that dealing with the scourge of AIDS “is of utmost importance to this administration.”

“I don’t have any doubt in my mind that we have assembled the best hands to manage the affairs of Oyo State Agency for Control of AIDS.

“I have taken time to reflect on what was the modus operandi in the past and I can say to you clearly that the state used to be supplied with medications that were just about to expire; that era should be over for good in Oyo State.”