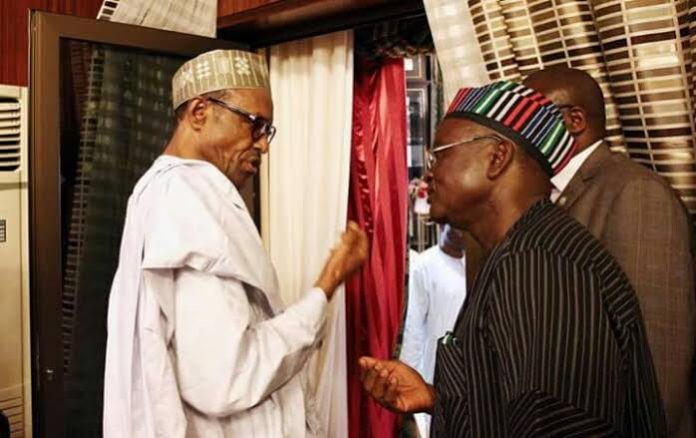 Foundation for Equity and Justice (FEJ) has condemned Governor Samuel Ortom of Benue State as displaying penchant for stoking the fire of religious and ethnic tension with his recent letter to President Muhammadu Buhari.

Ortom had accused the president of not doing enough to halt the herders-farmers conflict in Benue and insecurity in the country.

But the Foundation for Equity and Justice noted that Ortom aims to cause panic in the state and then point fingers at the Federal Government.

In a statement signed Friday by its Secretary-General, Raymond Oralu, the group said the governor, being a “herdsman” wants to monopolize cattle business in his state and would go to any length to secure that.

According to the foundation, Ortom’s claims that Buhari is a Fulani president is an insult to the sensibilities of Nigerians.

The group, however, advised the Benue governor to desist from making unguarded and unsubstantiated statements in the press and concentrate on the task of governance.

The statement further called on the Ortom to explain how he amassed assets worth over N200b in five years when it is a known fact that under him civil servants are being owed several months’ salaries and arrears.

While calling on relevant authorities to investigate Ortom, the foundation said the governor should be held responsible for the escalation of farmers-herders conflict in Benue and environs.

The Foundation for Equity and Justice is issuing this press statement given the statement credited to the Governor of Benue State, Samuel Ortom on the farmers-herders conflict in Benue state and other parts of the country.

Governor Samuel Ortom with his recent statement confirmed to Nigerians that he indeed harbours sinister motive against the Muhammadu Buhari administration concerning the farmers-herders conflict in Benue State and its environs.

What the generality of Nigerians does not know is that Governor Samuel Ortom is a herdsman who is actively involved in the cattle business since he became governor of the state. It is also common knowledge that he has been ferocious in taking control of the cattle business in Benue State and its environs hence his frequent castigation of the policies of the federal government towards the restoration of peace amongst farmers and herders in the state.

The Foundation for Equity and Peace as a body is aware of the plot by Governor Samuel Ortom to stoke tension in Benue state and thereafter point accusing fingers at the Muhammadu Buhari administration.

The recent statement where he posited that President Muhammadu Buhari is president only for the Fulanis is an insult to our collective sensibilities as a people for it is not only derogatory, it is an affront to our commonsense as a people.

The performance of Governor Samuel Ortom in Benue State is indeed woeful and as such he has elected to be clever by half by stoking ethnic tension in the state and craftily shifting attention from his inadequacies.

We wish to advise Governor Samuel Ortom to desist from making unguarded and unsubstantiated statements in the press and concentrate on the task of governance in Benue state towards availing the good people of the state the dividends of democracy.

Governor Samuel Ortom must also do well to explain how in five years he has amassed assets worth over 200 billion Naira when it is a known fact that under him civil servants are being owed several months’ salaries and arrears.

Governor Samuel Ortom is indeed the definition of corruption and multiple pieces of evidence indicate how he has continued to divert the resources of Benue State to private pockets while the people suffer untold hardship.

The Foundation for Equity and Justice is using this medium to call on the relevant security agencies to beam their light on Benue State towards unravelling how Governor Samuel Ortom has been fuelling insecurity in Benue State and environs.

The security agencies must also unravel how he has been arming ethnic militia groups that have been perpetrating violence under the cover of the state government on innocent people across the state and neighbouring states.

We know that Governor Samuel Ortom would stop at nothing to ensure that he monopolizes the cattle business in the state hence his penchant for conflict that has continued to put the lives of innocent people at risk daily.

We find such disposition from a governor of a state who should know better that part of his responsibilities is to protect the people and not subject them to a reign of terror which has remained the hallmark of his administration.

Governor Samuel Ortom must as a matter of necessity stop playing the gallery on the farmers-herders crisis when it is evident that he is the main instigator of the conflict in fulfilment of his selfish desires which remains a crime against humanity.

We hereby call on all Nigerians to hold Governor Samuel Ortom responsible for the escalation of the farmers-herders conflict in Benue state and environs as we have it on credible authority that he plans to extend his nefarious activities to other states in the country.

Nigerians must also be aware that the notoriety of Governor Samuel Ortom is legendary since his days in politics as he has been actively involved in promoting deprivation, sorrow, tears, and blood.

The Foundation for Equity and Justice is calling on Governor Samuel Ortom to retrace his steps and seek forgiveness from the people of Benue state whose lives he has turned beggarly since he assumed leadership of the state.

He must also realize that time is indeed running out for him as his gimmicks are now in the public domain and as such no amount of propaganda can erase the hard truths with regards to his penchant for stoking religious and ethnic tension.

This is a statement of the fact and we stand by our position.