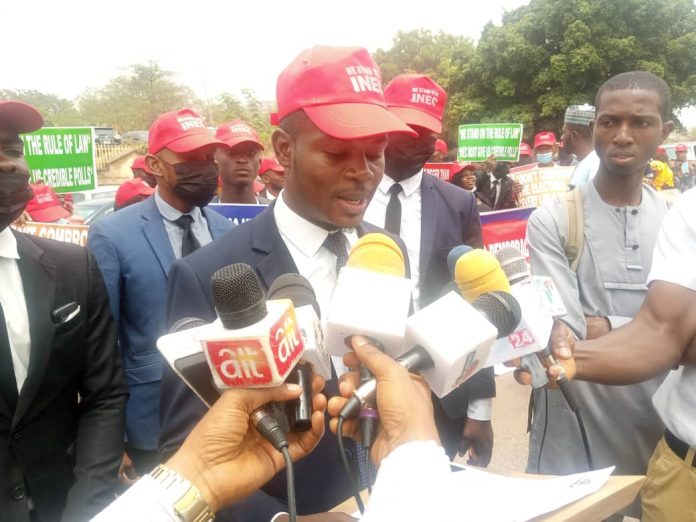 The Independent National Electoral Commission (INEC) has urged political parties and their stakeholders to obey court orders and statutory guidelines in their conduct ahead of 2023.

INEC Secretary, Rose Oriaran Anthony said this while receiving a letter from the Guardian of Democracy and Rule of law who were on a solidarity rally to the commission over the recently signed 2022 electoral law.

The secretary who received the letter on behalf of the INEC Chairman, Mahmood Yakubu assured the activists that INEC as a law abiding Commission will continue to  respect the laws of the Federal Republic of Nigeria and the judiciary in particular in all her undertakings.

She promised that all the contents of the letter will be strictly adhered to.

The Convener of the group, Chris Ukpai who presented the letter said events that culminated in the signing into law of the 2022 Electoral Act, signals a beautiful beginning for Nigerians towards entrenching and sustaining its nascent democracy.

He said the implication of the coming on board of the new electoral act signifies that moving forward, Nigeria’s democratic institutions would be strengthened, and elections would be credible, free and fair.

Ukpai said the peaceful march to INEC is intended to drive home the point that Nigeria and Nigerians are deserving of credible leadership, and this could only be achieved if the electoral umpire stays true to its name by ensuring that the votes of the people count in selecting leaders that would drive its quest towards sustainable growth and development.

He said, “at this point, we have realized that the Independent National Electoral Commission (INEC) is central to achieving this objective hence our peaceful march to its national headquarters to deliver a strong message about the implementation of the 2022 electoral act, which by all intent and purpose should not confer undue advantages to groups or individuals.

“We all know the tendencies of political parties in the country to want to bend the rules. We all know how in some instances, their first point of call is usually to INEC staff and officials. And we all know that once that is achieved, the rest becomes history as we would be subjected to the whims and caprices of selfish and greedy people who are bent on denying Nigerians the dividends of democracy.

“However, we are glad that with the coming of the 2022 electoral act, the message from INEC so far has been impressive and noteworthy. We are also pleased that INEC, under the chairmanship of Professor Mahmoud Yakubu, has displayed an uncompromising stance in the conduct of elections across the country. We believe the 2023 general elections would follow the same pattern that would deliver one of the country’s best elections in our history.

“We are using this medium to support and encourage Professor Mahmud Yakubu to lead INEC for a job well done so far, as evident in the recently released electoral timetable. It is our firm belief that a free, fair and credible election starts with the implementation of the electoral act and how the various stakeholders subsequently react to it.

“We wish to say that INEC has displayed an unalloyed commitment towards implementing the 2022 electoral act to the latter, which remains a strong indication that the 2023 general elections shall be devoid of compromise on the part of the electoral umpire.

“However, this is not to say that INEC would not come under intense pressure. But we are assured that the staffers and officials of INEC would stand on the side of democracy and the interest of the generality of all Nigerians” he said

Ukpai further urged staff of INEC to feel assured that the civil society will continue to defend them and speak for them, hence the need for them not to entertain any form of fear or intimidation in the discharge of their duties.