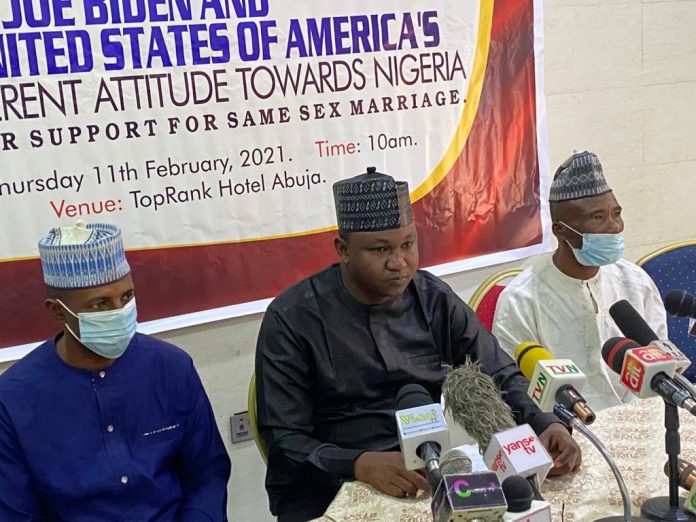 According to the centre, Biden’s threat of sanction to Nigeria and these countries is a disregard for their democratic institutions and sovereignty.

The centre made its displeasure known at a press conference on Thursday in Abuja.

In a memorandum on Tuesday, Biden instructed the U.S embassy in Nigeria and other nations to push for legislation of homosexuality in their respective countries of residence.

Nigeria, one of the nations against LGBTQ, signed a Same-Sex Marriage (Prohibition) Act into law in 2014.

But speaking on behalf of the group, Executive Director, Comrade Adamu Kabir Matazu noted that the U.S must realise that nations across the world have the responsibility to enforce the laws that govern them internally.

Matazu said if the U.S could take measures to save its democracy from pro-Trump protesters who stormed its Capitol, then every other nation should be allowed to do likewise.

The centre, however, called on the Federal Government to immediately articulate areas of counter-sanctions that would be deployed against the United States if it presses ahead with its threat.

It equally urged the FG to build and lead a “coalition of the righteous” made up of countries opposed to the degradation of human values through LGBTQI.

The group also warned that the EndSARS protests would be used to provoke security response that will then be leveraged on to launch another campaign in support of LGBTQI in Nigeria.

We have noted without surprise the Memorandum issued by United States President Joe Biden in which he threatened to sanction countries that refuse to condone the abhorrent flaunting of Lesbian, Gay, Bisexual, Transgender and Queer and Intersex (LGBTQI) people in the face of other law-abiding citizens of such countries.

Ordinarily, the rant of the US President should have been ignored, his predecessor having treated the world to endless rounds of tantrums and drama. But people of conscience across the world must rise as individuals and groups to highlight the folly of President Biden.

We are also encouraged to speak out because of the threat, while omnibus, appears to be targeting Nigeria. This is because we have the Same-Sex Marriage Prohibition Act 2013 that makes it criminal for people to openly engage in abhorrent practices that the United States is attempting to promote.

It is pertinent to point out here that have the Same-Sex Marriage Prohibition Act 2013 is not the imposition of just one random dictator, it was not signed into law by the present government but by its predecessor. It is legislation that had the touch of the three arms of government: the legislature passed the bill, the executive arm signed it into law while the judiciary has at one point or the other entertained suits about its legality.

The implication of what the United States is asking countries to do therefore is akin to asking that they disregard their democratic institutions, discard their national sovereignties and adopt dictates from the President of the United States of America. This is a clear threat to democracies across the world because it means whatever the representatives of these countries decide for their people will be of no consequences – it is a matter of time before elected persons begin to cite the US as the basis for which they will have no regard for their constituent.

There is also the fact that caving into President Biden’s demand would effectively mean that the whole time and efforts expended by Nigerians in making their views known on same-sex marriage issue would have been wasted.  Does it now mean that countries of the world should simply wait for the US to make laws and decisions for them? In which case, there would be no need for these nations to have presidents, parliaments and courts since President Biden has decided to take over their functions.

A lot has been said about the desirability of LGBTQI so we will not dissipate efforts in canvassing arguments against it. But suffice to say that the tendencies that Biden’s America is trying to make Nigeria adopt would not be tolerated among the breeding herds of American cattle since it will naturally lead to decline in the farms’ output, fall in revenue and eventual collapse of the animal husbandry sub-sector when male animals fail to mate with a female in the name of LGBTQI.

One point we want the Federal Government to impress on the United States is that nations of the earth have the responsibility to enforce the laws that govern them internally. If the US thinks laws should not be enforced, then it should have demonstrated this by allowing pro-Trump protesters take over its Capitol when they invaded the place in the challenge of the alleged election fraud that sacked former President Donald Trump from office. If the US can take measures, which it claims were meant to safeguard its democracy then Nigeria by the same take reserve the right to safeguard its culture.

We call on the Federal Government of Nigeria to immediately articulate areas of counter-sanctions that would be deployed against the United States if it presses ahead with its threat to use sanctions in forcing countries to accept the unacceptable. This should be backed up with ensuring that Nigeria’s next ambassador to the US is someone that can engage that country at the level at which it plays, an ambassador who can situate Nigeria t  relate with that country from a position of strength as an opposed to a nation that cowers at each episode of United States’ distemper.

Nigeria should equally build and lead a “coalition of the righteous” made up countries that are opposed to the degradation of human values as embodied in the pro- LGBTQI that Biden’s America has embarked upon.

We further urge that the government immediately begin a risk assessment regime to ensure that Nigeria can ward off any campaign of destabilization that could be launched against it under the innuendo of “full range of diplomatic tools”. Nigeria should not be caught napping especially when the US has run a similar operation against the country using the #EndSARS protests as a cover – we are all aware how bank accounts linked with the LGBTQI community were used to finance the protests and how LGBTQI members manned the social media propaganda and disinformation campaign that attempted to make the government look bad.

We want the government to note that Biden’s memo was not published in isolation. As a prelude to the memo, United States’ hirelings and urchins had activated the #Lekkitollgate hashtag as a replacement for #EndSARS protests, which they are planning to use as a means of provoking security response that will then be used as a launchpad for preventing enforcement of Same-Sexe Sex Marriage Prohibition Act 2013.