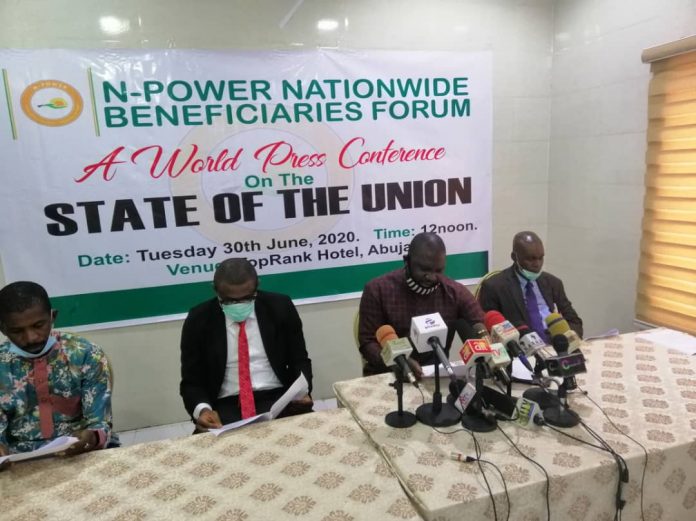 President Muhammadu Buhari and Minister of Humanitarian Affairs, Disaster Management and Social Development, Hajiya Sadiya Farouq, were bestowed with awards on Tuesday at the N-Power Annual Beneficiaries Awards following the successful commencement of N-Power Batch C and other social development schemes in the country.

The special recognition was championed by the N- Power Nationwide Beneficiaries Forum on behalf of over 500,000 other beneficiaries under the Batch A and B stream of 2016 and 2018 respectively.

While President Buhari was honoured as the ‘Masses President of Africa’, Hajiya Sadiya scooped the prestigious award of ‘Woman of the Masses’.

Speaking at a state of the union world press conference in Abuja on Tuesday, the group’s Secretary-General, Ambassador Ibekwe Goodluck said the pair are worthy of adulation for uplifting the living standard of the masses in Nigeria.

On its choice of the president, Ambassador Goodluck noted that the N-Power scheme will go down as one of this administration’s groundbreaking achievements and policies that has touched the lives of the ordinary citizens regardless of religion, ethnicity or gender.

On behalf of other beneficiaries, Mr Goolduck expressed gratitude to the president for the opportunity to benefit from Batch A and Batch B and equally the activation of a new phase for more Nigerian youths to benefit under batch C.

” After extensive consultations, the N-Power Nationwide Beneficiaries Forum consequently bestows on President Muhammadu Buhari the award of the MASSES PRESIDENT OF AFRICA, ” he said.

” It is indeed a gratifying and joyous moment for the N-Power Nationwide Beneficiaries Forum for the success of our programme which commenced in 2016 with thousands of beneficiaries across the critical industries targeted by the programme – agriculture, health, education, and tax under a 24-month programme.

“We wish to state that some of us have indeed benefited immensely from the programme in the 48 months. It’s indeed time to leave the scene with the skills and knowledge garnered for other Nigerian youths to benefit from the programme just like we did.

“We consequently appreciate the president and commander-in-chief of the Armed Forces of the Federal Republic of Nigeria, President Muhammadu Buhari for the opportunity given to them to benefit from Batch A and Batch B and equally the activation of a new phase for more Nigerian youths to benefit under batch C of the scheme.

” This is indeed a welcome development as it would avail more Nigerian youths the golden opportunity that the N-Power scheme presents in the critical stage of our existence. Our joy knows no bound, as well as our appreciation to a leader whose foresight gave birth to one of the best youth empowerment initiatives in Africa.

“It is also a statement of the fact that the N-Power scheme remains one of the best polices the Muhammadu Buhari administration in the sense it has indeed touched the lives of the ordinary citizens that dot the nook and cranny of Nigeria, regardless of religion, ethnicity or gender.”

According to them, her “sound foresight and leadership acumen would also see to the expansion of the N-Power scheme to include more areas that would be of more excellent benefits the generality of Nigerians” deserve commendation.

” We wish to state that that appointment of Hajia Sadiya Umar Farouq as the minister of humanitarian affairs, disaster management and social development could not have come at a better time than now given her pedigree and capacity for critical thinking at all times. It is also the perfect icing on the cake of Mr President’s talakawism (Government of the masses for the masses by the masses), ” Goodluck disclosed.

“The N-Power Nationwide Beneficiaries Forum wishes to reiterate that it would also avail its services to the Honorable minister in areas needed for the continued expansion of the N-Power scheme.”

However, the group urged President Buhari to introduce more programmes and initiatives just like N-Power.

” We wish to use this medium to encourage President Muhammadu Buhari to introduce more programmes and initiatives in the fold of the N-Power Scheme that would be of immense benefit to the generality of Nigerians across the country.”