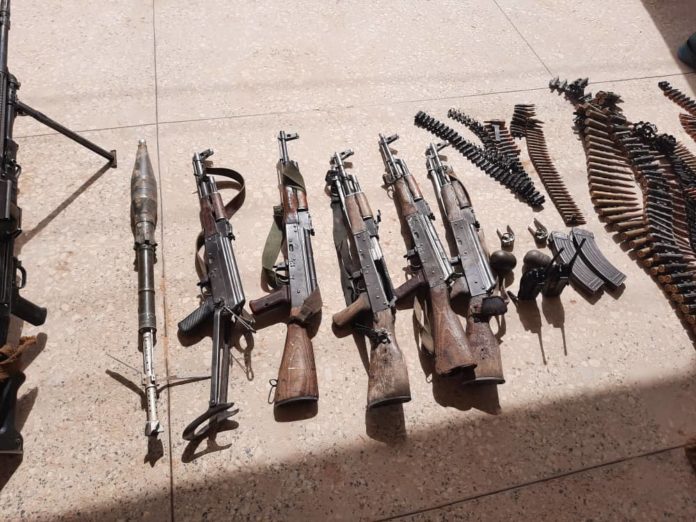 It has been gathered that troops of Sector 2 command of Operation Lafiya Dole have killed over 100 Boko Haram terrorists in Buni Gari, Gujba Local Government Area of Yobe State.

According to a top military source, the operation was carried out using the new operational strategy introduced by the Chief of Army Staff, Lieutenant General T.Y Buratai, who is now in charge of the activities of Theatre Command of Operation Lafiya Dole.

“The new operational policy of the Chief of Army Staff is yielding the desired results as the Boko Haram group have been enduring a hard time recently. We had credible Intel that a part of the group felt they needed to take their destinies into their hands, embarking on a headless journey outside the Timbuktu Triangle. Unfortunately, however, they met their waterloo,” our source said.

“I can tell you that the revised operational code of conduct has an emphasis on credible Intel and this is responsible for the feat recorded in Buni Gari. Our troops engaged the terrorist squarely and amid the battle, reinforcements were sent in on the orders of the Chief of Army Staff, who monitored the operations himself.”

It was also gathered that the move by the Boko Haram group was a decoy by Abubakar Shekau to take the attention away from himself and some of his top commanders that have been trapped in their hideouts for weeks.

“We got the Intel that there was a mass movement of terrorists along the Gombi-Baromari axis. But the movement didn’t align with the numbers trapped. What we did was to reinforce the Sector 2 command in Damaturu while the focus was still on the Timbuktu triangle. And this yielded positive results. We initially thought the number of casualties was not much. However, after a follow up exploitation operation, we realized the number of fatalities was over 100 and with several gun trucks destroyed and a large cache of arms and ammunition recovered”

Many locals and villagers who spoke to this medium were full of praises for the gallantry of the troops. According to a resident of Buni Gari, who spoke on the condition of anonymity, they noticed movements into their communities late in the night of Saturday. He stated that they knew it wasn’t soldiers because the movement was uncoordinated, and the whole community subsequently took cover.

“We have been in this crisis for long, and we, to a large extent, know the movement of soldiers because they are always coordinated. But on Saturday night, we sensed an unusual movement of vehicles coming towards our community. At some point, it halted. Not long after, we started hearing gunshots from the other flank and I can tell you that it was a very tough battle. “

The source further added that the gunshots lasted well into the early hours of the morning before it subsided.

“We came out from our hiding in the morning to see corpses of Boko Haram terrorist littered everywhere. Not long after, we saw soldiers who came to clear the place. We saw lots of weapons everywhere. We are grateful to the soldiers.”

Another resident of Buni Gari also stated that, but for the intervention of the soldiers, Buni Gari would have been consumed by the Boko Haram terrorist just like they did in Buni Yadi in 2014.

“The event of 2014 in Buni Yadi is still fresh in our minds. But we are very grateful to the Nigerian Army for saving us from the evil of Boko Haram. The soldiers displayed gallantry that led to the death of these Boko Haram terrorists.”

This medium was able to gather that the Chief of Army Staff was pleased with the operation in Buni Gari that he ordered a 24-hour surveillance around Yobe State to track fleeing Boko Haram terrorist that might have been fortunate to escape the Buni Gari onslaught.

A top source in the theatre command stated that “The Chief has instructed that surveillance operations are carried out within that sector to ensure that all feeling terrorists are tracked. As we speak, troops from Sector 3 are currently combing the area for remnants of Boko Haram terrorists that might have escaped and I can tell you that they would be apprehended.”

He added: “ The clearance operation is structured in such a way that these terrorist are boxed to a corner using a triangular format where the only option would be to surrender because it is no longer business as usual and no commander wants to incur the wrath of the Chief of Army Staff.

It would be recalled that the Chief of Army Staff recently relocated to Borno State to coordinate the operations of the Theatre Command in a new offensive against the Boko Haram terrorist group.