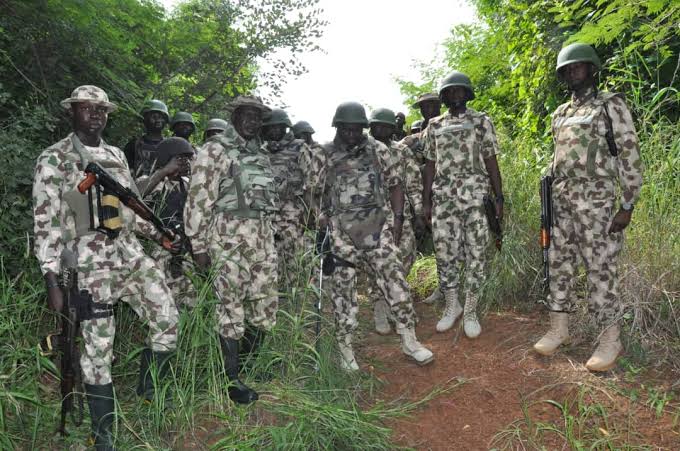 A group which claims it is dedicated to fact-checking security issues in Nigeria, Central Force Against Fakenews (CFAF) has dismissed reports alleging that 350 personnel are leaving the Nigerian Armed Forces.

According to CFAF’s President, Aminu Bisku, the group, with the aid of modern tools on information fact checks, has been able to establish that the report was sponsored by terrorist organisations operating in the Northeast to weaken Nigerian troops who in the last three months put them under intense heat.

CFAF added that the logic behind the information cannot even stand the slightest scrutiny as it does not appeal to common sense.

The report which was carried on an online medium claimed that 350 military personnel wanted to pull out from the force citing ‘loss of interest’ in the job as the major reason.

However, in reaction, Bisku rubbished the claim as a deliberate fabrication by terrorist organisations operating in the Northeast of Nigeria, to dampen the morale of fighting troops.

CFAF President said all the claims in the story can be punctured due to a number of reasons, chiefly among, he added is that 350 persons cannot all cite the same reason for leaving an organization.

“People leave organisations for different reasons people view developments differently, but it is almost impossible for hundreds of people to want to leave an organisation for the same reason,” he said.

Bisku said for such to happen then all the 350 personnel must have been put in a classroom and tutored how to write their retirement letters.

“This is is the only way 350 independent-minded persons can arrive at the same conclusion on an issue at the same time,” he stressed.

Secondly, the group added that the roundness in the figure does not conform to reality.

Bisku explained that propaganda pieces as they relate to claims in figures are easily punctured by the recourse to have an eye-catching sun, whereas real-life spontaneous reactions such as resignations hardly conform to any pattern that would comfortably fall in a round pattern.

His words, “Remember the 350 were not said to have been shortlisted for retirement but were said to have acted on their own, so it would have been difficult to arrive at a round figure as the one in the report.

“It would have been believable if they had said 218 or 341 or any such accidental figures but for a voluntary independent action to stop at a round figure of 350! you know that some people are trying to be mischievous. And because the sponsors of the story have a mindset, that was how they came up with a round figure of 350.”

CFAF also said it is not a coincidence that such propaganda would be released at exactly the same time when the insurgents are being killed in large numbers.

“The timing of the report should make you wonder. Why is it coming at a time when the insurgents are under heat?

“If our troops did not resign when they were going into tactical withdrawal and running to other countries, it would be stupid for anyone to believe that they would resign now that the heat is against the terrorists,” the group stated.

The CFAF further revealed that it is aware that in the last three months, the military killed nearly 2,000 insurgents in both the Northeast and Northwest regions and the Sevice Chiefs have been at the theatres of operation which represents the highest form of confidence-building to the troops.

“So for anybody to tell you that it is within such a time that our gallant personnel would be leaving is the highest form of deceit,” he added.

CFAF also said the much that has been worked out to improve the welfare of military personnel in the last four years has been the best so far, contemplating leaving service at such a time would be considered ill-advised

According to the CFAF president, within the last four years, the military acquired modern sophisticated weapons that made troops battle-ready and excited to go to the battlefield

The group says it is because of such motivation that last year, over a hundred thousand persons applied to join the army out of which 5,000 soldiers were recruited  to strengthen the fight against insecurity in the country.

Bisku said this year also, another round of recruitment exercise is going on where more youths would be recruited to beef up the number of fighting men.

“What is happening is that the insurgents have seen that they are losing the fight at the battlefield but want to use the media to send out damaging reports about the military so as to weaken the troops psychologically.

“But the military hierarchy which always steps ahead of these criminals is well aware of this scheme and is not in any way bothered about it.

“If anything, troops are now more confident to go on operations and route out these enemies of the Nigerian State and have even laughed at the idea that any  of them would be leaving at this time.”

The group, however, advised media platforms to always cross-check their facts before going to press with issues that have to do with the security of the nation so as not to play into the wrong hands.