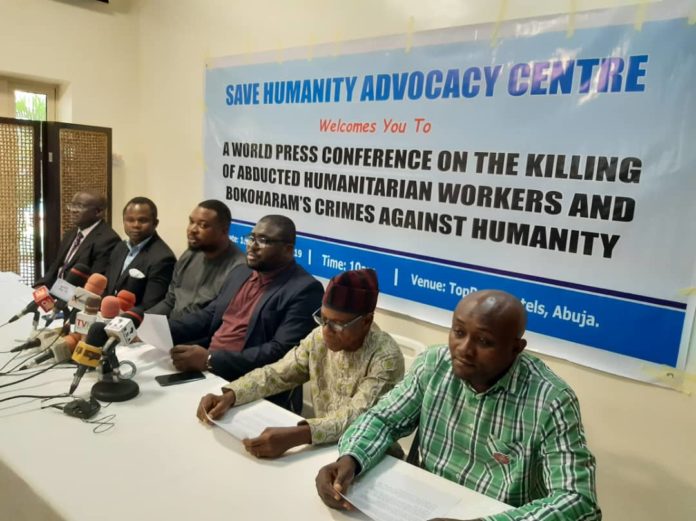 The Save Humanity Advocacy Centre (SHAC) has reacted to the recent killing of UN aid workers by members of the Boko Haram sect in Borno State.

The ISWAP faction of Boko Haram on Friday shared a gory video recording that detailed the execution of four out of the five abductees that remained in their captivity.

The four slain aid workers who were abducted on July 18 were staff of the Action Against Hunger (AAH).

The murder of the four aid workers has brought the number of the abducted humanitarian workers slain by Boko Haram to five this year.

Reacting to the sad development, SHAC said it is high time It is time for the world to sanctioned France, other terrorists’ promoters for crimes against humanity.

Addressing newsmen on Monday, Ibrahim Abubakar, Executive Director of the group called on the international community world to speak with one voice against those promoting terror in Nigeria and other parts of Africa.

The group also called on the Nigerian Military to scale up efforts to trace and free the fifth aid worker, Grace Taku, a female, whom the terrorists have reportedly consigned to a live of slavery.

His statement reads in full.

Gentlemen of the press, the world has again been made aware, through media reports, of Boko Haram killing of four staffers of Action Against Hunger (AAH), whom they have held captive since July 19, 2019 after they were abducted from their vehicles in the course of carrying out humanitarian work in the northeast of Nigeria.

The killing of the aid workers is condemnable, utterly uncalled for and deserving of the stiffest retribution possible from the Nigerian state and all nations on earth that truly call themselves Nigeria’s friend. Barbarism of this magnitude call for the shedding of diplomatic pretexts as it should be met with the kind of response that will remind the terrorists that humanity is not to be toyed with on the scale on which they have done.

We condemn this act of cowardice as a dastardly evil against humanity that should not have happened if the international interests propping up Boko Haram had taken the sensible step of discontinuing criminal support to the bloodthirsty monsters that they have created to torment innocent civilians.

It is of note that while Boko Haram and its Islamic State West Africa Province (ISWAP) iteration were taken successive heavy losses from the Nigerian Armed Forces, the reported escalation of French subversive activities in the region, including clandestine delivery of logistics to the terrorists, has given the terrorists the boldness to kill captives that they had held before France decided to strengthen their hands.

The blood of the four aid workers is therefore as much on the hands of Boko Haram/ISWAP as it is on the hands of the French government and that country’s nationals, who continue to aim for the comfortable life at the expense of human loss in the Lake Chad Basin. The world must rise up in unison against these terrorists and hold their French paymasters to account.

Time is running out for the world to speak with one voice against those promoting terror in Nigeria and other parts of Africa. If a bold statement is not made by the world at this time, then the whole of humanity would be put at risk because the twisted minds of these killers and their global sponsors have been perverted to a point where reason fail them. They must therefore be told in the clearest terms yet that enough is enough. The killing of the aid workers should be treated as a red line that has been crossed for which there must be repercussions.

As for NGOs and organizations that give covert support to Boko Haram, the murder of these aid workers is a wake-up call for them to retrace their steps because a group of terrorists that kill their colleagues do not deserve any form of support irrespective how morbidly such NGOs may detest the military.

In the meantime, we urge the Nigerian Military to scale up efforts to trace and free the fifth aid worker, Grace Taku, a female, whom the terrorists have reportedly consigned to a live of slavery. She remains the one ray of hope that the authorities will always go after those that threaten the wellbeing of citizens.

This briefing will not be completed without SHAC expressing its reservation about the manner in which news of the murder of these aid workers became public knowledge. The report emanated from the Twitter account of renowned Boko Haram propagandist, Ahmad Salkida, on whose hands the blood of the dead also flow. It can be argued that Boko Haram killed these people knowing that Salkida will do the dirty job of helping them publicize their heinous crime. We therefore hold Salkida equally responsible for this development as well.

Until the likes of Salkida are held to account for their role in the killings of innocent citizens of Nigeria, the rest of the world must accept that we have failed Nigeria and her citizens.