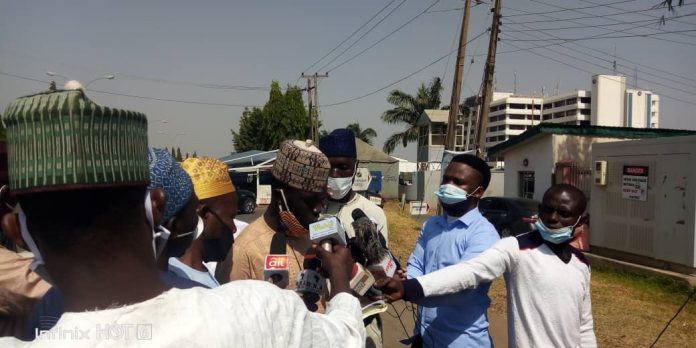 The Northern Patriot Assembly, NPA has submitted a petition to the Inspector General of Police, Mohammed Adamu  to demand an immediate investigation of APC Leader, Asiwaju Bola Tinubu over the lingering security breach in the South Western part of the country.

The group also wants the IGP to withdraw policemen attached to the Ondo State Governor so that the governor would not use them to enforce his unfortunate order to send the Fulani packing from the Southwest and to harass other innocent citizens.

The NPA delegation led to the force headquarters by its Director of Public Enlightenment,Ibrahim Lawal also urged the Inspector General of Police, to use his  good office to nip the impending crisis in the bud by arresting Tinubu, Igboho and others behind the current turmoil in the Southwest.

Some south west states have been in crisis following quit notice issued to Fulani herdsmen in the area.

The NPA while  commending  the reformation the IGP have brought to the Nigeria Police since he  assumed office said his style of administration and innovative tactics especially your handling of the EndSARS protests last year, has increased public confidence in the Nigeria Police and has made the country more peaceful and secured for citizens.

The group said,” Inspector General Sir, as you continue to seek ways of ensuring enduring peace and security in the country, we wish to bring to your notice the action of some subversive elements who are trying to disrupt the prevailing hard earned peace and security and are on the verge of letting loose commotion and strife on the country due to their selfish aims .

“We are pleased to inform you that we have monitored the activities of these people and ready to report to you that they not only do they not mean well for the country but are prepared to destroy every single gain we have made as nation since the amalgamation in 1914.

” Inspector General Sir, you must have observed that Ondo State under Governor Rotimi Akeredolu, has been one of the most peaceful states in the country with the least threats to peace and security.

“You must have been surprised therefore to see that of all the states in the Southwest, it is the Ondo governor who all of a sudden, would come out to issue ultimatum to members of a certain ethnic group in Nigeria, the Fulani, to quit some parts of his state.

“Apart from being a lawyer who should know the Constitution of Nigeria, Akeredolu is not known to have proclivities for sabre rattling and unnecessary attention seeking which emphasizes the curious twists in what is happening in the Southwest today.

” Sir, you must have also noticed that immediately after Akeredolu issued the ultimatum, that one rabble rouser, a certain Mr. Sunday Igboho, took a cue from there and issued his own ultimatum which he extended to all parts of Yorubaland”he said

Lawal added that as the nation was trying to come to task with this, the same Igboho quickly moved into Oyo State and forcefully tried to evict the leader of a Fulani community and some herdsmen living there which led to a clash resulting in the death of some persons.

He said, ” Inspector General Sir, as the fine police officer that you are, no one can school you on the security implication of these actions and the criminal tendencies they evince, but we believe it will be apt to say that these actions have crossed the threshold of normal law abiding citizenship bordering on crime and saboteur which  require drastic actions on the part of law enforcement agencies.

“While we do not lay claim to superior intelligence than the police, we rely on the encouragement given responsible citizens by the force to always report suspicious movements around, to intimate you about what we know on the recent threats to security in Southwest Nigeria.

“Sir, without fear of contradiction, we make bold to say that what is happening in the Southwest is mere politics which has the fingerprint of the self acclaimed leader of Southwest politics, Ahmed Bola Tinubu, all over it.

“Tinubu, as you know, is seriously lobbying to become the President of Nigeria by 2023.

“He claims he has invested so much in the Buhari/Osinbajo ticket that he should be compensated as the successor to Buhari, though it appears he may not have succeeded in convincing the leaders of the APC to hand over the ticket of the party to him especially with the declaration by Mamman Daura last year, that the presidency has not been zoned to any particular geopolitical zone in the country.

“This has made the politician to become restless and is desperately doing all within his powers to blackmail the presidency into kowtowing to his wishes and may have resorted to using the Ondo State governor, Rotimi Akeredolu and the Yoruba activist, Sunday Igboho and others to ignite tension in the Southwest.

“All these are carefully coordinated to heat up the polity and make the country ungovernable with the hope that after achieving this, he  will appear indispensable and be called to the negotiating table to state his terms.

“Sir, you will agree that this is a self serving and unpatriotic act that should be condemned as no country will allow its fate to to be tied to the political fortunes or otherwise of any politician let alone a person like Tinubu, who over the years, has been accused of so many acts of crimes against the Nigerian state.

“Only recently, one Dapo Apara, a Nigerian chartered accountant, has accused Tinubu and others of money laundering, fraud, tax evasion, and sundry corrupt practices.

“Last year, the former Lagos State Governor was also fingered as one of the sponsors of the EndSars protests which almost destroyed Nigeria.

“Many online media reported at the heat of the protests that Bola Tinubu was sponsoring the #EndSARS protests in the South Western part of the country in order to cripple the country and bring the administration of President Muhammadu Buhari to disrepute on the global front.

:Based on these antecedents, we have every reason to believe that Tinubu is behind the current turmoil in the Southwest and should be arrested and questioned about his role in the whole saga.

“This is considering the gravity of the offences in which many people have lost their lives and property worth billions of naira have been destroyed.

“These acts of incitement through proxies is equivalent to instigating domestic xenophobia to cause harm on a particular set of people.