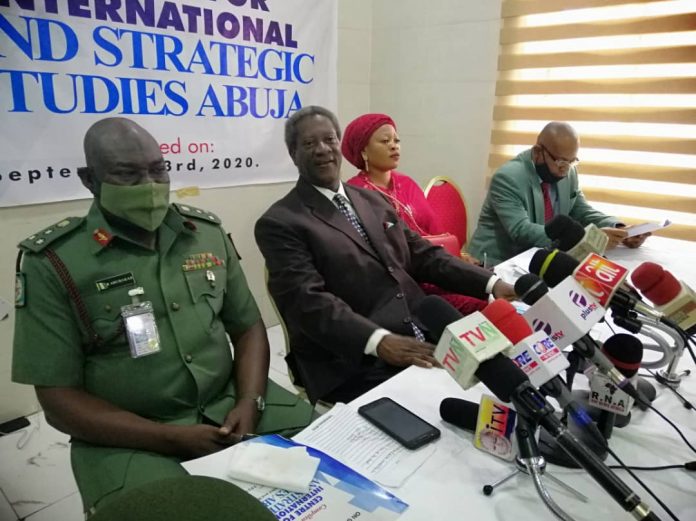 The Centre for International and Strategic Studies (CISS) has applauded Nigeria’s progress on peace as indicated by the Global Peace Index.

The centre also dismissed reports which ranked Nigeria as one of the most terrorised countries in the world.

Based on this year’s rating by the Institute for Economics and Peace, Nigeria climbed one spot to 147 ahead of some supposed peaceful nations like Russia, Ukraine and Turkey.

And according to CISS, this is a welcomed development that must be commended despite the barrage of challenges confronting the country.

The centre made this known in a report unveiled by its Programme Officer Dr. Jude Okunebo at Top Rank Hotel, Abuja on Wednesday.

Contrary to speculations, the centre said that Nigeria is not ranked third in the Global Terrorism Index, as this year’s ranking is yet to be released.

Okunebo disclosed that President Muhammadu Buhari’s uncompromising stance, commitment and dedication turned the table around for the country.

He also noted that the president’s emergence birthed an all-new approach that has rubbed off on the troops and their counter-terrorism operations.

“Nigeria, as a sovereign state, has witnessed several plethoras of challenges emanating from her internal political environment. The country has been under siege for some years mainly due to militancy, and the act of terrorism perpetrated by some individuals against the state. However, the most severe security challenges witnessed in Nigeria between 2001-2019 include; Niger Delta crises, kidnapping, armed banditry, cattle rustling, Boko Haram crises and the Farmers –Herders conflict,” the report said in part.

” The Nigerian Army has also been credited to have liberated communities in North-East Nigeria that were hitherto under the control of the Boko Haram insurgents. Five of the six northeastern states have been fully liberated, but for Borno State still experiencing pockets of Boko Haram activities, which have mainly been attributed to the lack of cooperation by the political authorities in the state with the Nigerian Military. The Nigerian Army has launched over 40 different operations and exercises in the last five years to contain various security challenges across the country”.

The CISS report, however, concluded that the current administration has lived up to expectations in ensuring that the issues of security take centre stage.

It disclosed that the involvement and commitment of the Nigerian Army in addressing the various security challenges cannot be overemphasized.

“Consequently, there has been relative peace and tranquillity in Nigeria, and this is against the insinuation in some quarters that Nigeria is amongst the most terrorized countries in the world.   It is indeed a statement of the fact there that cannot be the case in Nigeria with the commitment of the Muhammadu Buhari Administration towards the security of lives and properties,” the report noted.

“A careful look at the Global indexes for countries experiencing forms of conflict; Nigeria was not listed amongst the top five least peaceful countries and countries undergoing conflict. It this suffices to state that Nigeria has made substantial gains in the fight against terrorism and other forms of criminal activities and these campaigns can be adjudged successful and responsible for peace and tranquillity in Nigeria”.

In reaction, Brig.- Gen Abubakar from the National Defence College applauded the CISS for putting up a report that clarifies the issues of peace and security in Nigeria.

“I am indeed very glad that a very important centre of international repute dismissed the insinuations making the rounds by some individuals and groups both locally and internationally to paint Nigeria as the most terrorised and unpeaceful nations of the world,” he said.

Brig.- Gen Abubakar, however, assured that the troops are not resting on their oars.

He added, “They are not there sleeping but to ensure the peace and security of lives and properties of citizens. We have no doubt seen some achievements and changes between 2015 and now when General Buratai took over the mantle of leadership of the Nigerian Army as the Chief of Army Staff. This momentum, I believe we are able to sustain. – peace and security despite other challenges”.