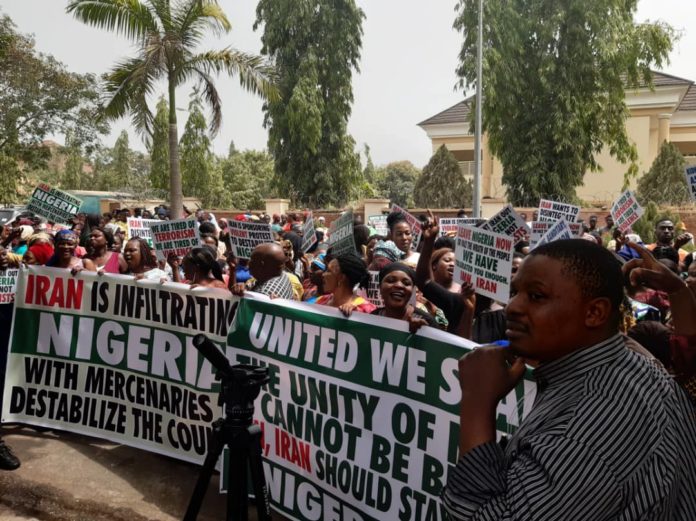 Some Nigerians on Monday, stormed the Freedom Park, Lagos to protest an alleged involvement of Iran and the Amnesty International in causing unrest in Nigeria.

The protesters, under the aegis of the Concerned Progressives, claimed the Government of Iran and Amnesty International were sponsoring violent groups and activities aimed at causing political, religious and economic unrest in the country.

Speaking on behalf of the protesters, Mrs Josephine Okpara called on Nigerians to wake up before it was ‘s too late.

She called on the appropriate agencies of government to deport all Iranians from the country, saying their continued stay in Nigeria is of no benefit to the nation.

Her speech: “Wake Up Lagos, Wake Up Nigeria, Wake Up Before It Is Too Late below,” read below.

We stand on all existing protocol and bring warm greetings from the Concerned Progressives, an organization committed to promoting the ideals of good governance and the unity and progress of Nigeria.

There is indeed fire on the mountain with the recent onslaught on the Nigerian nation by agents of darkness in our midst. These harbingers of death have vowed to see to the disintegration of Nigeria, and this much they have started implementing with the promotion of violent groups and the sponsorship of violence across the country.

As we know, this is not the first time some foreign countries have been conspiring against Nigeria. They have attempted it severally and have failed. But this time around, they have redoubled their efforts to see to the success of this campaign spearheaded wholly by the Government of Iran.

The authorities in Tehran smarting from their failures and revelations of their avid sponsorship of terrorism across the globe are attempting to spread their tentacles to the African continent by all means necessary.

The Iranian Government has vowed to be ruthless with Nigeria and this much their proxy in terrorism, the Islamic Movement in Nigeria has been implementing from time immemorial with their violent protests across the country, the assassination attempt on the Chief of Army Staff, as well as the spread of their extremist ideology in Northern Nigeria.

We wish to inform Nigerians that the Government of Iran has enlisted the support of Amnesty International (AI) the cash and carry human rights organization to lead a deadly propaganda campaign against Nigeria.

We are aware that Amnesty International was paid vast sums of monies for this campaign with the understanding that part of the funds would be channeled to the IMN and other deadly groups they have set up in parts of the country to cause mayhem of unimaginable proportion.

In light of the revealing circumstances, it is evident that Nigeria has to take its destiny into his hands to ensure that all Iranian interests in Nigeria leave the country in the interest of peace and tranquility.

We have tolerated their excesses in times past. However, this time around, we are saying enough is enough for their unwholesome meddling in our affairs as a sovereign nation, and this is the message we are passing in unequivocal terms.

This is indeed a battle for the soul of Nigeria because the drumbeats of war sound from wide and far all at the behest of the Government of Iran and their agents in Nigeria, the IMN, Amnesty International, and other newly established militant groups.

The Government of Iran should know that this time around, Nigerians would not sit and watch. Nigerians would speak out loud in one voice and one accord to see that their evil plots against Nigeria do not succeed.

In the coming days, we shall be raising awareness that would resonate in both national and international communities on how the Iranian Government is plotting for the disintegration of Nigeria by channeling millions of dollars to their proxies in Nigeria.

Our patience has been stretched beyond the limit, and never again shall we allow the proxies of the Government of Iran to destabilize our country. This must indeed stop forthwith as no amount of money in circulation would make their nefarious plot succeed.

Nigerians would unite against terrorism, and Amnesty International and their paymasters should look elsewhere for the implementation of their ungodly trade because Nigeria is not fit for their purpose.

The IMN leadership should be notified that Nigerians are aware of their establishment of militant groups under different nomenclatures on the instruction of the Government of Iran to wreak havoc on innocent citizens. We are also aware that their ultimate aim is to make these militant groups deadlier than the Boko Haram terrorist group.

Nigerians have indeed woken up from their slumber and is telling the Government of Iran to leave Nigeria in peace, for we are a peaceful and sovereign country dedicated to sustaining the ideals of democracy.

We refuse to be a part of a terrorist country whose only desire is to see people die and perish. That would not be allowed to happen in Nigeria because Nigeria belongs to Nigerian and not Iranians.

We are consequently using this medium to call on all well-meaning Nigerians as well as the international community to prevail on Iran to quietly leave Nigeria with their bags of blood monies to somewhere else. We do not need them and would never need them.

They should take their blood monies to other places to seek war as Nigerians seek peace and tranquility. This is indeed a statement of fact the Government of Iran must respect in their interest.

Our charge to the international community is simple. Iran must leave Nigeria for their continued stay in Nigeria is of no benefit as we know their mission is to spread terrorism and destabilize the country.

Enough is enough, and the time for Iran to leave Nigeria is now. This message should not be ignored because it is indeed the wishes of the over 180 million Nigerians. The international community must be informed that Nigerians have run out of patience, and our demand must be respected.