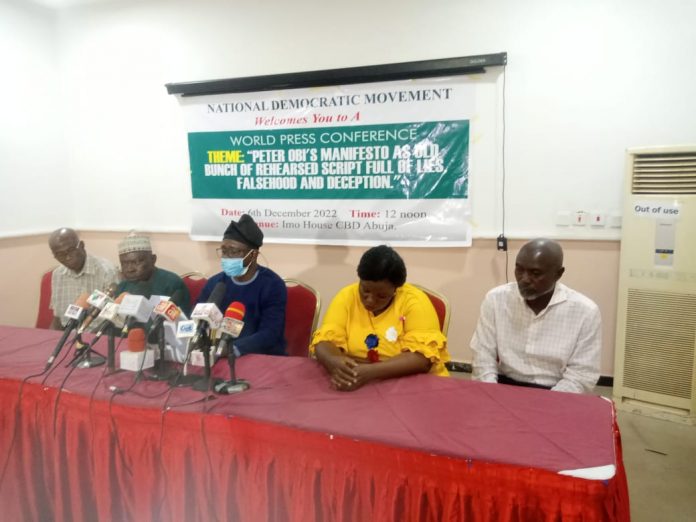 The National Democratic Movement (NDM) has described the manifesto of the presidential candidate of the Labour Party, Peter Obi, as an old bunch of rehearsed script full of lies, falsehood, and deception which have become the trademark of the former governor.

The group which made this known at a press conference on Tuesday in Abuja noted that the manifesto is riddled with falsehood and error aimed to sway the support of Nigerians.

Speaking on behalf of the group, James Audu, however, advised every patriotic Nigerians to fight for justice and integrity.

He said: “We must not be swayed by political deceit in electing an incompetent person to head this nation. We need a man that can change reality, and not only give statistics.”

In his words: “Firstly, it can be seen that the title of the manifesto leaves so much to be desired in repulsion. In the title of the manifesto is the emphasis on PO (Peter Obi – POssible) which speaks to the only “ME” mindset of Peter Obi. This is an egoistic man that put himself first before any other person. Always wanting to be at the forefront of the eulogy of every little achievement made.

“We are not surprised at the eventualities from the camp of Mr. Obi. What else do we expect from a man that boldly claimed he has no manifesto, pointing out not having a structure to lead Nigeria with? A man that is ready to lead a nation on the edge of a “Que sera sera” pillar, leading to confusion and destruction of a great historical nation.

“This is nothing but a primitive mindset of “ME”. This “ME”, that “ME”. To Obi, the presidency is all about him. The Same “ME” couldn’t change anything in Anambra. The same “ME” that was disgraceful caught in the web of Pandora papers’ revelations, which has left many mouths across the world agape, and till today many of the mouths are still widely left open. The same “ME” that kept pronouncing he would take Nigeria from a consuming to a Producing Nation, But with no manifesto?

“We believe the few wise ones in his caucus later discovered the foolery in leading a nation without a written manifesto. Peter Obi had to be reminded before doing the needful. A man gunning for the presidency had to be reminded about the most basic thing in seeking an elective position, presenting your manifesto (I.e, your action plan if you get elected). Those who have overtime dressed him in the bogus toga of the most qualified Candidate would be licking their wounds now having seen that Peter is less qualified going by his shameful dealings and speech.

“The National Democratic Movement keenly warns the public to beware of many wolves in sheep’s clothing. Who openly express themselves as political orators of great change, but have no evidence to support their many claims of numerous acclaimed achievements used in masquerading their magnanimous woes and shortcomings. They are filled with shameful acts of secret investments, secret accounts, illicit funds ownership, and/or tax evasion.

“Here has Mr. Obi placed before every one of us, a manifesto which is an old bunch of rehearsed script full of lies, falsehood, and deception which have become the trademark of Peter Obi himself.
When he speaks, he attempts to make himself a God, he sounds and an image more like someone who has achieved a great fit and has done so much already. But a critical review will tell better that Obi is nothing but a singing canary who says so much but do less.

“We, therefore implore patriotic Nigerians to begin interrogating the competence of the Presidential candidates as they unveil their manifesto and share their views on key national and global issues.

“We ask every patriotic citizen, will the funds come from the chains of tax heavens where the looted treasury would be stored, or would the reformation come from different parastatals that being headed by every member of his nuclear and extended family?

“This is a man that has no right to speak on zero tolerance of corruption because if such mandate was fully seen through, the Pandora revelation should have landed him in prison, and cooling off for a long time without even giving it a thought running for the least political position. His actions against the Nigeria code of conduct should have reprimanded him in jail by now, and we are pleading with Mr. President to carefully look into that aspect also.
If elected President, at the end of Obi’s 8 years as President he would have invested all our resources for us in places where only Pandora papers can unravel.

“The National Democratic Movement is imploring every patriotic Nigerian to fight for justice and integrity. We must not be swayed by political deceit in electing an incompetent person to head this nation. We need a man that can change reality, and not only give statistics. We need a selfless and patriotic person that is not after self-aggrandizement. We want that man that puts Nigeria, and Nigerians first before himself. Peter Obi is a virus that would corrupt a functional system, he has cancer in Nigeria’s tissue, and he is all about himself. “