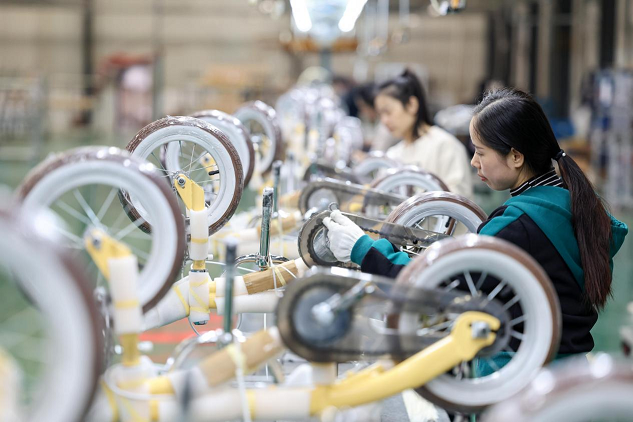 China’s foreign trade has shown strong resilience and vitality this year. In particular, cross-border e-commerce, with its advantages in online transactions, contactless delivery and short transaction chains, has become key to stabilizing foreign trade and promoting consumption.
Recently, China’s State Council approved the establishment of comprehensive pilot zones for cross-border e-commerce in another 33 cities and regions across the country.
It marks the seventh batch of comprehensive pilot zones for cross-border e-commerce set up in China, as well as the second time the country approves the establishment of such pilot zones this year.
This move has brought the tally to 165, covering 31 provincial-level regions across the country.
Today, these pilot zones have become an ecosystem and carrier for the development of cross-border e-commerce featuring synergetic innovation in institutions, management and services.
They have set up information sharing, financial service, smart logistics, credit, statistical monitoring and risk prevention systems, as well as a policy framework centering around the online platform of single window services and brick-and-mortar industrial parks.
Besides, nearly 70 measures of mature experiences and innovative practices have been promoted nationwide.
Hangzhou, east China’s Zhejiang province is home to China’s first comprehensive pilot zone for cross-border e-commerce. Over the past seven years, the city has nurtured 49,000 cross-border e-commerce sellers, who registered over 2,000 trademarks overseas and reported a total export value of 100 billion yuan ($14.24 billion).
In east China’s Jiangsu province, the average annual growth of the cross-border e-commerce scale reaches more than four times in the past three years, and over 90 industrial parks and incubators have been established. Besides, relevant enterprises in the province have built some 280 overseas warehouses in major markets along the Belt and Road. The prospering cross-border e-commerce sector has injected new impetus into stabilizing Jiangsu’s foreign trade amid COVID-19.
Driven by the pilot zones, China’s cross-border e-commerce enjoyed rapid development. According to statistics released by Chinese customs, the scale of cross-border e-commerce surged nearly tenfold in the past five years. It accounted for 4.9 percent of China’s total foreign trade last year, up from less than 1 percent in 2015.
In 2021, the import and export scale of cross-border e-commerce reached 1.92 trillion yuan, up 18.6 percent year-on-year, marking a consecutive high growth after it made a 25.7 percent stride in 2020.
In the first six months of this year, the import and export transaction volume of the cross-border e-commerce grew 28.6 percent year-on-year to maintain steady and rapid growth.
A batch of small- and medium-sized foreign trade enterprises are embracing the international market thanks to relevant policies rolled out by local governments.
Chinese coffee machine maker HiBREW, turning from original equipment manufacturer to original brand manufacturer, is gaining a reputation in more and more foreign countries; a smart rangefinder made by Chinese tool producer HOTO reported an annual turnover of 4.17 million yuan($600,000); fishing gear producer SeaKnight based in Hangzhou has sold its products to more than 200 countries and regions; WEWATCH, a Chinese tech company specialized in LED projectors, saw its export value reaching 40 million yuan($575,515) from zero in just a year.
Sheng Qiuping, China’s vice minister of commerce, said cross-border e-commerce has significantly lowered the threshold of international trade and involves large numbers of micro- and small-sized entities. So far, over 30,000 enterprises have registered on the online integrated service platform of the comprehensive pilot zones for cross-border e-commerce, according to him.
Logistics is a key factor in the efficiency and stability of cross-border e-commerce services. Over the recent years, new logistics models have kept emerging, such as overseas warehouses, return center warehouses and high-quality goods warehouses for export. They have become comprehensive service complexes that offer warehousing, logistics, customs clearance, return and exchange, processing and repairing, as well as packaging and distribution services.
According to statistics released by the China’s Ministry of Commerce, the coungtry has built over 2,000 overseas warehouses that cover a total area of 16 million square meters.
Sheng Chaoxun, director of the strategic policy office of the Academy of Macroeconomic Research affiliated with China’s National Development and Reform Commission, told People’s Daily that China’s cross-border e-commerce is in an important development period for innovation. Relevant policies and measures need to be further improved to make overseas warehouses an important pillar for the development of the sector, Sheng explained.