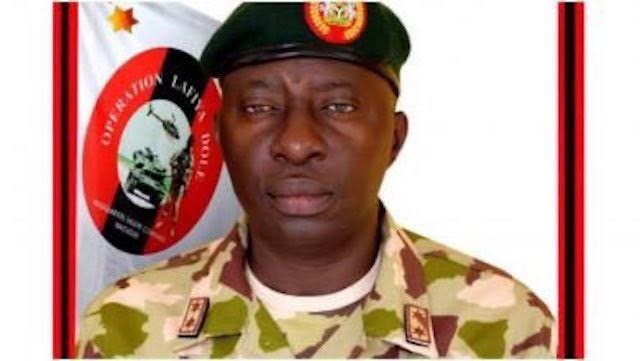 Some Southwest leaders, under the aegis of Yoruba Summit Group (YSG), have been accused of instigating mutiny and campaign of calumny against the Nigerian Army over claims bothering on ex-Theatre Commander of Operation Lafiya Dole, Major General Olusegun Adeniyi.

According to People’s Forum, a group of Nigerians, the assertion that Major Gen. Adeniyi has been court marshalled is “despicable and an affront to our sensibilities as a people”.

In a statement signed by its Director of Strategy and Communication, Dr. Ifure Ataifure, on Monday, the People’s Forum said the motive is designed to “score cheap political points” ahead of the next elections.

The People’s Forum, however, warned that an impending mutiny could be on the cards in the Army should the Yoruba Summit Group carry on its campaign.

It further alerted members of the general public to hold the Yoruba Summit Group responsible if there is uprising in any part of the country against the constituted authorities.

The recent statement by the Yoruba Summit group, a conglomeration of leaders of socio-political organizations in South West Nigeria indicating that the former Theatre Commander of Operation Lafiya Dole, Major General Olusegun Adeniyi has been court marshalled by the Nigerian Army authorities is despicable and an affront to our sensibilities as a people.

We wish to state the reference and usage of Yoruba Nation in their treatise is an indication that the gathering under the Yoruba Summit group was designed to score cheap political points rather than face the facts.

Unfortunately, these groups of individuals have failed to let us know that the principal reason for their gathering was the fine-tuning of political permutations for the 2023 general elections. One of such permutations is to begin the ethnic persecution campaign against the Nigerian Army.

In their assertion that “We the Yorùbá condemn in strong terms, the cherry-picking of our fighters, soldiers, officers as either cannon fodders easy-targets, operational fall-guys and being used for experimental disciplinary measures, while the real culprits, go free!” is most uncharitable and an indication that there is more than meets the eyes.

This is aside the fact that the immediate past Commandant of the Nigerian Defense Academy and a Major General was also from the South West region, as well as others too numerous to mention across the Armed Forces of the Federal Republic of Nigeria.  It consequently holds that the ethnic categorization by the Yoruba Summit Group is borne out of ignorance and to score cheap political points.

It is also a puerile thought for the supposed big wigs at the meeting to advance causes that would further disunite the country; instead, they elected to be petty all in the bid to give a dog a bad name to hang it. They cannot claim to be in the knowledge of the rules and regulations for members of the Armed Forces with regards to punishment and rewards.

We consequently wish to state that it is outside the purview of the Yoruba Summit Group to delve into purely military matters. By their actions, they have indicated that they are calling for mutiny in the Nigerian Armed Forces to truncate our nascent democracy.

This fact is corroborated in their statement “We the Yorùbá Nation, therefore, reject the holding of a future general election before Restructuring Nigeria fiscally and structurally. We consequently wish to inform the members of the general public that in the event of a coup against our democracy, the Yoruba Summit Group should be held responsible.

The People’s Forum also wishes to inform members of the general public that should there be an uprising in any part of the country against the constituted authorities in the country; the Yoruba Summit Group should be held responsible through its statement “The emerging resolve of the Yoruba not to be part of the vassal state that Nigeria has become, is better managed with due accommodation before any further degeneration and obvious consequences.

Our quest shall henceforth be to mobilize the masses of our peoples not to participate in any further elections until the goal of Restructuring or Self-determination is attained.”