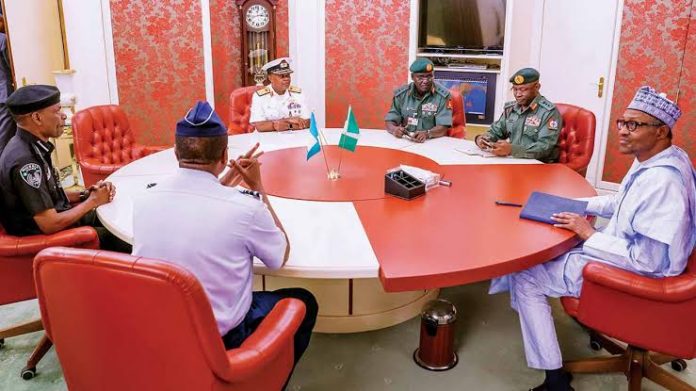 …. say some Nigerians are making conclusions without proper analysis of security issues facing the country

Nigerians in Diaspora Monitoring Group (NDMG) United States Chapter have passed a vote of confidence on President Muhammadu Buhari and his Service Chiefs for their handling of the insecurity situaton in the county.

According to the group, the Nigerian military has effectively managed the security breaches confronting the nation, thwarting the intent of detractors.

In a statement signed by its President, Cosmos Collins, on Wednesday, NDMG said it drew this conclusion after extensively reviewing the prevailing security situation in the country.

According to the group, the recent charge by President Buhari has spurred the military heads to perform even better than they had done since the inception of his administration. .

Hence, NDMG faulted those jumping into conclusion without proper analysis of the security situation in the country, adding that the call for theService Chiefs’ dismissal is merely a propaganda.

While warning against seeking strange foreign solutions, the group, however, recommended that Nigerians channel energy into leadership, stability and proper financing for the military.

The Nigerians in Diaspora Monitoring Group, United States Chapter, has extensively reviewed the prevailing security situation in Nigeria and has come to the conclusion to pass a vote of confidence in President Muhammadu Buhari and Military Service Chiefs for the manner in which they are handling the insecurity challenge in the country.

We particularly commend President Buhari for the recent push that he gave the security chiefs because we see this as his way of jolting them to perform even better than they had done since the inception of his administration.  A leader can only pressure his lieutenants with such intensity when he is confident in their ability to deliver.

In our view, these military leaders remain the best in the sub-region as they have been able to largely contain an internationally-backed terrorists’ insurgency. Inspite of the near absence of advanced technological equipment like drones to fight t, the military has been able to do so much under President Buhari and the Service Chiefs.

What we discovered in the course of reviewing the situation is that Mr President and the Service Chiefs are constantly evaluated by organizations and individuals who do not factor in all the fundamentals driving insecurity in Nigeria.

For instance, there is a penchant to disregard the ignoble roles being played by countries whose activities directly or indirectly support Boko Haram to wage its war against Nigeria.

There is also the failure to acknowledge the international failure in leadership that should have been provided by the United Nations, which as a global body should have taken steps to cut off international support for Boko Haram by censuring countries and organizations that are sponsoring the terrorists. The expectation is that the United Nations would have by now midwife an international coalition to mop up the remnants of Boko Haram that have scattered into the territories of Nigeria’s neighbours as they flee the effective military operation launched against them.

We are equally mindful that the rank of terrorists was swelled up recently by the influx of fighters from other parts of the world into the Lake Chad Basin.

This large-scale migration of terrorists to the region has been responsible for the criminal elements that attempt some daring attacks after it became obvious that the long stay of Gen TY Buratai, the Chief of Army Staff in the theatre of operation resulted in the killing of over 1, 700 terrorists in less than two months.

A natural consequence of this development is the resort to pro-Boko Haram propaganda that manifest as frantic demands for President Buhari to fire the very security chiefs that have consistently helped Nigeria to ward off the terrorist activities of the group. Our expert advised that the intent of this campaign is in three folds. The first is to boost Boko Haram morale, the second is to demoralize government troops and to incite the populace against the military leadership and government.

The Nigerians in Diaspora Monitoring Group, United States Chapter, therefore, urge Nigerians must remain confident in their military leaders, men and women who have shown uncommon zeal and dexterity in handling the insecurity situation in the country. With the benefit of information at our disposal, we came to the logical conclusion to pass a vote of confidence on President Buhari and the military leaders because they have effectively managed the security breaches in the country and thwarting the intent of Nigeria’s detractors.

We warn those seeking strange foreign solutions to be reminded that many countries having the same problems have not achieved a tenth of what President Buhari and these Service Chiefs have achieved. We rather recommend that Nigerians think about leadership
and stability and proper financing for the military to enable the armed forces to consolidate on the gains made so far.