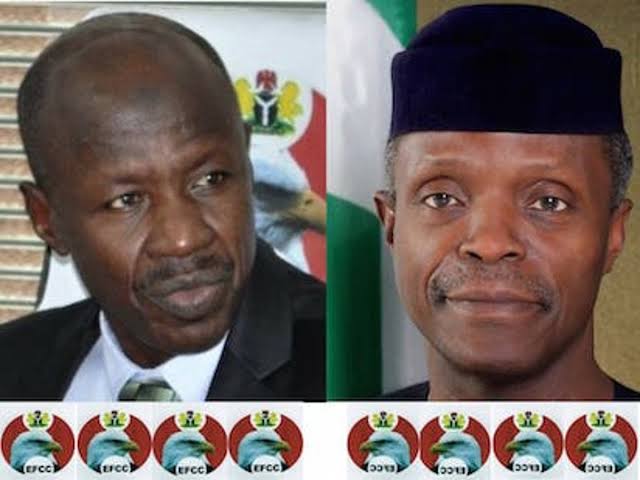 The Peoples Democratic Party (PDP) has called for immediate resignation of Vice President Yemi Osinbajo following alleged complicities and his indictment in the fraud investigation of Mr. Ibrahim Magu, the embattled Chairman of Economic and Financial Crimes Commission (EFCC).
Dr. Emeka Kalu, the National Publicity Secretary of PDP Youth Alliance (PDPYA) canvassed this position in a statement to journalists.
According to him, Magu who is presently suspended allegedly confessed that he gave N4 billion to Osinbajo out of the N39 billion proceed of recovery.

Kalu stated that this indicated that President Muhammadu Buhari’s administration had only been paying lip services to the much taunted corruption fight.
“What we’ve had so far is a case of using power to take away from opposition only to be looted by the people that think they have the right to our collective wealth with impunity and reckless abandon.

“PDP had continued to shout and expose this national rape while many see it as crying wolf because we’re in the opposition, now time and realities of unfolding events have vindicated us and lay bare to the hypocrisy and deep rooted wickedness of the men who have been presiding over our ruin as a nation for over half a decade.

“The honourable thing no to do now is for the Vice President to resign to give room for proper investigation as his continued occupation of the VP position will sway the investigation in his favour” he said.

Embattled former acting Chairman of the Economic and Financial Crimes Commission, EFCC, allegedly embezzled over N39billion and gave Vice President Yemi Osinabjo N4billion, after the VP gave instructions to him to release some of the recovered loots, Sources within the panel investigating the former EFCC boss told Pointblanknews.com

This is even as investigators discovered that as early as 4 am on Tuesday, EFCC staff members suspected to by “Magu Boys” invaded the headquarters of the anti-graft agency and made away with files and computers containing important information.
According to the source who does not want to be named, Magu sold recovered properties, vehicles, houses.

Specifically, 167 recovered trucks missing from its Port Harcourt office, could not be accounted for. 27 of those trucks recovered, were sold this year.
The source told Pointblanknews.com that Magu admitted that he flagrantly defied the Act setting up the EFCC which stipulates he reports to the supervisory ministry which is the Ministry of Justice and Office of the Attorney General of the Federation.

According to the source, Magu consistently ignored requests of assistance to investigate and recover about N67billion by sister agencies including the office of the Inspector General of Police and the Presidency.

The source hinted that Magu could not account for missing N37billion as indicated in the submitted report of the presidential asset recovery panel headed by the chairman of the FIRS.

Specifically, Magu was said to have mentioned a N4billion that he released to the VP based on directives the very day the president left the country for the United Kingdom on medical treatment.

Pointblanknews.com gathered that Magu was headstrong on Monday when he was picked up. Investigators said he refused to speak on any issue they asked. On Tuesday, when they showed him documents and evidence, he started confessing. He is now begging for a soft landing, an investigator said.