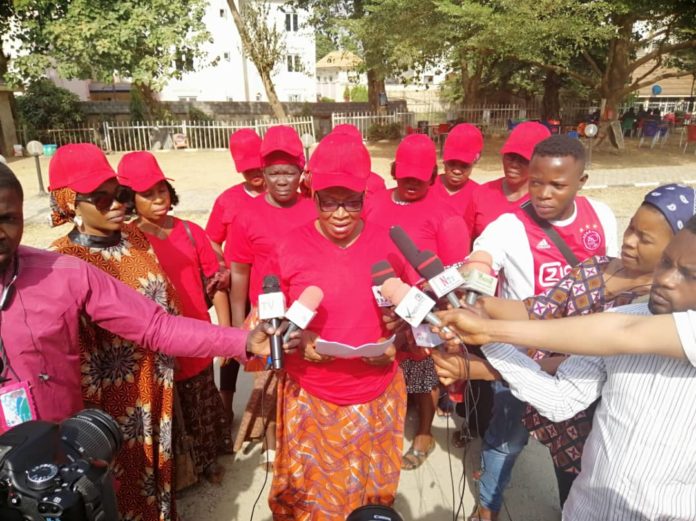 The Centre for Africa Liberation and Socio-Economic Rights (CALSER) has challenged elders, leaders and political stakeholders in Borno State to adopt new approach and strategy to defeat terrorists’ ideology.

In an emotion laden speech delivered at the Unity Fountain on Friday, the centre says it will take collaboration of the elders, politicians and other stakeholders in condemning the antics of Boko Haram/ISWAP ideology for peace to return to the north east.

CALSER’s convener, Princess Ajibola, in an open letter to Northeast elders, stakeholders and politicians, called on these leaders to help build the region and defeat terrorists’ ideology.

According to Converner, Princess Ajibola, the northeast must realise that “we are our own enemies” and the “time has come for us to get out of this shell that has tied our hands and tongues”.

CALSER, therefore, called on elders, political leaders and other stakeholders to join hands with the government and the armed forces to extend the maximum level of support needed to succeed in the fight against insurgency and for Nigeria to defeat the Boko Haram/ISWAP ideology.

The Centre reckoned that this can only be achieved if a more pragmatic approach towards defeating terrorist ideology is adopted.

Our respectable elders, esteemed stakeholders and political leaders in North-east Nigeria, this is an appeal for us to stand up and take our destiny in our hands. The time has come for us to sit and reason together concerning what has been happening in our country, particularly the North-east region.

We cannot afford to pretend that all is still well when our well-being as a people has been violated and the future for us and our children threatened. The overall essence of our humanity is being threatened by evil, wickedness and foreign conspiracies against our country.

We can no longer pretend that all is well with us, when we are being attacked on a daily basis by evil minded men, when our sources of livelihood are being destroyed, the social order we once enjoyed is being eroded, our people are being killed and the very foundation of our existence shattered. Life losing its true meaning and our core values being overtaken by a new posture of malice, envy and jealousy.

In the past 10 years and more, our situation has become one of the most pathetic and unfortunate conditions any group of humans have been subjected to live with on the globe. We have been through the worst forms of human experiences, forced on a daily basis to pass through the most devastating circumstances known to man. This includes suffering by innocent children who have committed no crime against us but simply being born Nigerians at this point in time.

We have experienced and are experiencing bombs, land mines and other forms of devices that do havoc to both our physical forms and psyche that the sound of any of these no longer mean anything to us. We have seen lives cut short in the most brutal manner, limbs chopped off and other horrors that are better not mentioned.

We have seen innocent people butchered that the red colour of blood does not evoke blood-curdling emotions any more. We have seen children orphaned in seconds and women widowed in their thousands in the twinkle of an eye that such sights no longer evoke sombreness as it used to.

We can say without fear of contradiction that our situation is worse that than those of nations at war.
Those who under the throes of war are enabled to idèntify the casus belli and thereby work towards a plan of action to bring an end to the crisis and make for reconciliation to avoid treading similar paths in future.

But in our case, we are daily confronted with despair and despondency owing to the fact that while war has been declared on us, we cannot say what the reasons are for the belligerence neither can we descry its duration.

The fact is that we are not even sure who the enemy is as the more we try to point accusing fingers the more the fingers keep curving towards us. We are told that the terrorists want to conquer and bring the nation down, but who are the insurgents if not our blood brothers, uncles,.sons and other relations.

We looked the other way because we thought they were aggrieved and that perhaps their anger would last only for a little while.
We were wrong as there was no anger in the first place and the evil that is driving them seems to have no end.

We thought that if we stop the onslaught on them and talked to them in a tongue they understand, that they would drop their guns and come home. But our pleas on their behalf seems to further aggravate the situation.

Our silence has crept in on us and we have now realised that we are our own enemies. Our children are being recruited and trained to turn their guns and bombs on us and we remain silent.

Our daughters and sisters are forcefully taken captives, defiled and humiliated and we look in bewilderment, our lands are being desecrated with blood and we say nothing, our people are being killed and we look the other way.

The North east used to be the home of peace and example of perfect social and economic order that people from other parts of the country and indeed West Africa send their children to come and acquire Islamic education on our shores.

From Bauchi to Gombe to Borno to Yobe, Adamawa and Taraba are vast fertile lands for agriculture, mining and tourism that others not so privileged come to share in our God-given assets.

It is not a coincidence that some of the most beautiful landscapes in the country with captivating allure are found in this region.
For example the Yankari Game Reserve, the Lake Alau, the Gwoza hills and the Mambilla Plateau are all here.

The strategic importance of the zone to the rest of the country are captured in the numerous dams and river basins we have across the zone.

But all these cannot on their own yield the economic potential to the country and humanity unless we the people put efforts to harness them.

And these cannot be harnessed in an atmosphere of bringandage, brouhaha, chaos, cataclysmic social liquidation and war.

By the time we realise the effect of these years wasted in chaos and social interruptions, it may be too late.

We therefore appeal to our elders, political leaders and other stakeholders to join hands with the government and the armed forces of the Federal Republic of Nigeria to extend to them the maximum level of support needed to succeed in the fight against insurgency and for Nigeria to defeat the Boko Haram/ISWAP ideology.

This we can achieve by evolving a more pragmatic approach towards defeating the Boko Haram/ISWAP ideology that is targeted at breaking Nigeria into pieces.

Cooperating with the Federal Government will send negative signal to the terrorists that it is not business as usual and will put them out of business. Our unequivocal condemnation of the terrorists and their evil habits will send a signal to them that we are now united and want to see the final end of terrorism.

Lasting peace will come if only the elders and stakeholders are passionately involved and work hand in hand with the Federal Government to see that the wounds begin to heal.

Perhaps the insurgents have mistaken our lukewarmness to mean we either condone what they are doing or that we are too scared to talk to them. No one should be too precious to live when the lives of our children and women are not guaranteed.

We must condemn with every ounce these barbaric and dastardly acts and talk to the insurgents to desist from the path they have chosen that normalcy should return to the North east as we all would be the better for it if the force of evil is overthrown.

The time for us to speak against the evil is NOW and not tomorrow. We must defeat the Boko Haram/ISWAP ideology before it breaks us into pieces.

Thank you and God bless you.