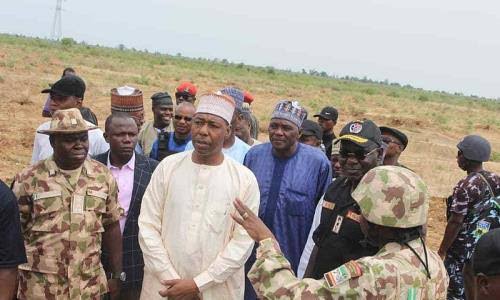 The North-East Peace Assembly (N-EPA) has urged Borno State Governor, Babagana Zulum and the Nigerian Military to remain focused in its fight against terrorism in the state.

The group’s plea is in response to Friday’s attack by the Islamic State West Africa Province (ISWAP), which resulted in the death of some  persons including soldiers, policemen and members of the Civilian JTF.

According to the North-East Peace Assembly, the latest attack is a growing desperation of the terrorists and their supporters to reclaim relevance when they no longer have any.

“We commiserate with the Borno state government, the Military, Police, Civilian JTF and families of the deceased and pray that those that continue to fuel terrorism in parts of the north-east will one day account for their crimes,” National President, Musa Babangida, said in a statement on Saturday.

“We condemn the attack in the strongest terms, it is despicable, repulsive and is a confirmation that none of the terrorists is deserving of any sympathy by any segment of the Nigerian state or within the international community. This attack should attract the harshest response possible from the forces fighting the terrorists.

“Security experts had postulated that newly defected terrorists from Abubakar Shekau’s Jamā’at Ahl as-Sunnah lid-Da’wah wa’l-Jihād faction would try to impress the ISWAP faction they recently joined by carrying out extreme attacks. But it is pertinent not to ascribe any undue capabilities to the bloodthirsty terrorists behind Friday’s attack since that is what they crave.

“Considering that the governor was on an inspection tour of Baga area when his convoy was attacked, it is apparent that the terrorists want to create the impression that people cannot return to their homes even when the military has successfully ejected them from these areas”.

“Analysis of the attack has confirmed the growing desperation of the terrorists and their supporters to reclaim relevance where they no longer have any. The use of landmines and lone wolf attacks in parts of northern Borno just targeted at creating unnecessary noise by the terrorists in efforts to show that they are still active whereas in real sense they have been fully defeated”.

The group, however, urged the military and the Borno state government to handle the aftermath of the attack in a manner that does not give Boko Haram/ISWAP propagandists and cyber agents the opportunity to exploit it for terrorists’ media manipulation.

It said, “There are already ongoing efforts by terrorists’ propagandists to give dubious slants to the attack on the Governor’s convoy in order to strain relations between the Borno State chief executive and the military. This must not be allowed to happen.

“The military should repeat the clearance operation it carried out the day before the attack on the convoy during which it successfully neutralized several top Boko Haram/ISWAP terrorists’ commanders like Abu Usman, Alhaji Shettima, Modu Mainok, Bukar Gana, Abu Summayya, Amir Taam and Amir Kuraish, among others. It should invade and totally lay waste to the islets on Lake Chad from where the terrorists are staging their last stand.

“The Borno State government should on its part sustain its pressure on willing terrorists to surrender to be rehabilitated and reintegrated into the society. Governor Zulum should lead the state’s stakeholders to get the terrorists and their commanders to surrender before it is too late for them.

“We urge the people of the state to support the military and the state government to succeed. Displaced persons should not be discouraged by this attack since part of the intention of the terrorists is to create the impression that people cannot return to their homestead to resume a life of normalcy. The true defeat of terrorism in the north-east will be achieved when the people are able to send a strong message to these killers that they can never win against the Nigerian state”.