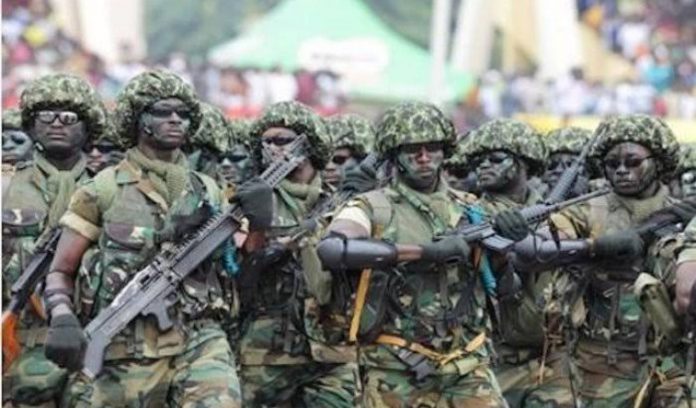 The Oduduwa Integrity Foundation (OIF) has welcomed the launch of the operation ‘Crocodile Smile’ by the Nigerian Army, describing it as “timely” at a period the corporate existence of Nigeria is under threat

With the #EndSARS protests taking a violent twist after reportedly being hijacked by individuals and groups against the interest of the nation, the Oduduwa group said the operation will counter all such emerging threats.

The army announced on Friday that its annual exercise will commence on Tuesday to identify, track and “counter negative propaganda” in the social media and across the cyberspace.

The operation, which is the first ever cyber warfare exercise to be conducted in the history of the African Armed Forces, will also include identification component aimed at identifying Boko Haram terrorists fleeing from their base.

National President, Kunle Salau, speaking at a press conference on Sunday in Lagos said it is pleased that the exercise will be conducted nationwide unlike in the past when it was limited to certain geo-political zones.

He, however, challenged the troops to fish out the cyber arm of Boko Haram, IPOB and their collaborators who take to social media space to spread falsehood.

The Oduduwa Integrity Foundation further called on the army to track virtual payments and financing of questionable activities to destabilize Nigeria as well as the recent trend of hacking of government websites.

While calling for maximum support from Nigerians, the OIF urged troops to resist the provocation that they will naturally come across in the course of this exercise.

Read the full speech below:

Gentlemen of the press, you would have learnt that the Nigerian Army has commenced Exercise Crocodile Smile VI, which will take place across the country beginning this month till December 31 of this year. We invited you here today to make our stance on the exercise known to Nigerians so that they can properly respond to the exercise.

The exercise is timely as it is coming at a time when the corporate existence of Nigeria is under intense attack by enemies of the country with the latest being the #EndSARS protests that have now been taken over by persons that are known to have in the past attempted to use mob action to undermine the incumbent government. When taken against the background of certain developments that were first flagged before the 2019 General Elections, it becomes apparent that a lot has to be done and achieved by the exercise.

Since the last exercise, Nigeria now faces the risk of the diverse terrorist groups collaborating and they are reportedly wooing the hardcore persons among the protestors to make their acts of terrorism metropolitan. The Boko Haram terrorists fleeing a punishing war in the northeast could also sneak to other parts of the country to form cells in their bid to unleash a nightmare scenario on the country.  The exercise is equally a chance for the Army to take on the bandits, killer herdsmen and kidnappers that have been tormenting certain parts of the country.

These potential gains from the exercise make us appreciative of the Army and this is in addition to other good things we see in it. First, we are pleased that the exercise is being conducted nationwide unlike in the past when it was limited to certain geo-political zones with peculiar security appraisals. It is our firm belief that experience from the previous editions of the exercise will be brought to bear in executing Exercise Crocodile Smile VI. The other parts of the country will benefit from the exercise like other states have in the past.

Secondly, we are joyous that the Army is including a cyber component that will track terrorists to their most recent hideout, which is online. We are confident in the cyber capabilities of the Army and its proficiency in deploying the same to counter emerging threats to Nigeria’s existence while also equipping itself for a future that is increasingly becoming digital. In this, we have specific demands to the Nigerian Army:

Several groups had in the past raised alarm about the activities of the cyber wing of Boko Haram/ISWAP terrorists who hide behind the unanimity of the cyberspace to promote terrorist propaganda. Exercise Crocodile Smile VI should decisively smoke out these persons and by implication cut off the cyber and propaganda support that has remained pivotal to Boko Haram’s ability to rebound each time it is dealt with.

The terrorist group, Indigenous People of Biafra (IPOB) cyber unit should be disbanded in the course of this round of Exercise Crocodile Smile VI. The strength of many terrorist organizations and their criminal collaborators has been the taunting statement frequently issued by nebulous personalities, which we know to be a pseudo name or nom de guerre. The cyber component of the exercise should be able to unmask those that have been stoking dissension and hatred against the Nigerian state.

We have also seen an explosion in virtual payments and financing of questionable activities to destabilize Nigeria. As seen with the #EndSARS protesters who are being financed by multiple interests that are out to destroy Nigeria, Bitcoin and other virtual currencies are being used to fund the protests and also to pay for terrorists’ activities in the northeast. Other countries have robust policies for dealing with cryptocurrencies and we believe Exercise Crocodile Smile VI should trigger the momentum to evolve a policy to this effect. But as a stop-gap measure, the Nigerian Army should use the cyber component of the exercise to mitigate the damage being done to Nigeria by the use of cryptocurrencies, which are well-documented catalysts for crimes perpetrated from the dark web. They are a new threat to nations.

The Army should use the exercise to address the recent threats against Nigeria’s digital assets like the hacking of websites belonging to MDAs as part of the #EndSARS protest. While global hacktivist group, Anonymous has claimed responsibility, we believe that the instructions to hack these digital assets are from Nigeria here and the digital footprints that tie the hackers to those who issued the instruction would help unmask those responsible for them.

We further realize that another thing that is different from when the Army held past editions of the exercise is the presence of the COVID-19 Pandemic.  We expect that the Army will not suspend its medical outreach on account of the pandemic.  Rather, people need medical assistance now more than ever. The exercise should therefore not omit the well-cherished medical component from the exercise.

Meanwhile, we appeal to the Nigerian Army to impress on its troop the need to resist the provocation that they will naturally come across on this exercise.  We state this from past instances of IPOB mounting propaganda against the Army and even having its fighters physically confronting soldiers for them to have multimedia documentation of supposed harsh handling of their situation by the military. The ongoing #EndSARS protests and its anticipated mutations in the weeks ahead will similarly provoke troops in other for them to accuse the government of the day of repression. The Army must avoid falling for this booby trap.

We call on all Nigerians particularly those in the south-west geo-political zone to support the Nigerian Army in the maintenance of internal security in the country. Nigerians must be wary and prepare for the expected negative criticism of the exercise by those who are afraid that the Army would end their reign of terror when the exercise is successfully conducted.