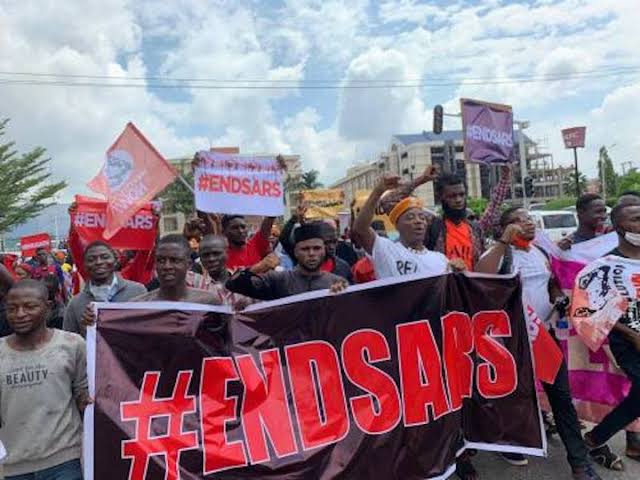 The Coalition for Democracy, CD, has urged EndSARS protesters in Nigeria, to focus on the theme of their campaign of reforming the Nigeria Police in order not to allow subversive elements hijack the protest.

President of the Coalition, Comrade Samson Atawodi, who spoke with newsmen in Abuja, said since President Muhammadu Buhari has signed into law the Nigeria Police Bill, 2020, this is the right time for citizens to push for the implementation of the reforms which formed the original theme of the #EndSARS protests.

It would be recalled that President Buhari had in a memo dated September 16, 2020, communicated his assent to the Bill to the National Assembly, which repeals the Police Act Cap. P19. Laws of the Federation, 2004, and provides for a more effective and well organized Police Force in Nigeria.

Comrade Atawodi said with the establishment of an appropriate funding framework for the Police in line with what is obtainable in other Federal Government key institutions, the new Act will enhance professionalism in the Force through increased training opportunities as well as create an enduring cooperation and partnership between the Police Force and communities in maintaining peace and combating crimes nationwide.

He said as President Buhari has taken prompt action and disbanded the SARS unit of the Police as demanded by the protesters and agreed to implement suggestions on improving the police, it would be unfair for the youths to continue to be on the streets.

“The Presidential Panel on Police Reform has agreed to the five-point demand of protesters which includes halting use of force against protesters, unconditional release of arrested citizens; justice for the victims of police brutality, payment of compensation, and the psychological evaluation of policemen as well as  increasing their salaries.

“By agreeing to do these, the Federal Government has shown that it is a listening government and is prepared to listen to suggestions that would make lives better for Nigerians,” he said.

The Coalition President said added to that, the Inspector-General of Police (IG), Mr. Mohammed Adamu has gone ahead to set up a new outfit to replace the notorious SARS while the Governor of Lagos State, Mr. Babajide Sanwo-Olu has also set up N200 million fund to assist victims of police brutality.

Comrade Atawodi however noted that despite the dissolution of SARS and FG’s concession to implement these reforms, that the protests have continued noting that this could be hijacked by opposition politicians and other subversive elements to cause hardship on fellow citizens .

He insisted that continuing with the protests when the cardinal point for staging it has been met would not only portray the protesters as having ulterior motives but would enable miscreants and other subversive elements mislead them into hidden, selfish and dangerous motive that will impact negatively on the nations democracy.

He said the youths should be wary that not everyone that identifies with them is doing so with a clear motive as there are people who have been looking for opportunities to hurt the current administration for either defeating them at elections or blocking channels which they corruptly enrich themselves.

He said Nigeria’s democracy came at a cost and the youths must be careful not to fall to the antics of mischief makers to throw it away.

“Nigeria has gone far with its journey into democracy and it is not at this time that we should give room to people who for selfish reasons want to turn back the hands of time to achieve their selfish aims.

“While we make demands of the government, we should be wary of naysayers and be focused on what we want so that our intentions remain clear,” he said.

The Coalition President reminded the protesters that no administration has impacted on the youths the way President Buhari has done in the last five years.

He said it was President Buhari who increased the allowances of NYSC members by a hundred percent after several past administrations had failed to do so.

He said the current administration also introduced social interventions programmes like N-power Scheme that put unemployed youths on allowances until they were able to start businesses of their own.

Comrade Atawodi said the current increase in the salary of teachers is also a demonstration of the current government’s belief in bettering the lot of the youths adding that though the SARS police unit has been quiet unprofessional in their dealings with the citizenry, that should however not allow the youths  open the door to lawlessness or allow agents of destabilization plunge the nation into chaos and anarchy.

He said this year alone, president Buhari had given the go ahead for the Nigerian Army and Airforce to employ 5,000 Nigerian youths, the NDLEA 15,000 youths and is empowering at least one person per the 774 local governments in the country

He described such measures as steps  that would help the youths in the long run and advised that it is better to support the government to conclude the process of reaching majority of the yours with better jobs and opportunities rather than lose it on the alter of populism.

“Some of these things take time to mature, but as far as I know the benefits are gradually trickling in and very soon, we shall be the better for it,” he stated.