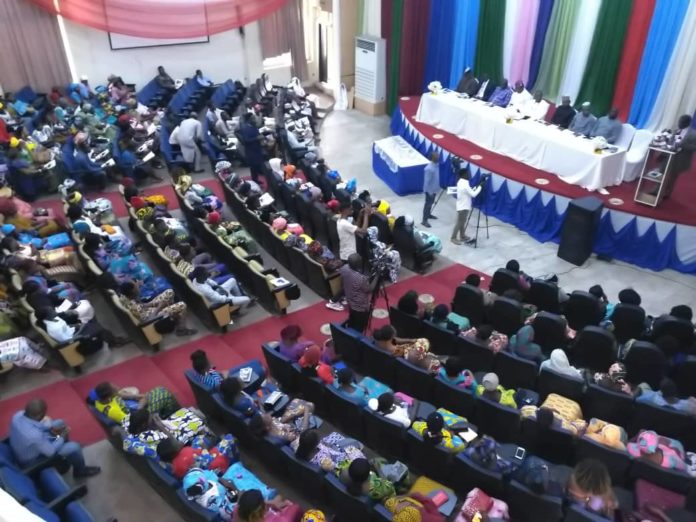 A book which seeks to substantiate the alleged evils of Ibrahim El-Zakzakky and his shittes movement, the Islamic Movement of Nigeria as a terrorists has been unveiled in Abuja.

Speaking at the occasion, Chancellor of Centre for International and Strategic Studies CISS Prof Ahmed Danfulani noted that the mission and vision of IMN has not been officially stated however, El-Zakzaky has severally made statements that mirrors the missions, goals and intentions of the group.

“Their mission as an extremist organisation has also been captured in their official websites etc. What is known about their mission and vision could be seen when a careful study of their confessions and professions is embarked upon.

“Their sole mission which is to establish an Islamic state has been politically resisted by the government and other religious groups, however the IMN have also engaged in violent acts that could be regarded as terrorism.

“It should be noted that just like how Boko Haram started, the activities of IMN is taking to the same pattern and process.

“The Mission and vision of IMN show their disregard for the Nigerian state and deliberate intensions to overthrow the Nigerian government through violent means” he added.

The governor of Benue state, Samuel Ortom who was distinguished guest of Honour at the event described the author, Terrence Kuanum as an astute young man who has survived many battles most of which were in the interest of the peaceful coexistence of Nigeria.

Represented by his Senior Special Assistant on Liaison, Hon Baba Acka, Governor Ortom called on Nigerians to unite with a view to fighting the common enemy of the Nation.

In his remarks, the author of the book, Mr Terrence Kuanum emphasized that the project became necessary because some international actors have begun taking advantage of the security situation in Nigeria Which has made it difficult for citizens to coexist together as Nigerians.

He lamented the number of lives lost across the nation because of non-state actors who have continued to set the narratives to destabilise the nation through violent agitations for their own selfish interest.

“At a point our sovereignty was questioned because someone else was setting the narratives for us” he noted.

He called on Nigerians to have confidence in the nation and trust our institutions while countering the narratives aimed at destroying the stability if the nation.

Other personalities who graced the occasion include, Professor Ahmed Danfulani, former speaker of the Benue State House of Assembly Hon Terkimbi Ikyange, Hon Nick Eworo and a host of others.

Honourable Eugene Aliegba, former Commissioner for Education and lecturer was the Chairman of the occasion.