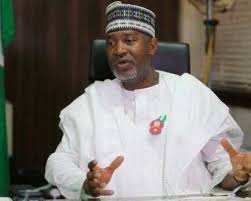 Minister of Aviation, Sen. Hadi Sirika has inaugurated an inter-ministerial committee, charged with the responsibility of reviewing the impact of seasonal rainfall prediction (SRP) by the Nigerian Meteorological Agency (NIMET) on the nation’s food security from 2015-2018.

According to the minister, “the prediction which is very scientific and exact, are extremely important and beneficial to what we do, like how to plan cities and build in such a way that stands the weather condition, but the most important one is our ability to feed our self by knowing when to plant and harvest the type of crops at what particulars season”.

He said it is in recognition of the importance of the annual rainfall predictions that the Agency is being empowered and positioned for more accuracy.

“We are acquiring capability through NIMET to cascade and drop it down within meters and inches of accuracy, noting that in 2017 some farmers in Sokoto came to testify that from the prediction and the advice they have gotten that they were able to make good harvest for the season and unfortunately other who didn’t follow the advice had losses”.

The committee’s Terms of Reference include:
a)     Examining the level of awareness of stakeholders (especially farmers) of the SRP;
b)     Compare and contrast the agricultural production and SRP within the period of 2015-2018;
c)     Examining the consumption vis a vis production of agricultural products on the nation’s economy within the period. Relating  issues on SRP and food security
d)     Other assignments given by the Minister on the subject matter.
He urged the committee members to take the job very seriously as national assignment and do it with all the necessary due diligence as well as finish on time, considering its likely effect on the nation’s food sufficiency capacities.

Chairman of the committee and Director Planning Research and Statistics Mohammed Shehu pledged that the members will work assiduously and deliver as expected. He thanked the minister for the opportunity to serve for the committee whose assignment, according to him touches the life of the average Nigerian.