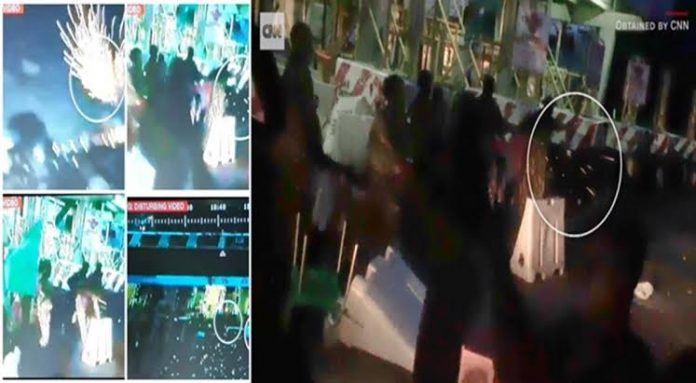 The Association of Nigerian Professionals in Europe (ANPE) has knocked Cable News Network (CNN) over its report on the Lekki shooting, describing it as an organised falsehood against Nigeria.

In a communique released at the end of an emergency general meeting, ANPE said it discovered that CNN’s report was not only misleading but riddled with no fewer than nine errors.

The ANPE said it came to this conclusion after analysing the report as well as the testimonies of stakeholders at the ongoing Lagos State Judicial Panel of Inquiry and Restitution.

Among others, in the communique signed by President, Dr Agwu Onyeke alongside 13 others and made available to newsmen on Sunday,  ANPE said the CNN’s report was hurriedly put in place and relied on information that was gleaned from the social media space.

The group, however, advised the American news channel to desist from acts and actions that would set the country on fire.

The Association of Nigerian Professionals in Europe is the umbrella body of Nigerians from all walks of life that have distinguished themselves in their chosen fields of endeavour in different countries in Europe. The association has over the years made significant contributions to the overall wellbeing of Nigeria through policy interventions in critical sectors of the Nigerian economy. This much has been highlighted in press conferences, seminars and policy papers that have been impactful in the developmental agenda of Nigeria.

The Association of Nigerian Professionals in Europe in fulfilment of its mandate of contributing to the socio-economic development of Nigeria reviewed the events in Nigeria with regards to the EndSars protests that rocked the country as well as the recent report by the Cable News Network at an emergency general meeting to put issues in proper perspectives.

The Association of Nigerian Professionals in Europe convoked an online extraordinary general meeting with all members in attendance from countries in Europe. Members were divided into subcommittees on a country by country basis to review the report by the CNN and consequently mandated to give independent reviews to have a balanced judgment.

Members reviewed the report by the CNN on the EndSars protests as well as the testimonies of other stakeholders at the ongoing Lagos State Judicial Panel of Inquiry and Restitution. Members thoroughly screened videos and images under various conditions to elicit an objective assessment of the issues at hand with regards to the factors responsible for the escalation of violence during the EndSars protests in Lagos state and other parts of the country.

Members were also mandated to ensure a balanced assessment of issues devoid of ethnic and religious sentiments in fulfilment of the overarching objective of putting issues in proper perspectives.

Members of the various sub-committees were tasked to make presentations on their findings at the plenary which was coordinated by the secretariat of the Association of Nigerian Professionals in Europe.

All the presentations by the sub-committees were subjected to multi-layers of scrutiny to ensure that findings would stand the test of time and the actual position of the involvement of the Nigerian Army at the EndSARS protests.  Consequently, the following were identified:

That the report by the CNN was hurriedly put in place and lacked every form of objectivity as what was posited was already in the public domain.

That the CNN relied on information that was gleaned from the social media space without recourse to subjecting such information to scrutiny before going public.

That the CNN report on the EndSARS protest is indeed malicious and betrayed good conscience, fairness and accountability to the public good.

That the CNN erred substantially by relying on interviews from a segment of the population that might have been compromised by some interest in what transpired at the Lekki Tollgate incident.

That the CNN joined the fray when issues have been adequately addressed by the Lagos State Judicial Panel of inquiry and Restitution.

That the CNN report negates every form of objectivity and intended to give a dog a bad name to hang it.

That the videos and images used in the illustration by the CNN were not from competent sources but rather from what has been in circulation in Nigeria over several weeks.

That the CNN attempted to change the narrative to downplay the efforts of the Nigerian Army in the restoration of law and order after the city police got overwhelmed.

That the CNN did not conduct due diligence on its sources of information as well as the credibility of some of the actors interviewed in light of the era of fake news.

The Association of Nigerian Professionals in Europe as a result of the above concludes that the report by the CNN does not reflect the actual position of things with regards to the involvement of the Nigerian Army in the EndSARS protest.

It also failed to explore all necessary avenues in concluding that soldiers used live bullets at the Lekki Tollgate. It merely relied on conjectures and anecdotes that suit the narrative of its editors rather than address the issues at hand.

It is thus our considered opinion that the CNN report is an aggregation of outright insinuations and illogical conclusions.

The Association of Nigerian Professionals in Europe herby make the following recommendations: That the CNN must retract its news story on the EndSARS protest in Nigeria for lacking in objectivity and meant to further heat the polity rather than address the issues on the ground with regards to the involvement of the Nigerian Army in the EndSARS protest.

The CNN must be advised to desist from acts and actions that would set the country on fire.

That the CNN should moving forward subject its analysis to several layers of scrutiny before making the same available to the general public.

The Association of Nigerian professionals in Europe wishes to use this medium to call on the promoters of the CNN to desist from acts that would set Nigeria on fire. It must also be circumspect in its analysis on issues it has limited knowledge on.