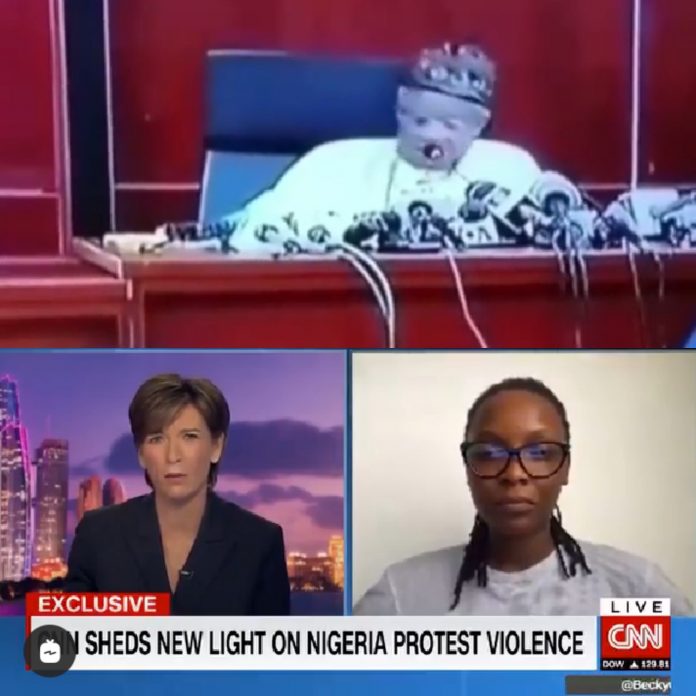 The March4Nigeria movement has urged Nigerians and the international community to disregard CNN’s report on the Lekki shooting in Lagos, noting that it is targeted at demonising the Nigerian military.

The group said after a careful scrutiny of the report, it concluded that CNN has joined campaign of calumny against the Nigerian government as well as the military.

Speaking at a press conference in Abuja, Director of Publicity, Deborah Ndace said CNN was irresponsible with its report, following an already existing narrative that was in the public domain.

The March4Nigeria movement, however, demanded an unreserved apology from the American news channel to the federal government, the Nigerian Army as well as the Nigerian people.

While calling on Nigerians to ignore CNN, the group urged the international community to question its credibility as an organisation for engaging in acts that are divisive and promote violence.

You are all welcome to this press conference meant to put issues in proper perspectives with regards to the recently released report by the Cable News Network (CNN) with regards to the involvement of the Nigerian Army in the EndSARS protest at the Lekki Tollgate in Lagos Nigeria.

We wish to state that after careful scrutiny of the report, it was identified that it was indeed an attempt to demonize the Nigerian Army whose only offence was standing on the side of democracy by averting what was clearly a coup attempt at our nascent democracy.

The CNN in its report was tactically evasive in addressing the issues, but instead, it elected to tow the dishonorable path of making wild goose allegations against the Nigerian Army without the necessary facts to back their claims.

The March4Nigeria is not only alarmed that an organization that has built a reputation of responsible journalism over decades would throw caution into the wind in furtherance of the agenda of a select few at the detriment of millions of people that rely on it for news reportage across the globe.

The focus of the CNN on Nigeria is not a coincidence, but rather a well-orchestrated plot by some very powerful interest hell-bent on truncating the democratic experience in Nigeria and to give international credence to their nefarious plot, the likes of the CNN was coopted to lead this campaign of calumny against the government of Nigeria, as well as the Nigerian Military.

This is nothing short of irresponsible journalism that can only be perpetuated by a leading proponent of Fake News in the United States of America attempting to expand its antics to the African continent.

It was expected that CNN would stay true to the tenets of journalism by undertaking a thorough investigation. Instead, it relied on an already existing narrative that has already been in the public domain and gotten stale.

It is also despicable that a news medium such as the CNN would put out such half-truths with the ultimate aim of escalating issues that have received the required response from the government and other critical stakeholders in the country.

In the light of the above, the March4Nigeria is stating in unequivocal terms that the report by the CNN is indeed malicious and a great disservice to the journalism profession in all ramifications.

We also wish to remind the proprietors of the CNN that Nigeria is not by any stretch of the imagination the United States of America where it has consistently attacked the administration of President Donald Trump.

The importance of the CNN tendering an unreserved apology is to correct the wrong its report has had on the psyche of members of the unsuspecting general public in Nigeria and outside the shores of Nigeria.

We are also using this medium to call on the international community to question the credibility of the CNN as an organization for engaging in acts that are divisive and promote violence as exemplified in its report on the EndSARS protest in Nigeria.

Nigerians must also be aware that the CNN is indeed acting the script of some vested interest that have been targeting our nascent democracy without success. Nigerians must, as a matter of necessity, come in one accord to condemn the CNN report in its totality.

The implication of allowing the CNN to get away with this treatise on Nigeria is that more ferocious attacks would be launched against our democracy and critical institutions such as the Nigerian Army, which would be our greatest undoing.

The exigency of time requires all hands to be on the deck in the interest of peace and sustainable development.  We must not sit and watch while the likes of the CNN demonize and rubbish the efforts of the government and the Nigerian Army in the restoration of law and order in Nigeria.