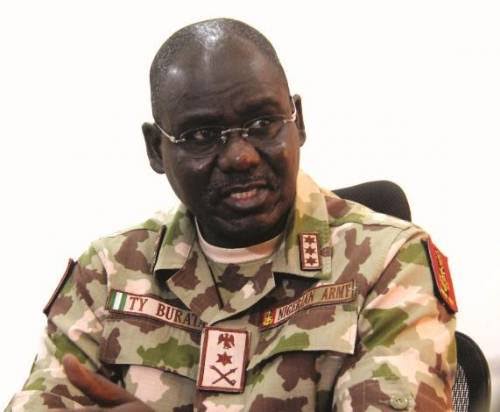 “For them to perceive the advantage of defeating the enemy, they must also have their rewards.” – Sun Tzu

A great leader motivates and inspires his followers. He continuously craves for excellence and erects favorable templates or incentives to compel and induce hard work. Rewards are the oyster of performance in any workplace. And leaders conscious of success imbibe the policy of reward for hard work, dedication and exceptional performance as bait for outstanding productivity.

Nigeria’s Chief of Army Staff ( COAS) and emperor of the anti-insurgency operations in Nigeria, Lt. Gen. Tukur Yusufu Buratai is a perfect leader in this sense. Though, it is the natural and constitutional duty of the Army to fight wars, but he knows soldiers need to be emboldened to go the proverbial extra-mile in battles.

The job of a soldier is quite a difficult one. A soldier in the battlefield is perpetually under the threats of death or life deformities. He is the bulwark of nations and citizens against deadly enemies in peace or war times.

Gen. William T. Sherman of the American Army captures the dreariness of war in these scary words; “It is only those who have neither fired a shot nor heard the shrieks and groans of the wounded who cry aloud for blood, more vengeance, more desolation. War is hell.”

War is really hellish, but the life of a soldier is confined to it. Besides the era of the unfortunate Nigerian civil war of 1967-70, Gen. Buratai is presiding over the Nigerian Army in the country’s second most difficult phase in history. The age of ravaging Boko Haram insurgency is certainly not a storm in a tea cup. Terrorism has proven to be an obstinate malignant turmoil on souls of nations and successive leaders of Nigeria.

But President Buhari has made the difference. Under Gen. Buratai as the helmsman of the counter-insurgency operations, Nigerian troops have performed exceedingly commendable. The Army boss has vanished the spirit of spinelessness, soldiers’ feminine retreats from the frontlines and the remonstrative balking of troops before enemy forces in tales of mutiny at the battlefield.

Joyfully, the years of gloom, hesitance and frustrations to battle insurgents by Nigerian troops have eclipsed. Gen. Buratai has reactivated the reward system for his troops fighting Boko Haram insurgency in the country. He rewards gallantry, but punishes indolence or dereliction of duty.

Like the US war veteran and diplomat, Collin Luther Powell, the Nigerian Army Chief has inculcated in soldiers that “All work is honorable. Always do your best because someone is watching.” And rewards in special promotions’ have been Gen. Buratai’s perfect weapon in bolstering the performance ego and strides of Nigerian troops battling Boko Haram.

Chinese war veteran, Sun Tzu once echoed that “Rewards for good service should not be deferred a single day.” So, Gen. Buratai does it promptly and indiscriminately once any soldier earns it by dint of gallantry, valour and hard work.

Iconic warlords have theorized on the reverence of soldiering. Gen. George S. Patton Jr for instance says; “The soldier is the Army. No army is better than its soldiers. The Soldier is also a citizen. In fact, the highest obligation and privilege of citizenship is that of bearing arms for one’s country.”

Therefore, Gen. Buratai has consistently elevated deserving soldiers to stimulate what Collin Powell clarifies with his timeless and immortal philosophy in positing that; “The healthiest competition occurs when average people win by putting above average.”

From the outset, part of Gen. Buratai’s intrinsic vision and policies sighted reward for gallantry and hard work. Barely weeks after assumption of duty in 2015 as COAS and leader of counter-insurgency, headquarters of Operation Lafiya Dole Command Theatre went agog in wild celebration. Gen. Buratai effected the promotion of over 5,000 soldiers fighting insurgency in the Northeast and allied operations in the country.

He took the action to boost their combat readiness and willingness to serve fatherland. The promotion was a pledge made to the soldiers by his predecessor. Gen. Buratai stated at the opening session of the 2015 COAS Third Quarter Conference, in Army Headquarters Abuja that; “Since we came on board, we have introduced several measures aimed at encouraging our troops to give their best in the service of their nation. “

“The approval of the accelerated promotion of 5,000 soldiers was to redeem the promise made by my predecessor to the troops fighting insurgents in the North-East. It is my belief that this promotion, coupled with other incentives, will encourage our troops to fight for our country,” he added.

And the leader of counter-insurgency operations has kept faith his vision and pledges of reward for gallantry and exceptional impact in the course of battling insurgencies and insurrections in the country. It is outside his implementation of normal promotions timely and promptly to soldiers, like he caused the promotion of 34 senior Army Generals last week.

The then Army’s spokesperson articulated in a public statement that the Army Chief specially rewarded the gallant troops in recognition of their valour and uncommon commitment to duty during the “Operation Deep Punch.” It was an operation that laid to rest the ghost of the much dreaded Sambisa forest.

Later the same year, during one of his frequent visits to the frontlines in Bama, Borno state, Gen. Buratai, also gave special automatic promotion to two soldiers for their gallantry in fighting Boko Haram.

The COAS visited troops of 21 Brigade at Bama and was impressed with their performance against Boko Haram. Troops of the brigade had liberated Bama from Haram terrorists after hours of fierce battle. Many terrorists were neutralized during the encounter, and a cache of arms and Improvised Explosive Device, IED, making materials were recovered from insurgents. Therefore, Corporal Thomas Orim of 202 Battalion and Corporal Abubakar Usman Usman of 150 Task Force Battalion were rewarded with this special promotion.

To Gen. Buratai, it is inconsequential whether it is a single soldier or bunch of soldiers who demonstrates acts of valour or gallantry and merits a reward. A soldier, Master Warrant Officer, Garba Abdullahi of 159 Battalion, Nigerian Army was elevated to the rank of Captain in recognition and reward for his outstanding military professionalism, gallantry, courage and selfless service and enjoyed the special privilege of Executive Commission.

The then Director army public relations officer, Brig. General Sani Kukasheka explained; “Garba Abdullahi’s leadership qualities endeared him to his Commanding Officer who deemed it fit to assign him a higher responsibility as platoon commander of one of the arrow head sub-units of the Battalion, the role he played excellently to the admiration of both his superiors and subordinates alike

“Under his able leadership, his platoon achieved great exploits of daring bravery and courage for which the Battalion was reputed. The 159 Battalion is of one the rugged and most experienced cohesive fighting unit that make up Operation Lafiya Dole…the Battalion primarily occupies a blocking position from where it conducts Counter Terrorist and Counter Insurgency operations to defeat Boko Haram terrorists, deny them freedom of action….”

Gen. Buratai has sustained the string of special elevations, rewards and promotions of deserving officers and soldiers to date. Even in October 2019, he recommended for accelerated promotion to President Muhammadu Buhari two Army Generals and a Subaltern of the Nigerian Army as reward for their gallantry and exemplary leadership.

Acting Director, Army Public Relations,Col. Sagir Musa explained that the soldiers earned the President’s approval for the special promotion for their “extra-ordinary feats, courage, exemplary leadership, loyalty, uncommon commitment and valour in the counter insurgency operation in the Northeastern part of the country.”

The benefitting two senior officers were Maj.Gen. L.O Adeosun, the Chief of Training and Operations at Army Headquarters, who was also promoted to the rank Lieutenant General; Brig.-Gen. A.B Biu, General Officer Commanding 7 Division and Commander, Sector 2, “Operation Lafiya Dole” Maiduguri was decorated with the rank of Major General and the subaltern, Lieutenant A.J Danjibrin of 211 Demonstration Battalion, Bauchi was elevated to the rank of a Captain.

Also, Lt. Col. Mohammed Abu Ali (aka BH killer) who commanded the Army’s 272 Tank Battalion under “Operation Lafiya Dole” enjoyed this rank for the recognition of his outstanding efforts in blighting the fire of insurgents under his area of jurisdiction. Shortly afterwards, he was killed in an ambush by Boko Haram.

The quantum of special rewards and promotions extended to soldiers in the counter-insurgency operations in the Northeast is an apt indication that Gen. Buratai meticulously picks his postings of officers and soldiers. He ensures only his best and competent hands are deployed to every area of military operation.

In the counsel of Collin Powell, “There are no secrets to success: don’t waste time looking for them. Success is the result of perfection, hard work, learning from failure, loyalty to those for whom you work, and persistence.” So, through Gen. Buratai Nigerian soldiers clearly understands that hard work and loyalty is beneficial.

Audu wrote this piece from Abuja.