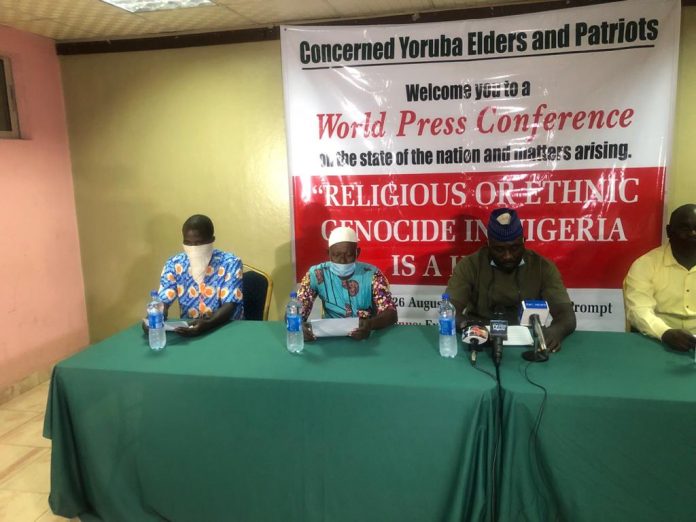 The Concerned Yoruba Elders and Patriots (CYEP) has expressed shock over a report by the United Kingdom’s parliament, adding that such is targeted at creating ethnoreligious divisions in the country.

CYEP at a press conference on Tuesday said allegations of genocide against Christians in Nigeria are not only false but capable of provoking crisis among religions.

Speaking on behalf of the group, converner Arokoyo Sunday warned that the implication of such claim could have a devastating effect on the peace and unity among Nigerians.

While admitting pockets of violence in some parts, CYEP said it has no religious colouration as Christians are targeted just like Muslims and other religious groups.

” We were shocked to read the statement credited to some foreign organizations accusing the Nigerian government of supporting genocide against Christians. Firstly the accusation of genocide in Nigeria is false, secondly, the notion that the Nigerian government is in support of such heinous crime can only be regarded as a joke and nothing more,” Mr Sunday said.

” There is no genocidal killing of Christians in Nigeria, it is a hoax. There are definitely some security challenges in Nigeria where Christians are murdered and we admit that just as Muslims are equally killed in some conflicts but these murders are not carried out because either of the parties involved is Christians or Muslims. In most cases, there are several deep-seated underlying community issues involved in these conflicts.

” With the continuous increase in population and massive desert encroachment ongoing along the Sahel of the Sahara, the contention for arable land for farming activities, grazing and other economic activities become more intense. This has led to an escalation of hostilities between herders and farmers. Which sometimes results in violent clashes.

” For those who are ignorant of these facts they may quickly buy into the one-sided narration of Christians only being murdered or the genocide hoax. There are also the second group of people who know the truth but choose to be mischievous for whatever parochial reasons. These second group of mischief-makers are actually the fuel for the false narrative and propaganda of genocide against Christians, currently ongoing.

” Whilst they may or may not know the implications of their actions, we are however clear and very much aware of the implications of such evil propaganda. The impact of such fake news on the current harmonious peace we are enjoying amongst the different faiths and religions in the country can be very devastating.

The Concerned Yoruba Elders and Patriots, however, urged the United States, UK and international community at large to take notice of organizations and institutions that weaponize fake news to twist the Nigerian reality to suit their wishes and caprices.

It assured that “President Muhammadu Buhari since coming into power has always made his intentions clear. His determination to fix the security challenges in the north and in fact all of Nigeria. What the government needs now is support from all of us. This is a very wrong time to begin to stir up or whip religious conflicts across the country. The devastation of the effect of such may consume everyone”.

The group further urged religious leaders across the country to continue to preach unity and tolerance amongst their followers.