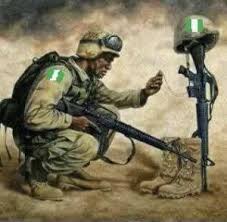 A Nigerian based in the United States of America, Mark Bolaji, has written a poem in honour of the Nigerian Armed Forces with particular emphasis on the sacrifices of the Army in the fight against Boko Haram.

The poem titled “Gallant Nigerian Army; Our petals of daffodils” echoed the sacrifices of the gallant troops on the frontlines.

Mr Bolaji recalled the havoc-wrecking era where Boko Haram enjoyed a seamless ride in the NorthEast but thanked the gallant troops for finally ensuring “salvation came banging hard and hard”.

“As soldiers clad in vexation and armoury, gallant soldiers reclaimed Nigerian territories,” he added while describing the manner victory arrived.

The Houston Texas-based poet cheekily described the Chief of Army Staff (COAS), Lieutenant General Tukur Buratai as “Shagaban Shoja,”who climbed atop the Limankara Hills in bold and blustery affront” to lead the assault on insurgents.

In the famed land of the El Kanemis,

The kingdom of ancient warriors,

Deaths, and blood and destructions; mid-night

Arsons punctured the serenity of the land of promise,

As spirit of forebearers, armor bearers and multitudes alike,

Voyaged into the swamps and mesh of the hinterland,

In depressing searching for water to quench their thirst,

In satanic service of paymasters in foreign lands,

Bowing to bizarre and opaque doctrines of extremism,

With slavish and unconscionable condour,

In the fury of unrestrained bloodletting,

Of Haram captors, slaving and laboring in resigned fate,

Only reminiscent of the slave trade of yore.

Starved to the marrow and slaughtered,

By alien paymasters, in distant lands,

From the greens and oils of the Lake Chad,

Feasted and feasted on human blood,

With sacrilegious impunity on souls and blood of kins.

Spared no foe or enemy,

All were united in grief and sorrows,

Despaired over deaths, abductions and bloodbaths;

Or student, traders and kings all soaked in misery.

Yearned for familiar faces and shadows,

As Gwoza, Bama, Mongonu and others,

As extremists of the swords, regaled in undulating ambience;

Insurgents made burnfires and carnivals,

Over children, women and the aged.

But at last, salvation came banging hard and hard!

On the manacled doors of Northeast,

As soldiers clad in vexation and armoury,

Dispossessed many, grabbed their evil arsenals,

In weeks and months of fierce combats,

To forcefully transit their cursed souls into graves,

Occupied by the ragtag Armies of the evil sect.

On war chariots, with machine guns and bombs,

But suffered humiliating repression and defeat,

In Tens and thousands of numbers.

Reclined into the obscure fortified mazes,

Of the swampy Lake Chad Basin, gasping for breath,

Licking wounds of a mission unfulfilled and doomed.

Yesterday, a dove hovered on the skies,

On Gwoza, Madagali, Pulka and Bama,

Climbed atop the Limankara Hills,

In bold and blustery affront and assault on insurgents,

From palaces, to soldiers in the frontlines,

At the sight of Buratai and troops,

Into the remotely innermost chambers of rugged Lake Chad,

A mission soldiers would have easily cracked,

With a final “kill,” and lightning speed, with handy Army helicopters.

Enmeshed and ensnared by boardroom politics;

Though, there is a season for everything;

Its time would certainly come soon!

We keep vigil on the pearly gates,

Of soldiers’ final onslaught on terrorists,

In the land of the famous El Kanemis!