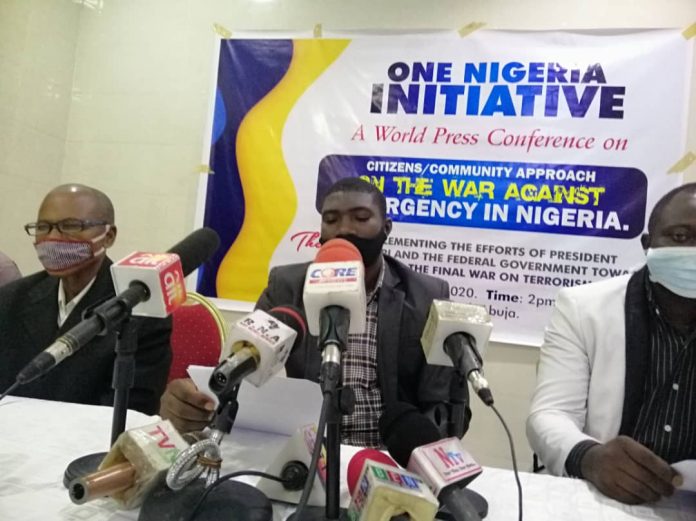 A group under the aegis of Initiative for One Nigeria (ION), have vowed to hold massive campaigns to create awareness in support of the military’s efforts in the war against Boko Haram/ISWAP terrorists.

Speaking at a press conference on Thursday in Abuja, Secretary-General, Comrade Ohene Dominic Ejembi, said there is need for active participation by all citizens, stressing that the war against the insurgents shouldn’t be left alone for the Federal Government and military.

According to ION, from its findings, there has been neglect from politicians, community heads as well as relevant stakeholders in charting a solution to the insurgency.

Describing the efforts of the military so far as “brilliant”, the group believes much more can be achieved if all and sundry would elect to come together and support the Nigerian military wholeheartedly.

The Initiative for One Nigeria, however, reassured by closing all gaps and working together with the military, the country will experience a rebirth in the coming days.

The Initiative for One Nigeria, an organization dedicated to the peace and progress in Nigeria welcomes you all to this important press conference convoked in the light of the fact that there has been an erroneous mentality that the war against insurgency is the preserve of the Federal Government /Military alone.

While it is understandable that this line of thought has been entrenched in the system for so long, however, it is not too late to change the mentality to that of collective endeavour rather than a job for the Federal Government/Military alone.

It is instructive to state that the Initiative for One Nigeria has carried out extensive research on why the war against insurgency in Nigeria is prolonged and the findings from the various reports indicate that there has been near neglect of charting a Nigeria solution to the insurgency and the critical stakeholders have not availed the much-needed support.

The Initiative for One Nigeria states that there is no better time for all and sundry to come to the table and work with the Federal Government in the fight against insurgency as these insurgents are not spirits but humans that reside in Nigeria.

It is indeed a statement of fact that ending the Boko Haram scourge rest within us as Nigerians because we have the wherewithal and the know-how to end the insurgency, but a situation where the citizens are not cooperative with the Federal Government and the military, there would always be setbacks. This is not restricted to Nigeria alone but in other climes that have experienced insurgencies and successfully overcome it.

We must also realize that the effort to end Insurgency in Nigeria must be a collective one, and the time to act is now. The participation of the citizens of Nigeria is as critical as the efforts of the Nigerian Military in the insurgency crisis in Nigeria.

It is common knowledge that indeed there have been gaps that were created as a result of the nonchalance and the politics of bitterness as displayed by some members of the political authorities in North-Eastern states in the country as well as other parts of the country. This has to end as a matter of urgency.

It must be noted that the role of the community leaders in ending the Boko Haram scourge cannot be overemphasized. And this much they must realize and extend their support to the Nigerian Military because at the end of the day, Nigeria would be the ultimate beneficiary.

The Initiative for One Nigeria is of the firm conviction that Nigeria can defeat the Boko Haram insurgency especially with the level of commitment displayed by the Military since 2016 when it gained ascendency over Boko Haram and the consequent recapturing of all Nigerian territories that were hitherto under the control of the Boko Haram group.

The dislodgement of the Boko Haram group from their operational base in Sambisa forest is another highlight of the efforts of the Nigeria Military in the war against insurgency in Nigeria. It is thus our considered opinion that should the efforts of the Nigerian Military had been complemented with support from other critical stakeholders; the war against insurgency would have long become history in Nigeria.

This also reinforces the position of the Initiative for One Nigeria, as well as other groups of like minds that have been advocating for cooperation from all and sundry in support of the efforts of the Nigerian Military thus far.

We wish to place it on record that this position of ours should not be construed to mean that support from the civil populace has not been availed, but rather not in the right proportion and this is responsible for where we are today in the war against insurgency.

The Initiative for One Nigeria wishes to state that should Nigeria get overwhelmed by the Boko Haram scourge, we would all have our selves to blame because of the opportunities to proffer Nigeria solutions to the Boko Haram Insurgency has been availing itself to us in ways too numerous to mention.

It is a function of two things; its either we take the opportunities and end the insurgency, or we live with the consequences of the insurgency that has already claimed hundreds of thousands of lives and displaced millions of people.

The Initiative for One Nigeria is holding this press conference as a clarion call to all citizens of our great country in absolute reverence to our National Pledge to Nigeria our country, to be faithful, loyal and honest. To serve Nigeria with all our strength to defend her unity and uphold her honour and glory so help us, God.

The Initiative for One Nigeria is confident that in the coming days and weeks, there would be a rebirth in the country where all Nigerians regardless of their ethnic and religious affiliations would come together and assist the Nigerian Military in the war against insurgency in Nigeria.

It is indeed time to end insecurity by closing all gaps and working together with the Nigerian Military as they continue to push for the final decimation of the Boko Haram group.

I thank you all for your patience and time, and we desire that in no distance time, Nigeria shall be indeed free from the threats posed by the Boko Haram group.