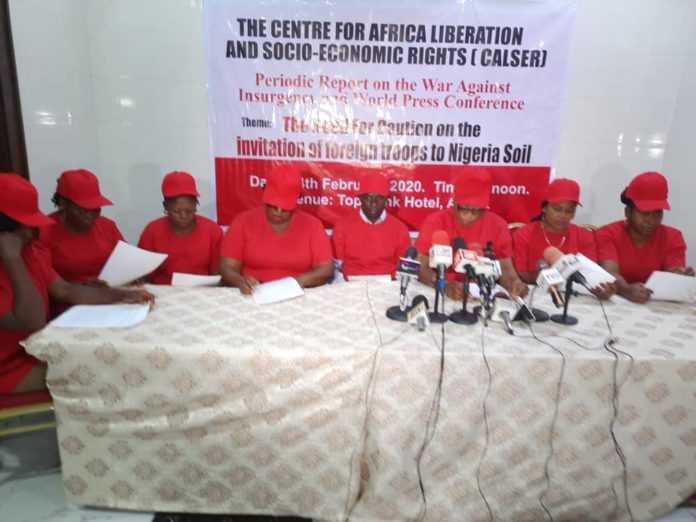 The Centre for Africa Liberation and Socio-Economic Rights (CALSER) has warned Governor Babagana Zulum of Borno State and other state governors against engaging Chadian soldiers to help fight insurgency as it would be counterproductive.

CALSER’s counsel trails Gov. Zulum’s visit to N’Djamena, capital of the Central African nation in January, where he met with Multinational Joint Task Force to discuss security-related issues in Borno.

Reports followed that the governor had finalised plans to employ the services of Chadian troops and CALSER believes the move would be counterproductive.

Speaking at a press conference in Abuja on Monday, President, Princess Ajibola, revealed that Chad, like other Francophone neighbours, haven’t demonstrated genuineness of purpose in the war against insurgency.

According to the group, Chad has now become a safe haven for fleeing Boko Haram insurgents when they come under heavy bombardment from the Nigerian troops.

CALSER, therefore, advised Zulum and others pondering following his lead to desist from undertaking actions and commitments that are capable of breaching National Security in Nigeria.

The leadership of the Centre for Africa Liberation and Socio-Economic Rights welcomes you all to this press conference conveyed in furtherance of the objective of ensuring that the peace, progress, and unity of Nigeria is preserved for this generation and indeed the future generations of our great country.

We are unrelenting in this pursuit of national interest that has seen the Centre for Africa Liberation and Socio-Economic Rights advancing causes that would protect and preserve our nascent democracy over the years through our vibrant advocacies that have in time past yielded the desired result in the overall interest of the country.

Consequently, the Centre for Africa Liberation and Socio-Economic Rights wishes to use this medium to call on the governor of Borno State, Professor Babagana Zulum, to ensure that his actions and inactions as governor of the state are geared towards the restoration of peace in Borno State and its environs.

This became necessary in the light of some of the actions embarked upon by the governor in his quest to bring about peace in Borno State. While this is indeed commendable, it must be stated in unequivocal terms that such actions must be in the best interest of the country and, in conjunction with the security agencies, as anything short of this would be unacceptable and rejected in its entirety.

It must be stated that the war against the Boko Haram terrorism has been indeed onerous, and the consequences of such cannot be overemphasized in the lives of the people of North-East Nigeria. As such, this call for great reflection in our conduct as national interest should and must always supersede personal interest.

It is indeed common knowledge that the governor of Borno State has been hobnobbing with some neighboring countries under the guise of finding a lasting solution to the Boko Haram menace in Borno state and its environs.

However, it must be known that Francophone countries indeed surround Nigeria, and France and her allies in Cameroon, Chad, and Nigeria have not demonstrated a genuineness of purpose as far as the war against insurgency is concerned.

This is on the heels that it is also a known fact that the Boko Haram/ISWAP groups have found these countries as safe havens when they come under heavy bombardment from the Nigerian troops. From there, they regroup and launch offensives against Nigeria.

This is also cognizant of the fact that there is a French military base stationed in Ndjamena, the capital of Chad. Yet, the activities of Boko Haram thrive with the unhindered supplies of arms and ammunition and other logistics aiding their nefarious activities.

The Centre for Africa Liberation and Socio-Economic Rights have, in times past, brought this despicable act to the public knowledge with undisputed facts and therefore sees no moral justification in the actions of the governor of Borno State in hobnobbing with those that are not interested in the unity of Nigeria.

We consequently wish to state that the governor of Borno State must be guided in this regard and desist from undertaking actions and commitments that are capable of breaching National Security in Nigeria.

He must realize that, indeed, Nigeria faces a threat to its sovereignty from unlikely places. As such, he must do all within his mandate to be a partner of progress and not a clog in the wheel of progress.

We must indeed enlighten him that whereas France continues to hold seminars and workshops on how to tackle terrorism, the terrorists continue to use French weapons to kill innocent Nigerian citizens. These despicable actions must not be allowed to thrive if we are indeed desirous of bringing to an end the Boko Haram menace in North-East Nigeria.

The Centre for Africa Liberation and Socio-Economic Rights wishes to use this medium to advise other state governors to desist from acts that would undermine National Security. They must, as a matter of urgency, begin to retrace their steps, the interest of peace and tranquility.

They must indeed know that posterity would not be kind to them should they allow themselves to be used by agents of the destabilization of Nigeria in their inglorious objective of entrenching violence and bloodletting in Nigeria.

Their actions and inactions must be geared towards the interest of Nigeria and not otherwise in the prevailing circumstance that requires all hands to be on deck towards making Nigeria the country of our dreams.

The Centre for Africa Liberation and Socio-Economic Rights would not hesitate to name and shame these governors if that would bring about patriotism and the peace and unity of Nigeria.

It is our considered opinion that those elected to govern do so with absolute sincerity and the fear of God.

The leadership of the Centre for Africa Liberation and Socio-Economic Rights thanks you all for finding time to attend this press conference despite your busy schedules and wishes to state that the peace and unity of Nigeria must be our cardinal objective.

Thank you all and God bless the Federal Republic of Nigeria.