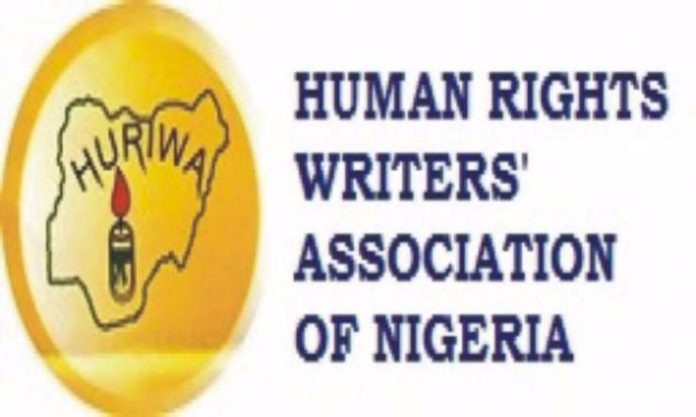 The National Democratic Force (NDF) has lashed out at Human Rights Writers Association of Nigeria (HURIWA) over what it called derogatory statement on President Muhammadu Buhari’s commitment to the nation’s peace and tranquility.

The National Security Adviser had proposed a convocation of a dialogue session amongst ethnic nationalities in order to promote national harmony and tackle the nation’s security challenges.

The group accused HURIWA of attempting to mislead Nigerians on this Federal Government’s security blueprint as published by the office of the NSA and also calling on President Buhari to deproscribe the Islamic Movement of Nigeria (IMN) and Indigenous People of Biafra (IPOB) despite obvious atrocities committed.

In reaction, however, the National Democratic Force described HURIWA as “cobbled assemblage of comical characters” who jumped to discredit an initiative they have no clue about.

The NDF made this known in a press conference on Thursday in Abuja.

In a statement signed by Secretary General, Dr Abdulkadir Bolajai, the group reasoned that HURIWA should be ashamed that President Buhari, whom they have labelled as a dictator, has brought a democratic solution to the problems created by their paymasters.

According to the group, HURIWA’s stance isn’t surprising as they’ve always attempted to pitch Christians against Muslims through the claim that the FG’s appointments were lopsided in favour of the latter.

While applauding President Buhari and the NSA for coming up with such initiative, the NDF dismissed HURIWA’s claim as falsehood of industrial proportion.

It added that “HURIWA and its paymasters are the agents of destabilization and the promoters of disunity, rancor and hate amongst the citizenry through their financially induced activism”.

Gentlemen of the press, we thank you for honouring our invitation to this press briefing, which we must state from the onset is informed by the criminal attempt by the Human Rights Writers Association of Nigeria (HURIWA) to mislead Nigerians on the Federal Government security blueprint as published by the office of the National Security Adviser. This blueprint aims to add the element of dialogue and consultation to other existing measures that have been deployed to address insecurity and crises in the country. Through the proposed intervention, the government will engage sectional and factional groups in an exercise that will deliver confidence building among the ethnic and religious divide in the country, which is expected to go a long way in addressing some of the nation’s security challenges.

But HURIWA, as we know it to be a cobbled assemblage of comical characters, who hardly ever know whether they are coming or going, have jumped on this initiative with the intention to discredit it without having first studied the merits of the plan. Rather, HURIWA contrived series of negative connotations and tenuously attempted to latch them onto a plan that right thinking citizens of the country are describing as long overdue. The proposal was for them a primer that reawakened the irrational hatred of President Muhammadu Buhari, which seems to be the only cause left for HURIWA to fight.

This perhaps explains why HURIWA express anger that a President Buhari, whom they have labelled a dictator is the one man that has come up with a democratic solution to the problems created by their paymasters. They were now compelled to create lies about how appointments were lopsided and how a particular section of the country is favoured. Interestingly, this is a tired and worn out propaganda since there have been enough statistical data crunching to dispel this lie.

It is most unfortunate that an organization that markets itself with the moniker of “Human Rights” can be callous enough to stereotype an ethnic nationality, the Fulani, even when there have been several instances of persons of other ethnic extractions being caught committing the crimes for which one ethnic group is demonized. The conclusion can only be that HURIWA is desirous of provoking a pogrom against the Fulani, which is definitely not in keeping with what an organization that tout the human rights credentials HURIWA is throwing around.

The perverted pattern favoured by HURIWA manifested even in its partisanship as it was practically blaming President Buhari for the election loss suffered by its sponsor, the Peoples’ Democratic Party (PDP) in Kogi state and in just about any other place the party had a bad showing on account of voters associating it with its corrupt past. That HURIWA could descent so low to attempt passing off transactional activism as the interest of the people is sickening and must be condemned. Nigerians must not be deceived to think they are hearing from a human rights group when in reality they are being lied to by the NGO arm of political party that also moonlights for terrorists as we shall see later.

The danger posed to Nigeria by HURIWA was glaring in the manner in which it attempted to pitch Christians against Moslems through the claim that federal government appointments were lopsided in favour of the latter. It amazing that an organization that dabbles in the acclaimed field has never thought it wise to advance the rights of the animists, atheists, agnostics and other creeds that do not fall under its two preferred faiths. To its own discredit it continues to attempt deepening the Judeo-Islamic schism that has done much to destabilize Nigeria and impoverish the population. Such groups should in reality be added to the list of those to be invited to take part in the proposed dialogue session in the hope that those running it will leave the sessions enlightened.

The pettiness of HURIWA was amplified for the world to see when it claimed that it was wrong to site projects in underserved areas by inferring that it amounted to the president pushing projects to Daura. Nigerians can now see for themselves that this is an organization that does not want the rural-urban migration challenge to be addressed.

What perhaps capped HURIWA’s irresponsibility is its ethicizing the entire issue by claiming Igbo marginalization. This has been something that several groups had taken umbrage against HURIWA in the past as it is highly dangerous. Rather than promoting the “Igbo Marginalization” war chant, it should have run a campaign for the affected ethnic group to learn the art of horse trading, compromise, collaboration as opposed to the belligerence on the part of a few people from that region. But this will hardly happen since the persona behind HURIWA, Emmanuel Onwubiko is too far consumed by ethnic extremism to be able to reach such logical conclusion.

The biggest fraud in the position taken by HURIWA is the way it sought to manipulate constitutional provisions to mislead the populace. What it did with the sections of the constitution that it cited was to cherry-pick and convolute matters such that logic is stood on its head. There is no point going into the list of lies and misrepresentation here because it would be a waste of our time here.

The worst of all is HURIWA’s persistence on supporting terrorism. It could not resist the temptation to use its tirade as a terrorist manifesto through its expression of support proscribed terrorist groups, namely: the Islamic Movement in Nigeria (IMN) and the Indigenous People of Biafra (IPOB). We hope the irony is not lost on Nigerians that the same HURIWA that was demonstrating an extreme version of Islamophobia is willing to be in bed with a terrorist IMN just as it was citing the constitution while supporting an IPOB that is working for the disintegration of the country. That HURIWA can speak against the law taking its course against those bent on destabilizing Nigeria speaks volume to its true intention for maligning the federal government, President Buhari and any entity that stands for the good of Nigeria.

We therefore dismiss HURIWA’s claim as falsehood of industrial proportion. HURIWA and its paymasters are the agents of destabilization and the promoters of disunity, rancor and hate amongst the citizenry through their financially induced activism. We invite all well-meaning Nigerians to condemn this fraudulent war mongering NGO for what it is. Brazen criminality.