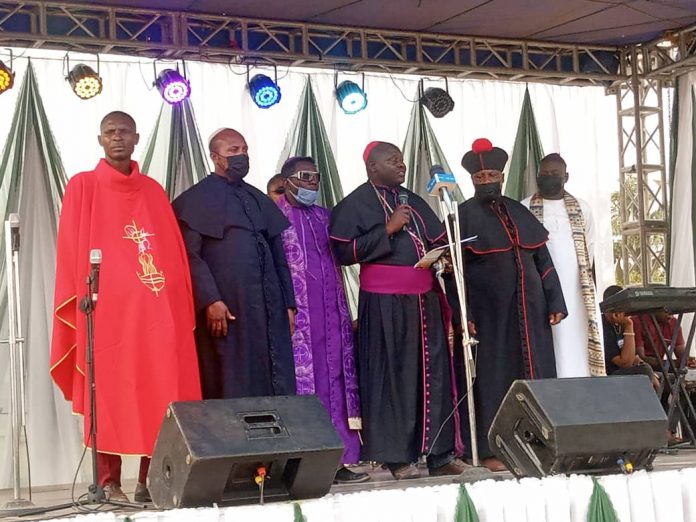 Some Christian clerics under the auspices of Northern Clergy and Christian for Tinubu 2023, on Thursday, staged a special prayer rally for the national leader of the All Progressives Congress (APC) and 2023 presidential hopeful, Asiwaju Ahmed Bola Tinubu, at the Unity Fountain, Abuja.

The Christian preachers claimed that the decision to pray for the presidential ambition of the former Lagos State Governor was informed by the Holy Spirit.

The clergies offered prayers for the will of God for Senator Tinubu’s presidential ambition to come to fruition at the rally which was also well-attended by their followers.

Speaking to journalists shortly after the one-million man prayer rally, the convener, Bishop Sunday Garuba, said God expressed it in their hearts to pray for Tinubu’s presidential ambition.

He said it was the culture of the organisation to always pray and intercede for Nigeria.

“And looking into that as we went to prayers, God expressed in our hearts to pray and to intercede. And we are praying, God also expressed in our hearts to pray for Senator Ahmed Tinubu because of his track records of how he had led. He is one man that has led before as the Governor of Lagos State. And for his wisdom and his ability as a man. He is not a tribalistic man. And also at the same time, he is not biased in his religious affiliation.

“That prompted our hearts to pray and to call on God so that God will give us the right leader to lead this nation.”

In similar vein, one of the clerics and Lead Pastor of Fountain of Praise, Bishop Lawrence Ungene, said Tinubu has the requirements to lead Nigeria.

He said: “We came together to pray for a person by the name Tinubu Bola Ahmed who has a trajectory records of leading this nation.

“Because all powers belong to God. Nobody comes into authority except by the will and permission of God. It is only God that can approve for a man to come to authority. The will of God concerning Bola Ahmed Tinubu will be realized.