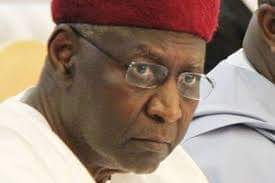 “Hopes placed in mortals die with them; all the promise of their power comes to nothing.” – Proverbs 11:7

In the end it is the verdict of history that matters. The legacy one leaves is what endures after the silver lining is severed from mortal body. The conclusion can be telling and leave a stain of ridicule, derision and scorn. It is for this reason those who wield power – elective or appointive- should strive to gauge public feelings and respond appropriately.
It was a heavy thud when in the early hours of Saturday it emerged that the reclusive, taciturn and seeming unfazed Mallam Abba Kyari, Chief of Staff to President Muhammadu Buhari, has cut off ties with mortality. Immediately the news broke on Twitter by presidential aides, Femi Adesina and Garba Shehu, reactions swept like a tidal wave. While some ogled and were thankful, others showed empathy and sobriety. It was expected, after all, the late Kyari was a controversial figure, some say, divisive.
When the deceased tested positive to the novel coronavirus, the country was faced with binary choice: either for once to use the opportunity to gain public trust and restore confidence in its vouchsafed transparency and anti-corruption stance or double down on a defense of privacy, with the implications for public health and general anomie.
As expected, the Presidency of Buhari towed its infamous path of opaqueness and public scorn by spiriting the famed head of the ubiquitous cabal to secret private facility instead of following its own health protocol on the deadly Covid-19. Asked by journalists on the whereabouts of Kyari, Secretary to the Government of the Federation, Mr. Boss Mustapha and Minister of Health, Osagie Ehanire, were dismissive and incredulously say it was not important.
It was imperative then as it is now. The demands of public office include being honest, transparent and accountable however inconvenient. To diss the public and make a spectacle of its demand to be held up to scrutiny belongs to primitive and authoritarian societies which I doubt Nigeria is, perhaps, a quasi-one.
When Kyari was in the bloom of clout and at the apogee of power, he was committed to creating a mystique of being the Silent One but who gets things done. Due to his reticence, myths abound, stories woven and tales told of his omnipresence and endless depth of his command. Despite the far-reaching accusations of corruption, the pervasive and suffocating grip on the president even from the family of Buhari, never for once did the late Chief of Staff reacted or budged. Not even a verbose and intemperate radio host in the nation’s capital could draw him out.
To his credit, his traducers did not go missing or raised the alarm of being harangued by agents of the state unlike we have in states and even with some officials of the Presidency. Kyari remained stoic seeming unmoved by the avalanche of missiles hurled his way. Perhaps, he knew what millions of never knew and may never get to know. He understood the mind of the president and will not yield to the tantrums and crabbiness of those who see him as Medusa incarnate.
It is something of a wonder that for a man who was schooled in the best traditions of the English and their commitment to being answerable to their citizens to hold his own to such contempt is intriguing.
Since late night, I am piqued and have wondered, did he write a memoir? Is there a secret tape to explain his seeming aloofness and detachment from all that was said and aimed at him? Was he so insulated from the reality of his position that he became immune to the vagaries and foibles of power? Did he drink too much of the tocsin of presidential Bacchus, and became drunk on its dregs? These are questions that in finding answers to invariably are subject to speculations.
Would Kyari’s passing provide an opportunity for introspection and place a burden on this administration as well as many a politician to act responsibly in this Covid-19 crisis? Like it is wont to be said, time shall tell!