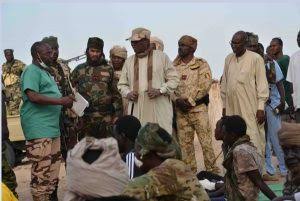 The National Democratic Front (NDF) believes the Peoples Democratic Party has once again exposed the height of its hypocrisy and dangerous ignorance by comparing President Muhammadu Buhari to Chadian President, Idriss Deby.

The PDP had insinuated that President Buhari should be physically present at the war front like his Chadian counterpart recently did.

In a statement signed by Secretary General, Dr. Abdulkadir Bolaji, on Wednesday, the NDF mocked the PDP for being benighted with the Constitution despite almost two decades at the helms of affairs.

As a democrat, the NDF said that President Buhari appointed competent military chiefs that degraded Boko Haram, reduced to conducting cross border attacks from the territory of the same Chad and its francophone neighbours – Niger and Cameroon.

Instead of drooling over the Chadian President, the NDF advised the PDP to visit Deby and find out why his country took so long to address the presence and activities of Boko Haram in its territory.

The group expressed shock that the opposition party ignored France’s influence on Chad and Nigeria’s other francophone neighbours, which has made it impossible for these countries to support terrorism.

NDF, however, urged the PDP to “ wake up to the realty and see President Deby’s one-off stunt in leading Chadian troops against Boko Haram as a case of a relationship turned sour, a mere case of things gone wrong between two thieves or equally ferocious terrorist factions.”

The National Democratic Front (NDF) is amused at the position of the People’s Democratic Party (PDP) for heaping scorn on the government of President Muhammadu Buhari while praising Chadian President Idriss Deby, whose country’s troop recently took on Boko Haram terrorists in the Lake Chad Basin area. PDP’s response to the development has exposed the height of its hypocrisy and dangerous ignorance of what is at stake.

PDP, ignorant of the details behind the Chadian military operation against Boko Haram, rushed to join beer parlour commentators by suggesting that President Buhari should have been physically present at the war front against the terrorist like Deby. This suggestion is a confirmation that the PDP, in spite of all the years it held Nigeria hostage when it was in power, simply does not understand that the Constitution of the Federal Republic of Nigeria (as amended) anticipated Mr. President to delegate his functions as the Commander-in-Chief.

As a democrat and good manager, President Buhari had appointed competent military chiefs that had in the past years degraded Boko Haram by as much as 90%; the terror group that once laid claim to a caliphate has been reduced conducting cross border attacks that are planned and launched from the territory of the same Chad and its francophone neighbours – Niger and Cameroon. What the Chadian troops had to deal with are part of the terror group’s remnant that usually makes cross border incursions into Nigeria.

Instead of drooling over the Chadian President, the PDP should have used the opportunity presented by the joblessness of its senior officials to visit Deby and find out why his country took so long in addressing the presence and activities of Boko Haram in its territory. A sincere Deby will perhaps educate them that he was more vested in exacting revenge for the over 90 troops that Boko Haram terrorists killed after relations between the group and Chad deteriorated. It borders on mental incapacitation to accept that Boko Haram would have an operational bases on that scale within sight of Chad and the country’s government was not aware of it until its troops were attacked.

It is also surprising that PDP chose to ignore the toxic influence that France exerts over Chad and Nigeria’s other francophone neighbours, which has made it impossible for these countries to support Nigeria in tackling the menace of Boko Haram. If the PDP is smart enough, it would have used its statement to urge Dby and his francophone counterparts to take Chad out of France’s strangling embrace for the region to become truly independent and be able to rid itself of the murderous terror group.

But these are lofty ideals that cannot be expected from a PDP that as recently as the last General Elections hired foreign mercenaries to carry out copycat attacks that mimicked Boko Haram in order for it to create the impression that security has degenerated under President Buhari and should thus not be re-elected. This was a development that NDF sufficiently raised the alarm about at the time and we will not be surprised that the PDP will be able to pick out the weapons they bought for terrorists from the caches of arms seized by Chad from the military operations. Maybe their rush to make PrPresidente look good is to forestall the holding of such weapons identification parade.

PDP must wake up to the realty and see President Idris Deby’s one-off stunt in leading Chadian troops against Boko Haram as a case of a relationship turned sour, a mere case of things gone wrong between two thieves or equally ferocious terrorist factions. The party should not be in a hurry to conclude that Mr. Deby has repented and is no longer a Boko Haram sponsor in the Lake Chad region. NDF will like to believe that President Deby has finally switched sides for the good will no longer harbour the terrorists and Chadian rebels to torment the region, but this will amount to expecting a miracle.

NDF will not bother to recommend to the PDP to go study President Deby’s democratic credentials because that will force the party to remove the word “democratic” from its name since it has suddenly found a dictator of 30 years as a shining example to hold up to the world. What we will do however is to ask PDP to stop dancing on the graves of the victims of the terror group it created with its years of misrule. Without PDP’s wasted years in power there would be no Boko Haram.