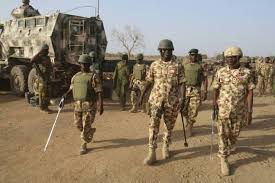 It is absolute trite repeating the visible and unassailably signposted positive impacts of the Government of President Muhammadu Buhari on combating Boko Haram insurgency and its Islamic State West Africa (ISWAP) terrorist’s booster in Nigeria. It is clear-sighted enough that despite the odds stacked against the conclusive prosecution of the Boko Haram/ISWAP terrorism in Nigeria, the Nigerian Army under Lt. Gen TY Buratai has sustained its determination to defeat, rather than being defeated by the terrorists.

Anywhere one encounters Nigerian soldiers either on the battlefield or by the roadside, in the Northeast, they exude passionate, courageous and irrevocable spirit of certainty in finally subjugating the evil tormenting Nigerians. Sometimes, even in video clips from the Northeast theatre of the war, released intermittently on social media, Nigerians sight soldiers jubilantly displaying acts of gallantry, when they triumph over Boko Haram insurgents. More penetrating is seeing troops fighting and caring for the old and young; children and women who are most times rescued from the terrorists and even administering oral polio vaccine as a first step to living a normal life again.
It is representatively symbolic of general excitements and the humane reflection of troops in the frontlines to show rare kindness and love. It inspires and assures of the troops’ anticipated last victory against Boko Haram at the cost of anything, including sacrificing their lives.

Today, Nigerian soldiers anxiously look forward to that hour with eagerness; the day they would be feted with garlands as heroes and heroines of counter-terrorism globally. The meekness and affection of troops towards those they fight for can only be found in rare cases and only amongst the Nigerian troops confronting the insurgents.

Leader of the counter-insurgency operations and Nigeria’s Chief of Army Staff (COAS), Lt. Gen. TY Buratai has effectively worked on the hedgy psyche of troops in confronting terrorists on the battlefield. Nigerian soldiers are no longer the previously known demoralized lot, which flinched in the frontlines in the face of danger. Nigerian soldiers have no cause to again protest against lawful directives from their commanders or freely indulge in mutiny against superiors because of the injustice in the system, which also gravely affected their welfare. The narrative is discernibly not the same.

Media reports recount that from September to December 2014 alone, Nigerian soldiers, including senior officers faced Court Martial at different times on charges of mutiny over the counter-terrorism war in the Northeast. Sadly, many were convicted for mutiny and were jailed for various terms or even sentenced to death. Sometimes, expositions on such unfortunate incidents in Nigeria’s years of counter-terrorism combats preceding the Buhari Presidency are hotly disputed or challenged with a partisan flavor by some Nigerians.

But a report in the BBC News anchored by Ross Will, published on September 16,  2014 stated that 12 Nigerian soldiers “… have been sentenced to death for mutiny and attempted murder after shots were fired at their commanding officer in the north-eastern city of Maiduguri in May… Front-line troops often complain that they lack adequate weapons and equipment, while there have also been reports that they have not been paid or properly fed.”
The Guardian (online) published on same date, reported that “Demoralized soldiers have told the Associated Press that they are outgunned by the insurgents, frequently are not paid in full, and feel abandoned on the battlefield, left without enough ammunition or food. Endemic corruption in Nigeria means millions of dollars budgeted for the fight against the extremists goes missing.”

And in another report by the Independent (Online) by James Rush dated December 18, 2014 also chronicled such mutinies and convictions of 54 soldiers for refusing to battle Boko Haram insurgency. The report served the world the same nauseating narrative bordering on welfare of soldiers.
It said; “Troops regularly complain they are outgunned by the militant group, while some have also claimed they were not paid in full or were “abandoned” on the battlefield without enough ammunition or food.”
Apparently, the Nigerian Government and Military authorities of the time, probably never heard the voice of William Lyon Mackenzie King, a Canadian politician who once clamoured that;  “If I am outspoken of the dangers of intemperance to members of our armed forces, it is because we are all especially concerned for the welfare of those who are risking their lives in the cause of freedom.”

Our country was embarrassed with a dozen of such ugly incidents of mutiny or withdrawal from the battlefront in the face of menacing enemies before the Buhari Presidency. It manifested mainly because the welfare of soldiers, and even troops on the battlefield in the Northeast was largely ignored and neglected. It created the atmosphere for the expression of rampant mutinies and its damning negative effects on the counter-insurgency operations.
But Gen. Buratai has acted differently as a leader and soldier who knows the pains of soldering and the inescapable reality  of placing premium on soldiers welfare, as Sidney Sheldon, famed American novelist contemplated thus; “My heroes are those who risk their lives every day to protect our world and make it a better place – police, firefighters and members of our armed forces.
The principle of welfare of soldiers and troops is a two-pronged approach. It is undeniably welfare, that is prompt payment of salaries /allowances and special interest in their families. And secondly, the provision of adequate and sophisticated fighting equipment for soldiers to protect the people and themselves in the battlefield.
Gen. Buratai has remedied both problems since becoming the helmsman of the Nigerian Army, by elevating soldiers’ welfare with an unbeatable attention and focus. He religiously sticks to Army’s welfare remuneration packages as stipulated by extant laws.  Salaries are paid promptly, and same for allowances, which are paid fully to soldiers and troops in the Northeast or those elsewhere within Nigeria, on special assignments.

It is a rewarding departure from the tradition of the past and reason troops on the frontlines are voluntarily goaded to extra-miles and into the deepest valleys with him in the counter-terrorism wars for the past four years. The psychologocal impact of this welfare is now being reflected in the troops. They have learnt to be humane towards those they fight with their lives to protect.
The successes recorded by the Army under Gen. Buratai are incalculable and proudly commendable because of this simple commitment.
The Army Chief frequently visits troops at various locations to either supervise or celebrate special festivities like Sallah, Christmas/New Year with troops.
An anonymous thinker hints about the secret of loyal followership by stressing that “To be kind is more important than to be right. Many times, what people need is not a brilliant mind that speaks, but a special heart that listens.”  Another anonymous author espouses this same idea by saying, “Empathy is the most important leadership skill needed today!”
So, all the times, when Gen. Buratai visits troops, he dusts his toga of a boss and descends to the level of freely interacting even with the least junior Army Personnel during bonfire carnivals for the celebrations. The Army Chief has convened several open parleys with troops in the Northeast. Through such fora, he listens to personal problems of troops, even those concerning their families and instantly acts on them. No subordinates would like to disappoint a leader who exhibits such leadership empathy, mien and actions as one finds in the COAS.

Gen. Buratai treats every soldier like his personal child. He follows them to the warfront; fights with them in the trenches and offers assistance to all indiscriminately. He ensures troops are not deprived of anything, even if it means sleeping on the open corridors of the Presidential Villa to get the attention and approval of the Commander-In- Chief, President Buhari.
It is one of the secrets of Gen. Buratai’s winning formulae against Boko Haram/ISWAP terrorists, who are fruitlessly, very desperate to reverse the gains.

Buratai  is a living library of Congress on the art of asymmetric warfare and counter-terrorism. He knows the antics and how to extract his targeted results. His bag of strategies and tactics, cannot be exhausted in a single write-up. But welfare of soldiers has been a major influencer and energizer of troops for his successes as anti-terrorism Chief in Nigeria. Most importantly, an average Nigerian soldier today cares because he has a leadership that cares about him and his family.

Probably, let the rest of Nigerians ruminate about what American politician, Kirsten Gillibrand said about the Armed Forces of his country; “The brave men and women who have served – and those who continue to serve – our armed forces have selflessly sacrificed for our nation, and we owe it to them to provide the best services and protections available when they’re overseas and after they return home.”.

Otene is a humanitarian worker based in Maiduguri.