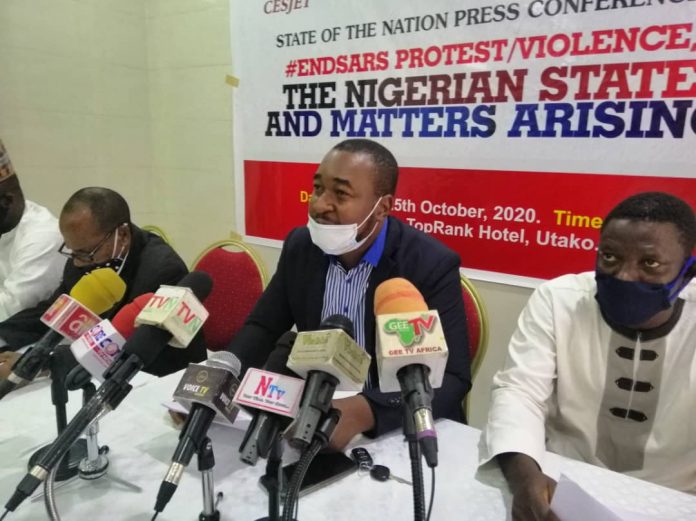 Several Nigerian celebrities have been declared culpable for the killings and arson that accompanied the EndSARS protests across the country.

The Centre for Social Justice, Equity and Transparency (CESJET) said its preliminary report on the mass action revealed that these individuals triggered the corresponding violence, looting and near anarchy that followed by peddling fake news.

CESJET made this known at a press conference on Monday in Abuja.

Unveiling the report, Executive Secretary, Comrade Isaac Ikpa said these “jaded” celebrities leveraged on the protests to chase clout and reinvent their brand.

He also hailed the Nigerian Army for exhibiting its usual professionalism amidst conspiracy from these celebrities and their allies.

The centre, however, urged the Nigerian government to petition these individuals at the International Criminal Court (ICC) starting with DJ Switch for so many avoidable death of innocent Nigerians and law enforcement personnel.

On its part, CESJET vowed to submit petitions at the Lagos Investigative Panel s well as at the ICC.

Read the  full statement below:

It has become imperative that we brief you here today so that we can express our view on the state of the nation. For the entirety of October 2020 our dear country, Nigeria has been in the grip of a vicious enemy.

The enemy we speak about is not the #EndSARS protests or the protesters, who are themselves, victims, even though they are led to erroneously believe they are in charge or that they call the shots in some sort of way. In reality, they have proven to possess lesser will than puppets and marionettes, the fall even below the level of pawns in the proper reckoning.

The enemy is the fake news that has been deployed against Nigeria as a veritable weapon of mass destruction, which the original #EndSARS protesters, as a result of their naivety allowed to almost prevail.

Amid the ongoing carnage in several cities of the country, we seem to have forgotten that although justified by long-running tradition brutality and human rights abuse by the Nigeria Police Force, the #EndSARS protests were triggered by a lie. A video circulated which was used as a basis to say that operatives of the defunct SARS summarily executed a young man and fled with his Toyota Venza car. It turned out that the young man did not die as a good Samaritan took him to the hospital for treatment; he was not shot as well but rather fell out of the car in a bid to get away from the brutal policemen. The point here is that there were people that were on the lookout for just that kind of incident as a trigger for what we are witnessing today. So, in practical terms, the #EndSARS protests are all based on a lie.

In the few days for which the protests were peaceful, there were a series of contents posted on social media and online, which later turned out to be false. These included lies that there was a harsh clampdown on protesters when in reality there was nothing of such.

Later on, the protesters began publishing the fake news that the Federal Government has sent thugs to infiltrate their ranks or to disrupt the protests. Although these were initially false, the fake news nonetheless became an invitation to thugs and hoodlums to join the protests thinking that government will pay them along the lines suggested by #EndSARS protesters.

The use of fake news by the #EndSARS protesters was matched only by their reckless and irresponsible acts of obstructing major routes too disrupt other Nigerians and make them uncomfortable. Fueled with pizza and takeaways provided with blood money they began taunting not just the government but also other Nigerians upon whom they have inflicted the maximum hardship.

The irresponsible behaviour and the use of fake news got to the climax at Lekki Toll Gate on Tuesday, October 20, 2020, as they attributed a pandemonium that broke out among them to shooting by military men. They trended pictures from movie productions and claimed those were victims from the shooting. Fake news. The shared gory pictures and videos that had no connection with Lekki and claimed they depicted people killed by soldiers. They claimed 78 protesters were killed yet almost about all of them miraculously resurrected by the time it was daybreak, including, actress, Eniola Badmus coming out refute reports of her demise.

From the independent accounts that have continued to emerge from the Lekki incident, it is apparent that the Nigerian Army is not complicit in what the protesters and their fake news promoters accuse them of.

One DJ Switch happened to Livestream the entire shooting, but her phone battery managed to die out before she could properly finish counting the 78 bodies. What a coincidence? She later ranted about how she with other protesters were throwing corpses at the foot of the soldiers while also picking up expended bullet shells that have all disappeared the following day. Someone needs to check what has happened to DJ Switch’s medication.

The Lekki Lies was made possible not just by DJ Switch alone but by the active collaboration of clout chasers and jaded celebrities who were eager to reinvent their brands. Nigerians must call them out because they share in the blame for the destructions that were carried out by people who thought there was a massacre. We appeal to Nigerians to reach these celebrities through their social media handles that they used to spread fake news about a phantom massacre of protesters.

We hope they are all happy for turning Nigerian cities into the burning pile. We hope they can still make it big in the cities whose economies they have destroyed and set back by decades.

CESJET demands that the Nigerian state the International Criminal Court (ICC) hold these celebrities starting with DJ Switch responsible for so many avoidable death of innocent Nigerians and law enforcement personnel because of their fake news drove protests. CESJET shall consequently submit petitions against these individuals at the Lagos Investigative Panel while also petitioning them at the ICC. All these celebrities and clout chasers are guilty of war crimes and punishable under the ICC convention.