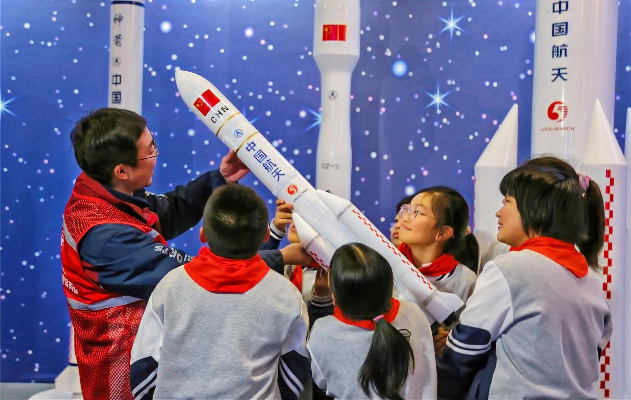 From realizing in-orbit stay to launching the Mars exploration mission, and from upgrading its launch vehicles to retrieving lunar samples with its Chang’e-5 probe, China’s space industry has entered a “fast lane” of innovative development over the recent years.
China is making solid steps toward a strong space presence. The country has witnessed leapfrog development in its aerospace technology and significant improvement in its launch capability, which indicates comprehensive breakthroughs in space science, technology and application.
Independent innovation holds the key to China’s success in aerospace. China unswervingly takes self-reliance and self-improvement efforts in science and technology as strategic support for developing its aerospace industry, and has achieved remarkable accomplishments in a series of major projects, which significantly improved its comprehensive strength in aerospace.
China’s three-step lunar exploration program of orbiting and landing, and bringing back samples wrapped up successfully. The Chang’e-4 probe made the first-ever soft landing on the moon’s uncharted side never visible from Earth, and the Chang’e-5 completed China’s first attempt to retrieve samples from an extraterrestrial body.
The construction of the country’s space station has been finished. Chinese taikonauts completed China’s first in-orbit crew rotation in the space station, which marked the beginning of the country’s long-term presence in space.
The BeiDou-3 Navigation Satellite System, a major item of infrastructure independently constructed and operated by China, was put into use. A high-resolution Earth observation system program was completed as scheduled, enabling high-spatial-resolution, high-temporal-resolution and high-spectrum-resolution earth observation.
Besides, the Tianwen-1 probe of China is the first in the world to carry out an orbiting, landing and rovering mission on Mars successfully on its maiden attempt, making China one of the most advanced countries in planetary exploration.
The application of aerospace technology mirrors China’s achievements and creates a better life.
China has widely applied satellite communication, navigation and remote sensing in the livelihood sector. The country has over 500 satellites currently in orbit and its civil space infrastructure has been constantly improved.
According to statistics, Chinese communication satellites are providing TV services for 140 million families in remote areas, and the country’s high-throughput satellites enable internet services at speeds higher than 100 megabytes at a height of over 10,000 meters.
The BeiDou system has served over seven million operational vehicles and 40,000 marine fishing boats. China’s remote sensing satellites are serving over 10,000 clients at home and over 100 foreign countries, strengthening the emergency monitoring of major natural disasters around the world.
Besides, over 2,000 aerospace technologies have been employed to serve the development of smart cities, smart energy and smart robotics, so as to better meet people’s demand for a better life.
The peaceful utilization of the space has always been a principle followed by China, and international exchange and cooperation remains a development direction of the country in its aerospace exploration.
China always upholds a vision of equality, mutual benefit, peaceful utilization, and inclusive development in the development of aerospace for the benefit of all humanity.
The China National Space Administration has built platforms to launch cooperation with overseas aerospace organizations, enterprises and research departments.
For instance, the Chang’e-4 probe carried international payloads from Germany, the Netherlands, Saudi Arabia, and Sweden, and China also worked with France and Austria during the Tianwen-1 mission. Such cooperation created opportunities for Chinese and foreign scientists to jointly explore the space, launch scientific experiments and carry out technical verification.
China has helped other developing countries boost their space science and research.
It has built satellite research and development infrastructure with countries including Egypt, Pakistan and Nigeria. Adopting an active strategy that encourages relevant enterprises to seek global development, China is one of the few countries in the world that export satellites.
It will also work with relevant countries, international organizations and its global partners for the construction of an international lunar research station.
In the next five to 10 years, China will continue carrying out lunar projects. The Chang’e-6, Chang’e-7 and Chang’e-8 missions have all been planned. Besides, the country will keep launching planetary exploration missions, such as retrieving samples from an asteroid, a Mars sample-return mission, and a Jovian system exploration mission.
Exploring the vast universe is a common dream of all humankind. It is believed that as China continues to build itself into a space power, the country will contribute more to the well-being and a better future of mankind with more achievements in space exploration and technology.