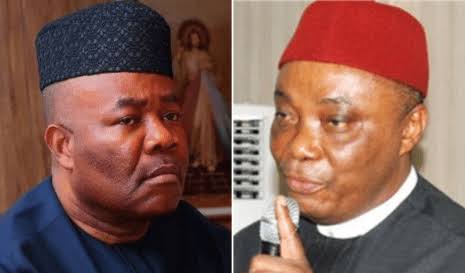 A political activist and former Deputy National Publicity Secretary of the All Progressives Congress (APC) Comrade Timi Frank, has asked President Muhammad Buhari to remove the Niger Delta Development Commission (NDDC) currently under the Niger Delta Ministry back to the Presidency.

Frank described as embarrassment allegations and counter allegations between the Senate and the Minister of Niger Delta Ministry Godswill Akpabio, over alleged missing N40 billions and other contract racketeering, saying politicians have turned the commission to a cash cow.

In a statement made available to newsmen Tuesday in Abuja, the Bayelsa born political activist said it is sad that the Economic and Financial Crimes Commission (EFCC) and other anti-graft agencies were still looking other ways despite the ongoing revelations between the Senate committee Chairman on Niger Delta Sen. Peter Nwaoboshi and the Minister, Godswill Akpabio, regarding alleged contract racketeering and looting of public funds in the commission.

Senator Nwaboshi, in a statement signed by his Media Aide, Luka Igbinoba, had accused Akpabio of looting the NDDC through contracts, adding that documents available with him clearly show that the Minister recieved N500 million contracts from the NDDC in 2017 when he served as Minority Leader of Senate.

The activist said there were also allegations that the Minister has been demanding for 30 percent kick-back from all the contractors he ordered the commission to pay, saying all these allegations must be investigated.

Frank said while majority of his people in Niger Delta are living in abject poverty, “politicians are daily running the commission like a private business against the purpose the commission was established.

“It is shamful and embarrassing to the people of Niger Delta because each day you open the pages of Newspapers the damaging reports of looting in NDDC is always conspicuously written.

“I hereby call on the government to save the region of this daily embarrassment by removing the NDDC from the control of the Niger Delta Ministry back to the Presidency and ensure that all the names mentioned in all the allegations of looting in the commission are brought to book.

“I will also call on the Minister of Niger Delta Ministry, Godswill Akpabio, to step aside for now to allow an independent probe of the commission.”

Frank called on EFCC and other anti-graft agencies to do thorough job of cleaning the NDDC of corruption and expose all those who have used their influences to enrich themselves through fake contracts and all manners of activities in the region.

Frank, however, called on all the elders and leaders of Niger Delta region to put pressure on the presidency to return the commission back to its control so as to save it from total collapse ,adding that since the commission was brought under the Ministry nothing tangible has been achieved.