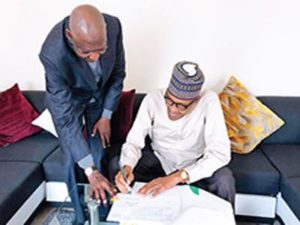 The reigning issue in Nigeria now is the signing into law on Monday of the amendment to the Deep Offshore and Inland Basin Production Sharing Contracts Act, Cap D3, Law’s of the Federation of Nigeria (LFN), 2004, by President Muhammadu Buhari from his new base in London. Top functionaries of the Buhari administration, their acolytes and those who are keen to ingratiate themselves to the administration have been jumping up and down on how the law will be a cure – all drug to the worsening economic crisis in the country.

Well, it is good for the administration to rejoice over the amendment of the law whose main purpose is to provide another source of funds for next year’s budget and the other expenses of government. However, first, it will be necessary to interrogate this rationale for this euphoria by querying why it took the administration four good years to think about amending this law.

Available and authentic record shows that the government’s first attempt to rework this legislation which it now presents as an all-important means to rebuild the economy was in December 2018, when it was submitted for consideration. This was at the height of the campaign and politicking for the 2019 general elections which was first scheduled to commence in February 2019. In fact, insider sources believe the government stumbled on this idea as a money spinner when it was broke and looking for how to fund the 2019 budget.

To support this position, it should be noted that before and after then, President Buhari himself never mentioned anything about the proposed amendment. He never articulated the importance or urgency of the bill in any of his numerous speeches, both written and off the cuff. Neither did any of his functionaries or associates who are now writing and sponsoring opinion articles in the media made any move to canvass support for the new law. One would have thought that any law considered to be so key to economic revival or increasing government revenue will be seriously discussed, pursued and talked about. The government was expected to build a public debate around it to generate interest in it and build public opinion around it. Therefore this new law represent no vision, no policy direction or ‘next level’ idea.

The points above showed that the new law, good as it is, was never something well thought out and planned as part of a larger economic recovery plan, policy or Programme. That is why the President or any of his aides or officials of the government never really mentioned it or articulated its aims and objectives before now. The obvious fact is that the new law being celebrated is a knee-jack, emergency or sudden resort in view of the government’s desperate search for new sources of funds to halt the increasing budget deficit. In fact, it was discovered as a way out of the lack of ideas on how to fund the next budget.

It should also be mentioned that in the first place, the government does not need the amendment to review the terms of the production sharing contract. It is already embedded in the old law that once oil price exceeds $20/barrel or after every five years, the contract should be reviewed to increase government earning. The review of the PSC which ought to have been done in 2004 was not done, even though a notice was given to the oil companies by the Department of Petroleum Resources (DPR) in 2007. Also, the subsequent reviews due in 2013 and 2018 were not done. This is a fault of the Ministry of Petroleum Resources and other corporations or department under it. And the Presidency kept mute. So, if the provisions of the previous law were not used for the benefit of the nation, who says the current law will be used for the same purpose. So, those who are rejoicing had better watch it. Just as the past governments were guilty in not reviewing the PSCs, so the Buhari government had been guilty for over four years.

This new law is a sudden discovery in the same vein as the closure of all land borders, apparently to check smuggling of goods into Nigeria. And as desirable as the policy could be, the purpose might have been defeated by the lack of adequate preparation for it to achieve maximum effect. As at today, smuggling is going on unimpeded across all the illegal and unauthorized, unmanned and unmarked entry points into Nigeria. Also, because the border closure policy was not well planned, there were reports that Customs Officers are the one benefitting from it as smuggling goes on, even across designated borders.

It is laughable how we close land borders and order all goods to come in through both air and sea ports when the road to our flagship seaport in Apapa remains in ruins and un-passable. Even ports infrastructure that could aid efficient delivery of service to importers remains underdeveloped and in comatose. So, a good policy has been stymied by planlessness.

Also, the desperate search for additional revenue has led to indiscriminate slamming of charges on consumables and services that are essential to the survival of the citizenry. Such sudden measure like increase in Value Added Tax, charges by banks on customers who deposit or withdraw certain amount of money, charges on use of POS machines, et cetera. These are measures aimed at raising funds without corresponding plans to increase economic activity, get more people into gainful employment, increase production, massive provision of infrastructure and introduction of effective social welfare policies.

The government and its advisers had better put on their thinking caps. They should develop properly articulated, well thought-out, holistic, visionary and durable economic policy that will make the people to remember this administration for good and for a long time. We sure do not need all these emergency, fire brigade, piece-meal approaches.

Lest I forget, the President’s decision to sign the bill while on a private visit to UK that will last two weeks is also symbolic. The symbolism of the all-powerful Chief of Staff taking the bill to London for Buhari’s assent should also not be lost on all of us. Just as the way some leaders of the All Progressives Congress (APC) unusually jumped up to praise and commend the move should be noted and properly contextualised.

Now, the private visit has become a working visit. The point has now been well-made that the President need not transmit a letter to the legislature on his absence and that his deputy should remain quiet in his position as number two man. He is no acting President.
Those who are praising the presidential assent are also communicating their endorsement of the cutting to size of the Vice President. Also, Mallam Abba Kyari has used that journey to UK to emphasize his importance. As the President is away from the country, it takes a constant liaison between him and the President for the presidency to function. There is no need for a third party. Government functionaries and other individuals who want the President’s attention know who to see and where to go. And this is okay for APC leaders who want to be in Buhari and Mallam Abba Kyari’s good books.
There is politics in every economic decision, no matter how minute. Anyway, the points are well noted.

Frank, a political activist, is also a former deputy spokesman of the ruling APC