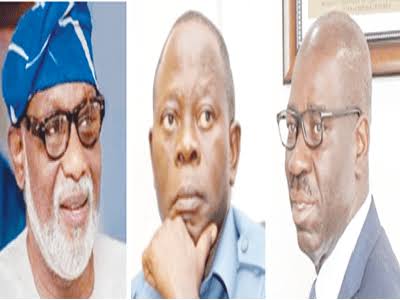 The governors of the All Progressives Congress (APC) have met and agreed to intervene in the current crisis rocking the party in Edo and Ondo states ahead of the governorship elections the state.

A statement made available to newsmen Sunday in Abuja and signed by the chairman of the Progressive Governors Forum (PGF) and governor of Kebbi state, Atiku Bagudu, said the governors have “Collectively agreed to work to ensure strengthening fair and democratic internal party mechanism for the selection of party candidates in all elections, especially in respect of Edo and Ondo states 2020 Governorship elections.”

The National Working Committee (NWC) of APC on Saturday affirmed the disqualification of the Edo state governor, Godwin Obaseki and two others who had earlier disqualified by the screening panel.

By the APC governors in the statement said they are confident that the party will resolve all current challenges and emerge stronger emerge stronger.

The APC governors forum which had a Teleconference meeting on Saturday resolved that “Unanimously reaffirmed the commitment of all Progressive Governors to work for the unity of our party.

Aside the statement issued after the meeting, a source closed to one of the governors who attended the meeting said most of the AP governors were not happy about some of the decisions taken so far by the Comrade Adams Oshiomhole-led NWC.

The source said: “I know there are several engagements still going on to resolve some of the controversial steps taken by the APC NWC. We might like see reversal of some of these decisions because the feelings is that NWC does not have power to do some of the things they did regarding Edo. So, they governors are still engaging with all the concern stakeholders,” the source revealed.