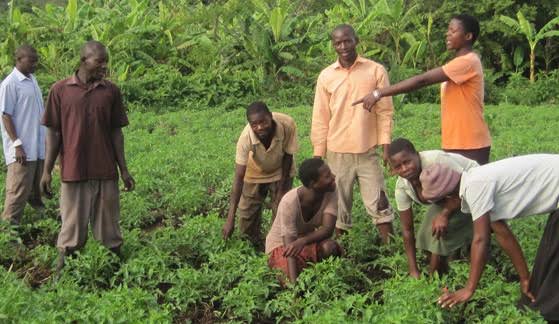 The federal government through the newly resusitated National Agricultural Land Development Authority (NALDA) has revealed plan to raise about 77, 400 young farmers into Nigerian farming business across the nation in different farming activities ranging from crop farming to animal husbandry.

The newly appointed Executive Secretary of NALDA Prince Paul Ikonne, said this Monday in Abuja at the maiden press briefing since President Muhammadu Buhari brought the agency back.

Speaking at the media conference, Prince Ikonne said his plan is to ensure that the organisation drive the country’s economy.

“Our short-term programs are; Providing farm inputs such as improved seeds, fertilizers, machinery, environmentally friendly crop protection agents, growth enhancers and trainings which will be given to already existing farmers and this will assist them during this farming season in order to improve their yield.

“The President, having given a marching order when he said “we must produce what we have to eat” NALDA as an authority under the Presidency has come up with programs in order to meet this directive by Mr. President.”

Speaking on how to achieve his plans, Ikonne said: “We intend to have 77,400 young farmers injected into Nigerian farming business across the nation in different farming activities ranging from crop farming to animal husbandry.

“These young farmers will be drawn from the 774 Local Governments, with a pilot number of 100 per local Government. In this initiative we will partner with Governors for provision or donation of land and other stakeholders as this will create employment and food production will be increased.

“Back To Farm; we will use this program to encourage everyone to go back to farm by reaching out to the military and paramilitary organizations, NASS members, civil and public servants, journalists, corporate bodies, religious organizations and individuals.

“You will agree with me that all these organizations mentioned and some individuals have land that are not being put to use, so we intend to encourage them to use these lands for farming even if it is for personal consumption. #BackToFarm

“These 3 programs are our starting point in order to meet the immediate mandate of Mr. President for providing food for all and we intend to achieve this within the next 6 months.”

While expressing confidence in the organisation to drive economy, the executive secretary said: “Our intention going by NALDA’s mandate, is to make agriculture a business and a source of wealth creation for the country. This we intend to achieve by increasing palm oil and soya beans production for export among others. Nigeria’s potential in the agricultural sector cannot be over emphasized and having identified the lapses of why we as a nation have not attained the height of food sufficiency, NALDA under my watch will provide the required leadership and with the support of Mr. President we will achieve our mandate.

“NALDA will partner and collaborate with other government agencies and international organizations in order to attain food sufficiency and make agriculture the main source of revenue for Nigeria from export.”

He, however, called on Nigerians who are interested in working with NALDA as volunteers to register through its website www.nalda.ng, even as he called “on all Nigerians and stakeholders, to see agriculture as a business and to solicit for their support as we take off today towards achieving food security which NALDA will be driving.”

Speaking earlier, the nalda’s pioneer director of planning, satistics and data bank, Dr. Akin Fapounda, who gave review of where the organisation was before it was disbanded in year 2000, commended President Muhammad Buhari for bringing the Authority back to existence.

“It is nice to see NALDA back to the country.”

Dr. Fapounda said if Nigeria will succeed, NALDA must succeed in agriculture.

He said NALDA is not meant to be a federal government agency but for state government to look for lands, settle all compensation and use the land for proper farming.