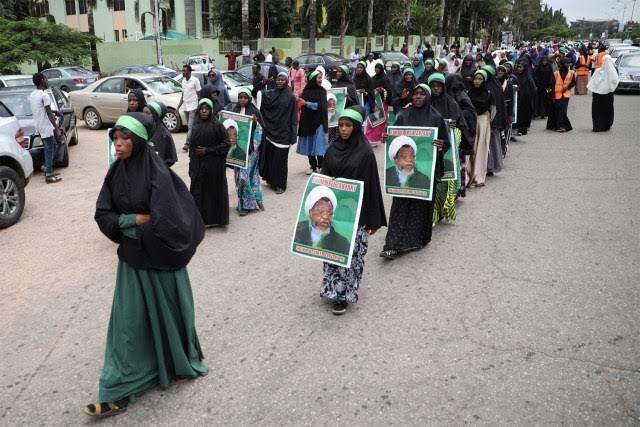 A group of lawyers, under the aegis of Lawyers United for Justice, Peace and Development (LUJPD) has disowned Justice Hajaratu Gwadah following her judgement which discharged and acquitted 91 members of the Islamic Movement of Nigeria.

The legal practitioners said the Justice of the Kaduna State High Court isn’t one of them but a member of the radical Iran-backed sect and therefore rejected the ruling as “disgraceful” and “shocking”.

Speaking on behalf of the group at a press conference on Saturday, National Coordinator, Barrister Cletus Onwu wondered why a presiding Judge would hold that the prosecution did not prove its case beyond reasonable doubt.

LUJPD, therefore, vowed to monitor proceedings in the appeal to be filed days ahead by the Kaduna State Government against the judgment.

The group enjoined Nigerians to join and push for sanction against Justice Gwadah.

Gentlemen of the press, many of you must have followed the recent Kaduna High Court judgement which discharged and acquitted 91 members of the Islamic Movement of Nigeria (IMN). The Lawyers United for Justice, Peace and Development finds this judgement disgraceful, shocking and mockery of all that the judicial institution in Nigeria represents.

There are clear indications that Justice Gwadah is bias in her judgment and belongs to the terrorist organization, considering the manner she dispensed with the case at its preliminary stage. The Director of Public Prosecution who led the legal team for Kaduna State Government, Daris Bayero was able to call a total of 31 witnesses, including senior military officers who gave the court a vivid account of what happened to them on that fateful day.

In addition, the prosecution presented over 105 exhibits that were cleared and legally admitted by the court. We wonder why a sane Presiding Judge who swore by the Constitution of the Federal Republic of Nigeria to do justice to all manner of persons without fear or favour would hold that the prosecution did not prove its case beyond reasonable doubt. How can she hold that the prosecution did not present any legally admissible evidence before the court? What could be more considered as legally admissible evidence outside 31 witnesses and 105 exhibits?

The purported report of a “No Case Submission” in criminal proceedings is to test whether or not a prima facie case has been established for the accused persons to answer or defend. The procedure is preliminary in nature as far as our criminal law jurisprudence is concerned. It therefore does not give room for Justice Gwadah to make such pronouncement as “the prosecution did not prove its case beyond reasonable doubt”. The issue of whether or not the prosecution has proven its case beyond reasonable doubt is only due for consideration at the end of the whole trial when the accused persons would have completely closed their defence.

We vividly recall that fateful Saturday, 12th December, 2015, the Chief of Army Staff, Lt. Gen. Turkur Buratai together with his entourage was heading to pay homage to the Emir of Zazzau before proceeding to attend the passing out parade of 73 Regular Recruits at the Nigerian Army Depot, Zaria. Unfortunately, violent and heavily armed members of the IMN otherwise known as Shiites barricaded the Kaduna-Zaria Highway in an attempt to assassinate the Chief of Army Staff. The assassination plot was eventually foiled in a manner that was described by many eyewitnesses as divine. This led to the arrest, detention and subsequent prosecution of several members of the IMN alongside their leader, Sheikh Ibraheem El-Zakzaky and his wife.

The Lawyers United for Justice, Peace and Development will, therefore, monitor proceedings in the appeal to be filed days ahead by the Kaduna State Government against the judgment. As Ministers in the Temple of Justice, lawyers are meant to be vigilant and speak against whatever thing that is inimical to the security of Nigeria. LUJPD will mobilize ahead of time to monitor the case which is perceived to be erroneous on point of law when an appeal is lodged at the Court of Appeal.

We shall give necessary support to the Kaduna State Government as well as the Federal Government as they strive consistently to tame the terror group called Islamic Movement in Nigeria. We are convinced that if the 91 members of MNI are not innocent but were discharged based on personal interest, the Court of Appeal in its wisdom will do all that is within the ambit of our laws to upturn the judgment of Justice Gwadah.

Nigerians should join us to reject the said judgment and push for sanction against Justice Gwadah before the Kaduna State Judicial Commission for being bias. If she does not tow the path of transparency, justice and equity in handling all other IMN related cases pending in her court, then she has to be shown the way out of the Kaduna State Judiciary.