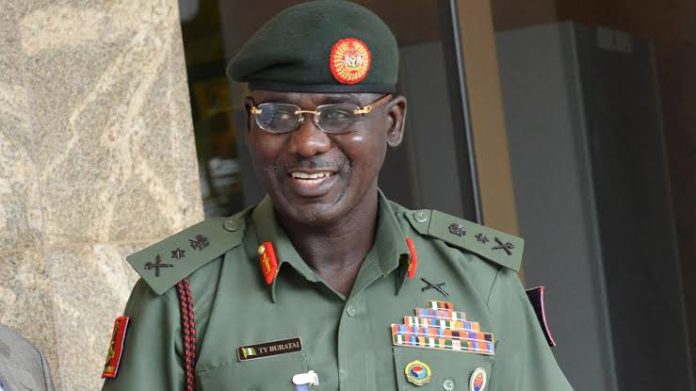 Henchman of the counter-insurgency operations in Nigeria and the Chief of Army Staff (COAS) Lt. Gen. Tukur Yusufu Buratai is a household name in Nigeria. Any time his identity is echoed, it reverberates with an uncommon fondness of millions of his fans.

He strikes the psyche of people in different ways. To the average Nigerian soldier, he is the best and ideal leader or boss they have ever had in recent time. He has a charming and infectious aura. He is simple, humble, amiable and hardworking. Gen. Buratai is patriotic and loyal to a fault. He is an Army General who cherishes and rewards hard work, but loathes indolence and recalcitrance.

To the Boko Haram and ISWAP terrorists, Gen. Buratai is their adversary; a tormentor, a nightmare and a fiend. And so, many times, insurgents ambushed this terrible foe and attempted to sniff life out of him. But as usual, Gen. Buratai dealt them a hard blow. He matched them with superior force. Many sprawled into their early graves, but Gen. Buratai emerged unscathed.

The international community perceives Gen. Buratai as an enigma and an indomitable hero. The Republic of Brazil sighted his military prowess and exploits especially against Boko Haram terrorists as far back as 2017. He was feted with the Brazilian Military Order of Merit, the country’s highest military honor. The wordings which accompanied the award were explicit that Gen. Buratai has earned such foreign and dignified honor for his contribution to blighting the raging fires of terrorism in Nigeria, and an ambassador of global peace and security.

To the Nigerian media, Gen. Buratai is a beautiful bride, who is courted 24 hours a day, as they seek to illuminate the Nigerian people over counter-terrorism operations. From Gen. Buratai’s countless flock of admirers, the media celebrates him more as a courageous soldier, astute administrator, a reformer, innovator and great patriot in the Nigerian project.

The media celebrates Gen. Buratai as one Army Chief who has carved a niche for himself as a strategist, tactician and goal-getter. Different media houses in Nigeria have recognized Gen. Buratai as a leader who doesn’t get tired of innovations; a leader who is never tired of repressing and winning the war on insurgents.

Very often, the media writes the most captivating articles in eulogies of the Army boss as a leader who is never tired of giving his best. The COAS is adored as a leader who met an unprofessional and irresponsible Army, but restructured it into a professional, responsible and responsive Army, actively alive to its constitutional responsibilities of safeguarding the territorial integrity and sovereignty of Nigeria.

Therefore, in the last few months, an appreciative media and highly rated institutions have feted Gen. Buratai with awards. And to underscore the genuineness of the awards, each one of them dwells on the same thematic preoccupation. It locates that essential and shining quality in Gen. Buratai as the invincible emperor of the counter-insurgency operations in Nigeria. And the awards keep streaming in his honor ceaselessly.

The Society Watch Magazine celebrated Gen. Buratai as the “Most Outstanding Chief of Army Staff” for the incredible progress he has recorded against Boko Haram terrorists and armed bandits in the country. It expatiated that Gen. Buratai is so honoured because he has chased remnants of insurgents and confined them to the fringes of the Northeast; ensured peace for the return of IDPs, and reopened roads and streets in the region which were hitherto closed because of heightened insecurity.

To the Daily Asset newspaper, Gen. Buratai is its Year 2020 “Man Of The Year,” on the security plank. At a conferment ceremony in Abuja, the newspaper pointedly stated the COAS has staged out excellently “for transforming the Nigerian Army to one of the very best on the African continent.”

The Oil and Solid Mineral Producing Area Landlords’ Association of Nigeria (OMPALAN) also registered their appreciation for Gen. Buratai. They decorated him with the award of“Protector of the Environment,” as its President,Bishop Udo Azogu, endearingly said, “…we share a common ground with the Nigerian army in its uncompromising defence of the unity and sovereignty of Nigeria.”

Furthermore, the Wildlife Society of Nigeria also honoured Gen. Buratai as “Fellow Wildlife Society of Nigeria Honour’s Award” for leading the impacts Nigeria has recorded on insurgencies and insurrections. There are a dozen of such awards which Gen. Buratai has bagged to his credit and those who have seen his impactful actions will understand why the Army boss is the most celebrated COAS.

The awards keep coming to Gen. Buratai because he is a leader who gives his best in all circumstances. The Army boss is a leader who gets targeted results and a leader who gets the job done no matter the obstacles. When he promised Nigerians in July 2015 that the Army will decimate and defeat Boko Haram terrorists, he accomplished it by December of the same year.

When Gen. Buratai vowed to reclaim all the 17 local government areas seized by Boko Haram terrorists in the Northeast, he delivered them to the natives and Nigeria within record time. And similarly, he told Nigerians that he will demystify and dismantle Sambisa forest, Boko Haram’s most secured protective fortress, he delivered it to Nigerians as Christmas gift in December 2016.

Gen. Buratai has promised to completely eliminate Boko Haram /ISWAP terrorists and he is working assiduously with troops to give Nigerians the final peace and security on terrorism. He is a soldier and leader, who keeps his words sacrosanct. That is why the awards still keep coming in his honour.

Longpet wrote this piece from University of Brighton, United Kingdim.