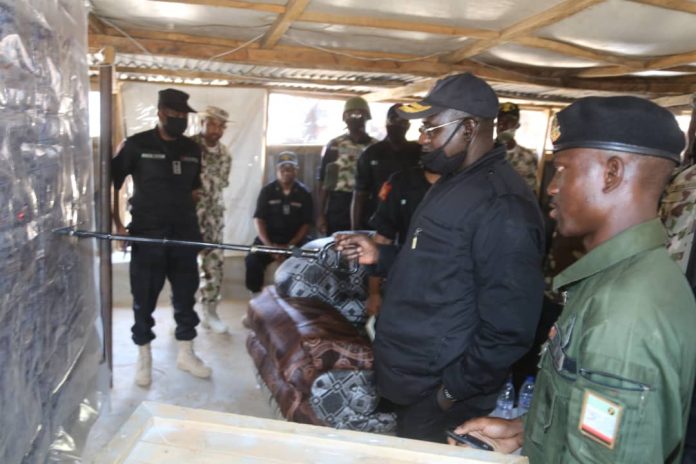 Assessing a phenomenon comprehensively at every point and dimension of history is quite difficult. It is impossible to get an accurately wholistic picture of any occurrence, so long as different people are involved in appraising it.

And philosophers have profoundly argued that the preceptory senses of all human beings do not function on same polar in exactitude. The sense of interpretation of reality by humanity functions in dissimilar patterns. What is often adopted as the confluence point is the preponderance of a baseline.

The Military like any other profession religiously relies on loyalty and the patriotism of those who operate under its temple. It means, everyone of them professes to its etiquettes and decrees regarded as sacrosanct. Where there is a betrayal or violation of the institutional oath or its operational creeds, the organization or institution becomes endangered in many facets.

The military subscribes to total obedience, professionalism, loyalty and patriotism in the discharge of its constitutionally defined responsibilities. It is central to the operations of the Military. That’s why acts of insubordination in the Military is ruthlessly handled and with all seriousness.

Many Nigerians have no inkling about the reasons responsible for the ravaging and festering of Boko Haram terrorism in the country which constituted a nationally perpetual source of agonies. What most people knew was the simplistic understanding that Boko Haram killed, abducted, committed acts of arson, and raped married women and teenage girls because they were mightier.

Even the critically-minded never bothered to deeply reflect on the menace of terrorism in Nigeria; its entrenched tentacles or fortress in the Nigeria’s neighbouring countries such as Chad, Niger and the Cameroun republics. What was frequently bandied in public domain was that Boko Haram factional leader and his top commanders were all powerful and had Nigeria on their palms, which they caress mindlessly in violent destructions or bloodbath.

To these minds, the Nigerian military, and in particular, the Nigerian Army was at best, a bunch of effeminate assemblage of men and women, who fed robustly on state resources, without justifying it in actions on the battlefield. Nigerian soldiers were ridiculed as an Army which could not fight a less trained ragtag army such as Boko Haram. People defamed our soldiers as weaklings and disingenuous in warfare, the reason for their existence.

But a plethora of factors accounted for the lackluster performance of the Nigerian Army before President Muhammadu Buhari was ordained leader of Nigeria. Thereafter, he appointed Lt. Gen. Tukur Yusufu Buratai as the Chief of Staff (COAS; an appointment he added an additional mandate as leader of the counter-insurgency operations in Nigeria.

An avalanche of reasons fired the glaring incompetency of soldiers in courageously and victoriously facing the Boko Haram insurgency in the preceding administration. Some people are aware of this water-tight fact and the masterminds are not in the dark too. But it is not everything on security that ought to be naked in public space.

Even a blindman discerned the lack of patriotism and loyalty of the Army to their Commander-in-Chief and other senior leaders of the time. Soldiers of the era were not even patriotic to their country. It was not questionable that they regaled in this unpatriotic act for suspected vicarious benefits.

Of course, when Nigerians persistently heard stories about instigated mutiny in the frontlines and soldiers shirking in the heat of battle before enemy forces, it only expressed the extent of degeneration in the Army as an institution. It was not surprising they failed to achieve any tangible results in the counter-terrorism combats.

And there was no option because the Army of the time was perilously populated by spies and betrayers of the country in favour of enemy forces. Secret information leaked easily and tales of ambushes were rampant. Several unpleasant and unprofessional acts occurred behind the scenes at the theatre of war and no one was apologetic about it.

But a knowledgeable and astute soldier, Gen. Buratai understood all the minutiae and challenges. It explains why he focused his initial days as the Army’s Chief helmsman to reposition the Army into a professional institution, responsible, responsive, loyal and patriotic in the discharge of their constitutional mandates.

With the right clan of comrades, adequately prepared for the task, Gen. Buratai has effectively utilized soldiers in the positive service of Nigeria. Today, Nigerians are seeing an Army which is ready to die on the battlefield in defence of their country than allow terrorists of whatever hue feast on blood of Nigerians.

Whichever direction the pendulum swings, one can say, it is Gen. Buratai or Nigerian Army. Or, whether option ‘A ‘or ‘B’ and even both, the destination is the same in the service of the nation in the Army of today.

Everyone can attest that their sacrifices have guaranteed them a prestigious place in history. Under the Buhari Presidency, the Nigerian Army has surpassed expectations and even those who shy away from confessing it publicly, exclaim it in privacy. It has handled the insurgency decisively and these deeds have not gone unnoticed.

But as usual, a lot of Nigerians only identify and align the perfection of Gen. Buratai and the Nigerian Army to the counter-insurgency and other Internal Security (IS) operations. But that’s the lacuna in human perception earlier hinted. The truth is that the Nigerian Army is also famed endearingly in handling other issues bordering on security in Nigeria outside terrorism. A Nigeria without an Army would have gone extinct by now.

Soldiers have been the rescuers and saving grace of Nigeria on many precarious public security threats. Normally, the Presidency issues the orders for the deployment of the Army over security issues that have overwhelmed civil security. And each of the interventions of soldiers on Internal Security has resolved the problem quietly in favour of Nigeria’s peace and security.

And manifold examples are handy. No Nigerian will dispute that Nigeria’s eighth democratic republic would have been an illusion if not because of the intervention of the Nigerian Army. The country’s politicians who are badged perpetually as power monks ganged-up to forcefully wrest power from the incumbent who was re-contesting for second term and the popular choice of Nigerian masses.

There were flyers from meetings in their secret shrines, especially by some opposition elements that the 2019 elections should be bloodily rigged in their favour. Political thugs and election riggers were empowered to execute the job. It was scary and disturbing.

President Buhari got wind of it. He acted on intelligence reports immediately in national interest, by deploying Nigerian Army to complement civil security in the 2019 electoral exercise. Soldiers saved the day, as there were attempts of violence, but the initiators were not given a chance to carry out the evil by the Army.

All two segments of national elections were conducted with near zero level of violence and bloodbath. The professionalism and neutrality of the Nigerian Army in the exercise is applauded to date.

Those enjoying the success of that election and the stability of Nigeria’s transition from democracy to democratic government, least remember that Gen. Buratai and soldiers laid a smooth bed for them, by acting as defence bulwarks. The plotters were stopped and failed woefully to accomplish the deadly plots of violently disrupting the elections at the detriment of the lives of Nigerians.

Likewise, in the face of the ravaging deadly Covid-19 pandemic in Nigeria, measures to control its spread in the country were brazenly abused by Nigerians. Civil security drafted to enforce lockdown and restriction of movements, with the imposition of stay-at-home order by the Presidency, undeniably compromised the process by assisting the populace to flout the order to imperil public health

Again, only Nigerian soldiers deployed to parts of Nigeria to enforce the stay-at-home order that has lessened the impact of Covid-19 spread in Nigeria. Or else, the country would have been in the hottest furnace of another national problem, recording thousands of infections and deaths daily.

Gen. Buratai has proved in this instance too, that the Nigerian Army is after public good. But how many Nigerians ever genuinely sit back and reflect on these to say, “thank you” to the Nigerian Army and Gen. Buratai? Therefore, it is not baffling when knowledge of Gen. Buratai or Nigerian Army’s messianic roles in service and protection of the nation is narrowed down to only Boko Haram.

It is amazing that people only talk about Buratai’s heroism on terrorism combats and forgetting the other equally very sensitive areas where the Army has come first and stainless in the course of interventions. Has anybody ever cared to know what Niger Delta militancy, armed banditry and cattle rustling would have done to Nigeria without the Army?

And what ethno-religious crisis, herdsmen/farmers inferno, violent separatists agitations, and communal clashes would have done to the challenges of insecurities in Nigeria had the Army been unresponsive? Gen. Buratai and the Nigerian Army’s patriotism have indisputably earned them a colorfully prestigious place in the nation’s Hall of fame. The day of a formal festivity in celebration of these great heroes and heroines would certainly come.

Odoma wrote this piece from Abuja,