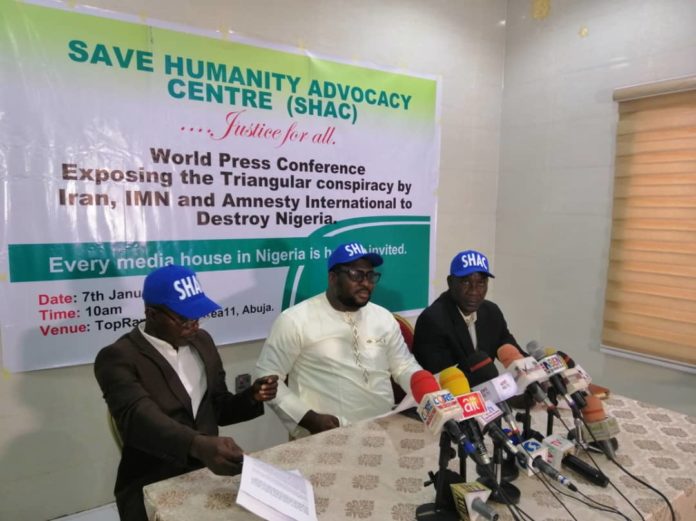 The Save Humanity Advocacy Centre (SHAC) has alleged an alliance between the Iranian government and Amnesty International to cause unrest in the country.

According to the group, Iran-backed Islamic Movement of Nigeria (IMN) is the tool being used, evident in the various protests and marches, by some disgruntled politicians and groups on the sponsorship of IMN.

The SHAC made this known at a press conference on Friday in Abuja, raising an alarm on Iran’s renewed bid to overthrow Nigeria’s democratically elected government.

In his address, Executive Secretary, Ibrahim Abubakar said fuelling crimes and cooking reports portraying the government to have failed is Iran and IMN’s latest gimmick.

To achieve this, Mr Abubakar added that Iran lured some self-proclaimed international non-governmental organisations to do its dirty job, with Amnesty International leading the bunch.

The Save Humanity Advocacy Centre, therefore, urged the world to pay attention to the ongoing plans by the IMN to overthrow the government and plunge Nigeria into war aided by its romance with Amnesty International and Iran.

The Save Humanity Advocacy Centre (SHAC) has become aware of the escalation of activities aimed at destabilizing the government by the Islamic Movement in Nigeria (IMN). You must have observed that in recent days the group has continued to embark on provocative street protests and marches even when they have no right to this as a known terrorist group.

These protests are deliberately orchestrated to put the nation’s military and security organizations in bad light by creating the erroneous impression of disproportionate crack down on their members by the state. A manifestation of this is the constant claims of casualty from their protests.

The latest approach by the IMN now is to fuel crimes and then manufacture reports that claim the government is failing on account of rising crimes. A clear instance of this strategy in play is the report by SBM Intelligence titled “Rising Insecurity in Abuja” which sought to create the impression that the nation’s capital has succumbed to insecurity and that the government must be illegitimately sacked in this regard.

We are worried that the spate of crimes that had rocked some parts of the country were not unconnected with IMN’s quest to create an atmosphere of fear across the land while also raising funds from such criminal enterprises to pursue their terrorist agenda. The fact that they can now start touting Abuja, the nation’s capital as insecure speaks volume to what they had done in the past in other parts of the country and the evil they plan to unleash on the entire country.

Not to be overlooked are the partners that have worked with IMN to undermine Nigeria’s integrity. We have identified their international NGO partner, Amnesty International (AI), which has done everything possible to paint a Nigeria as a repressive state just so its client, IMN can continue to oppress and terrorize Nigerians unchallenged. We had in the past had cause to raise alarm over the unholy alliance between Amnesty International and IMN. What we have discovered is that AI has resorted to circumventing the credibility crisis our expose has brought upon it; this is being done by packaging its report and handing over to entities like SBM Intelligence to issue.

Unfortunately for this failed alliance, the patter of AI’s reporting, which dwells largely on hyperventilating on falsehood and half-truths is glaring to trace. The justification of crimes committed by IMN while making their false flag operations appear like random crimes are telltale markings of IMN-AI modus operandi, standard operating procedures that the discerning have become accustomed to seeing whenever resources have been deployed to undermine Nigeria’s interest.

The world must also be alerted that the hand of the Islamic Republic of Iran continues to move these puppets. The incentive for Iran is nothing other than its threat to deal with Nigeria for not dropping the legal process against the leader of IMN, Sheik Ibraheem El-Zakzaky, who is standing trial in Kaduna state. This escalation by the world’s major state sponsor of terror is after it had unleashed the series of protests and uprising against the Buhari administration.

Iran has earmarked a huge sum of money for this round of onslaught against Nigeria. We understand that the financing is drawn from a $5million that it first committed to this evil agenda as far back as 2018, which some CSOs and political parties have been assessing in the last few weeks. Let the world note that this fund is not for any capital investment but to destabilize the peace of Nigeria.

The Save Humanity Advocacy Centre (SHAC) is therefore drawing the attention of the world to ongoing plans by the IMN to overthrow the government and plunge Nigeria into war with the active collusion and participation of Amnesty International and Iran.

It is therefore imperative to remind Nigerians that they hold the power to tell IMN, AI and Iran off with strict warning that they should not truncate the peace of Nigeria with their extremist ideology. The government has done much to restore peace and prosperity to Nigerians so this axis of evil should not destabilize the country for whatever reason.