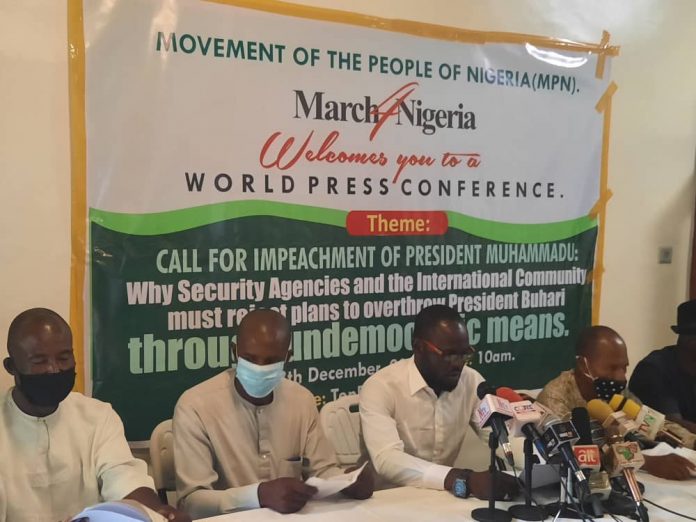 The March4Nigeria Movement has raised an alarm over a deliberate plot by the National Assembly and the Peoples Democratic Party (PDP) to truncate the country’s democracy by forcing a regime change.

The group called the attention of security agents, well-meaning Nigerians and the world at large to a planned coup by these “disparate elements in Nigeria and their external collaborators”.

Speaking at a press conference on Tuesday in Abuja, National Coordinator, Richard Augustine- Adie, said the new tactics is to demand President Muhammadu Buhari’s resignation or face impeachment over conditions that they helped precipitate.

According to the group, among previous failed schemes by the opposition and their allies include promoting widespread insecurity, hijacking the EndSARS protests and sponsoring secessionist.

Mr Augustine-Adie said that Nigerians shouldn’t be surprised as the PDP’s presidential candidate had threatened to render the country ungovernable if he does not win the election.

The March4Nigeria Movement further warned of a plot to cause ethno-sectarian strife in the coming days targeted at the Armed Forces having failed to use the National Assembly to fraudulently sack the government.

The group, however, the challenged the Federal Government, the Armed Forces, and Police to be at alert to their responsibilities and not to allow anyone or group of persons to jeopardize our democracy.

Augustine-Adie added that they should wake up to the antics of these sore losers and not view the revived #EndSARS protests as mere agitation but should treat them as part of the coup plotters.

The group also urged Nigerians not to lend themselves out as tools for those seeking to foment trouble, noting that the #EndSARS protests have since devolved into #March4Nigeria.

In recent days, we have observed a change in tactics by those that have been hell-bent on undermining the integrity of Nigeria.

This change in tactics manifested as a surreptitious call for President Muhammadu Buhari to resign or to be impeached over conditions that they helped precipitate.
Note that the reasons they are adducing for the so-called impeachment hover around insecurity and economic hardship.

Interestingly, the opposition People’s Democratic Party (PDP) is at the forefront of the impeachment farce.

The PDP Caucus of the House of Representatives tabled this ill-advised demand before the Green Chamber, but we thank God that there are still voices of reason in Parliament, which have rejected the warped demand.

We recall correctly that the PDP’s candidate in the 2019 Presidential Elections, Alhaji Atiku Abubakar, had threatened that the country will be rendered ungovernable if he does not win the election.

Some groups had raised the alarm when the PDP made this threat then without many Nigerians paying heed. At that time, it was revealed how the opposition had perfected plans to hire foreign mercenaries to unleash violence in parts of the country and this is what we are increasingly seeing with the kidnappers and bandits spilling over from Mali, Niger and other nations whose nationals appear similar to Nigerians.

We have also seen signs of the then reported plot to use mob action or an Arab Spring styled protests to cause chaos and force the government out of office. The other option they mulled at that time was to cause a leadership change in the military and then encourage junior military officers to stage a coup citing the protests as a basis to truncate the nation’s democracy.

Gentlemen of the press, what we are witnessing today is the rolling of all the approaches into one and executing as a single killer plan. They have caused widespread insecurity, including leveraging political variables to cause the deaths of dozens of rice farmers at the hands of Boko Haram. They have hijacked what was once known as #EndSARS protests to use against the government as opposed to the original intention of demanding police reforms.

These same people are now sounding strident as they demand that there must be changes in military leadership.
We are concerned that they are now back to mobilizing Nigerians to go back on the streets to stage violent protests while the fallout of the hijacked #EndSARS protests is still being managed. The entire country is smarting from the damage done by the violent people that were mobilized to the streets to commit arson, prison breaks and murder.

These criminal attempts on the stability of Nigeria are being boosted with fake news and manipulated contents that have done much to create confusion in the mind of the people. The next few days will prove pivotal as operatives acting on the instruction of the opposition have perfected plans to launch a blitz of fake news that will make Nigerians question the future of their country and the competence of their leaders. The objective of this blitz is to make people join the revived #EndSARS protest out of misdirected anger.

There is further a plot to cause ethno-sectarian strife on a scale that law enforcement would have challenges bringing under control. Their major targets in the days ahead are the Armed Forces, which they plan to bring down by overwhelming it with crises that it cannot fully bring under control. Towards this, meetings were held in Lagos by a former president and some ethnic warlords and these strategies were discussed.

This round of #EndSARS protests, like the hijacked phases of the protests in the past, is being sponsored and promoted by losers in the last presidential elections, who want to force a regime change.

Part of the plans is to cause widespread clashes with security personnel on a scale that will cause mayhem that will result in the overthrow of the government. We have this on good authority.
Now that the attempt to use the National Assembly to fraudulently sack the government has failed, the next salvo is the efforts to infiltrate the Armed Forces of Nigeria in the hope of overthrowing the democratically elected Federal Government and then justify this by claiming that the government was going to order a devastating clampdown on protesters.

March4Nigeria consequently wants to challenge the Federal Government, the Armed Forces of the Federal Republic of Nigeria, and the Nigeria Police to be at alert to their responsibilities and not to allow anyone or group of persons to jeopardize our democracy. They should wake up to the antics of these sore losers and not view the revived #EndSARS protests as mere agitation but should treat them as part of the coup plot that they are.

The Department of State Services (DSS) should rise to the challenge at hand by getting to the root of the mutated #EndSARS movement by tracing the finances and communication that is driving the attempt to visit instability on Nigeria.  DSS should invite the key players of the protest for meetings to tell Nigerians all they intend to achieve that cannot wait for the 2023 General Elections.

EFCC and ICPC as anti-graft agencies should trace the illicit financial flow that was deployed as Christmas bonanza to lawmakers that have been compromised to breach the rules in the hope of forcing an impeachment that does not conform with the rules.

We warn those making contacts with the military, whether from among protesters or from the opposition, to desist from doing this forthwith. The military should be continually treated as the sacred institution that it is and not dragged into opposition politics.

We equally renew an earlier appeal to Nigerians not to lend themselves out as tools for those seeking to foment trouble. The #EndSARS protests had since devolved into #March4Nigeria Movement, which is a coalition of Nigerians that are committed to constructively engage government at all levels in a manner that produces a result as opposed to the kind of destructive looting that undermined the efforts to hold members of the police force to account