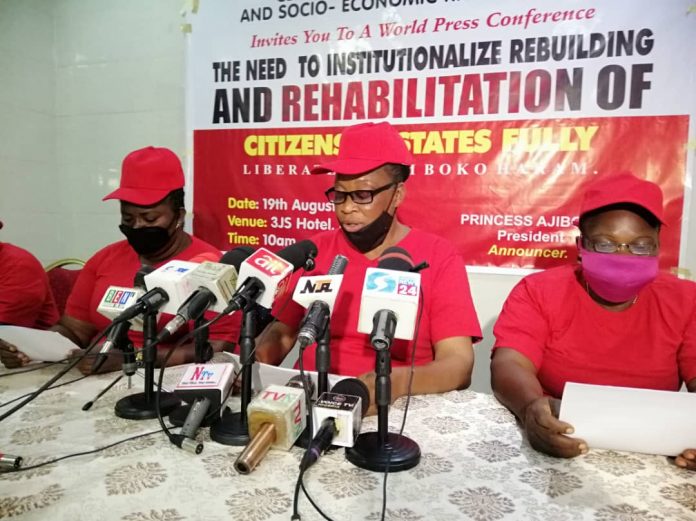 The Centre for African Liberation and Socio-Economic Rights (CALSER) has hailed President Muhammadu Buhari for liberating five states in the northeast from Boko Haram terrorists.

CALSER, however, charged the Federal Government to begin rebuilding and rehabilitation efforts in these states to avoid a resurgence.

Speaking at a press conference on Wednesday in Abuja, CALSER’s president, Princess Ajibola said the military has indeed lived up to expectations by stamping out terrorists from Yobe, Adamawa, Bauchi, Gombe and Taraba states.

“We wish to use this medium to commend President Muhammadu Buhari for matching his words with action by providing that political will needed to liberate North-East Nigeria from the shackles of terrorism,” Ajibola said.

“The Centre for Africa Liberation and Socio-Economic Rights also commends other critical stakeholders that contributed immensely towards the liberation of the five North Eastern States from the threats posed by the Boko Haram insurgent group”.

“The Centre for Africa Liberation and Socio-Economic Liberation wishes to put on record that indeed the efforts of the Nigerian government at rebuilding and relocating those displaced as a result of the crisis must begin as a matter of urgency in our journey towards the restoration of normalcy in the communities liberated by the Nigerian Army,” Ajibola said.

“If this is not done, we stand the risk of the Boko Haram group taking advantage to infiltrate these communities from where they would continue their nefarious activities against the Nigerian state.

“The Centre for Africa Liberation and Socio-Economic Rights also task all International Non-Governmental Organizations operating in North-East Nigeria to render humanitarian assistance to returnees to their communities.

“The task is also before other international partners, as well as the critical group of Nigerians in the Diaspora to use their network to attract the much-needed assistance to the people in the bid to return to their normal lives and restore their human dignity by engaging in agricultural and other useful ventures.

“The Centre for Africa Liberation and Socio-Economic Rights acknowledges and appreciates the efforts of these humanitarian organizations over the years in through their activities that has indeed put smiles on the faces of displaced people and victims of the Boko Haram terrorism.

“The North East Development Commission must also rise to the occasion to fulfil its mandate of assessing, coordinating, harmonizing and reporting on all intervention programs, and initiatives of the Federal Government or any of its Ministries, Departments and Agencies (MDAs), States; and other Development Partners and for the implementation of all programs and initiatives for the North East states; Adamawa, Bauchi, Borno, Gombe, Taraba, Yobe, respectively.”