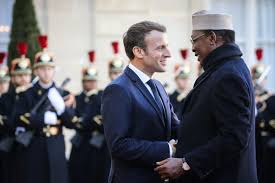 The Coalition Against Terrorism and Extremism (CATE) has warned France that its sabotage and sponsorship of Boko Haram/ISWAP activities in Nigeria poses a threat to the country’s sovereignty.

CATE made this known in an open letter signed by its National Co-ordinator, Gabriel Onoja, on Monday and addressed to France Ambassador to Nigeria, Jérôme Pasquier.

According to Onoja, the European nation alongside its former colonies are frustrating Nigeria’s counter-terrorism efforts over the crude oil and mineral deposits found in the Lake Chad Basin.

“We decided to pen down this open epistle to you and by implication, the French Government to express our deep concerns over some suspected developments, actions or inactions by the government of your country in the festering Boko Haram and Islamic State West Africa Province (ISWAP) terrorism in Nigeria, particularly in the Northeast region,” Onoja wrote on behalf of CATE.

“We dare submit that wittingly, Nigeria’s war against terrorism is greatly hampered for lack of adequate cooperation or outright sabotage of its efforts by her neighbouring countries, the former colonies of France.

” The game plan is to keep the Lake Chad Basin area permanently unsecured for Nigeria to be unable to embark on crude oil prospecting on its own side of the Lake Chad and legitimate boundaries; while the same resources are illegally or stealthily tapped by partners in this criminal cartel.”

CATE said it is disappointed with France’s “lukewarm posture” to terrorist activities, adding that the country’s silence is a sign of guilt.

The group recalled how the French failed alliance with its ex-colonies almost jeopardized Nigeria’s progress and the European nation’s failure to prosecute eight of its nationals fighting on the side of Boko Haram since 2017.

“In 2017, France organized a security summit to discuss Boko Haram. And months later, it launched the G5 Sahel Force at a conference with French President Emmanuel Marcon in attendance together with leaders of Niger, Chad, Mali, Mauritania, and Burkina Faso. Shortly after the French Summit on Boko Haram, remnants of the sect which escaped from Nigeria into Niger and Chad bounced back stronger to launch attacks on Nigeria,” Onoja stated.

“There were strong indications that the Nigerian Military decimated Boko Haram to near defeat in 2017. But curiously, the sect resurged suddenly after the formation of G5 Sahel Force, and with attacks from their safe havens in France’s former colonies, but not a whisper was heard from the French Government as reprimand.

“Strangely too, Nigeria’s militia fighting Boko Haram  known as the Civilian JTF, Internally Displaced Persons and several survivors of Boko Haram attacks  admitted through eye witnesses narratives the  airdrop of supplies to the terrorists across Nigeria’s borders with her francophone neighbors of Cameroon, Chad and Niger, a violation of the UN Global Counter-Terrorism Strategy stipulations endorsed  by all member-states.

“Several security experts and analysts as well as intelligence reports have fingered Chad and Niger as offering transit routes through their countries’ borders for the movement of large cache of arms and ammunitions to Boko Haram insurgents. It is the weapons supplies that embolden Boko Haram atrocities in Nigeria, but France is suspiciously silent over the development by her former colonies.

“CATE is also concerned that the French Government refused to prosecute eight French nationals fighting on the side of Boko Haram and were ‘mistakenly’ arrested by Cameroonian forces in 2015.‎ The serving French Foreign Minister at that time, Mr. Lauren Fabuci ordered Cameroun to transfer the suspects to France for presumed prosecution. But thereafter, the suspects are not known to have been subjected to any trial by the French Government in contravention of international laws on counter-terrorism.”

CATE, however, warned France to quit the silence and genuinely support Nigeria to flush out of Boko Haram remnants for the “utmost benefits to citizens of both countries who share very close affinity that dates back to centuries  to decisively work together to defeat Boko Haram terrorism”.